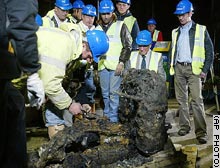 A crew of aviation archeologists excavated a World War II airplane in London over the weekend, digging beneath a paved road near Buckingham Palace. Parts of a Hurricane’s engine and control panel were found as the airplane’s pilot, Ray Holmes, now 89, watched and live TV cameras rolled. Holmes saw the German bomber heading for the palace during the Battle of Britain in 1940, but he had run out of ammunition. “What goes through a young pilot’s mind as he confronts the Germans?” asked the TV host. “Nothing particularly,” answered Holmes. “Except he just has to go and have a bash at him. That’s all.” So Holmes rammed into the enemy plane, which crashed at Victoria Railway Station, then bailed out of his own disabled aircraft. The program, broadcast live on Britain’s Channel Five, focused on aviation archaeologist Christopher Bennett, who has been investigating the story for 12 years, trying to pinpoint the exact position of the remains through historical research, photography and ground-penetrating radar. Bennett said: “‘Fighter Plane Dig Live’ is the culmination of a project that has taken hundreds of hours of work. After all these years I’m delighted we’ve got permission to excavate.” The program also followed a second team in Germany as they excavated a Spitfire buried in woodland and believed to be one of the last Spitfires involved in air-to-air combat during the war.