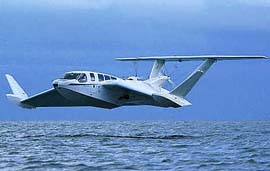 Travelers between Juneau, Skagway and Haines, Alaska, will soon have the option of “flying” without ever leaving the ground (effect). Pacific Seaflight is planning to launch its eight-passenger “wing in ground effect” vehicle in time to take passengers next summer. The Australian-designed Flightship FS8 Dragon Commuter (scroll down for English) is now being built in Florida and will whisk patrons at 85 knots skimming eight feet above the cold Pacific. It’ll cover the distance between Juneau and Haines in 55 minutes for a one-way fare of about $60, said company president Linus Romey. Ground-effect vehicles are nothing new but this is believed to be their first commercial application in North America, Romey told the Chilkat Valley News. Although the Flightship most certainly flies, it’s not considered an airplane by the government. Instead, it’s regulated as a small passenger ship, which really cuts the overhead. The Flightship is powered by a Chevy engine and Romey said that once it lifts off the water the ride is “as smooth as you can imagine.”