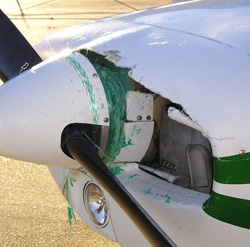 Nah, not really, but it sort of seems that way to CFI Kevin Morris. Morris, a Shreveport, La., flight instructor, got quite a scare last week — he called it the most intense few moments in his flying career — when the Cessna 150 he was in struck a kite string just after takeoff from Runway 14 at Shreveport’s Downtown (DTN) Airport. This “string,” though, was braided nylon rope that wrapped around the spinner and almost immediately starting chewing away cowling and melting onto the windshield. As Kevin looked up after a brief gauges check at about 500 feet MSL he saw the box kite looming. “No problem,” Kevin told AVweb. “A big box kite is easy enough to evade.” If only that was all there was to it. As he took the controls from his student pilot to maneuver around the kite the prop caught the rope, wrapping it up like a winch. A significant drop in power and severe vibrations followed, but Kevin was able to nurse the plane around to Runway 23 and set it down safely. “It all happened so fast the student pilot didn’t really know what was going on,” Kevin says. “I am just so thankful he wasn’t up there alone.” Local police tracked down the box kite culprits … young people in a nearby neighborhood who had lost their kite in gusty conditions. Morris is now the local airport “hero” but is hoping against a repeat performance.