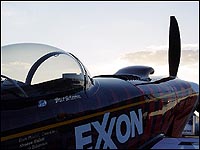 Never-say-die recordseeker Bruce Bohannon has been trying for a year or so now to push his highly modified RV-4, the Exxon Flyin’ Tiger, up to 50,000 feet, and keeps coming up short. “We bolted an extra 18 inches onto each wing, and there were no gains at all,” he said Wednesday morning at a Sun ‘n Fun press conference. He and his team kept trying, tweaking the prop and the aerodynamics, and made multiple attempts with little progress. At one point, Bohannon said, they were about to accept that maybe 47,500 feet is just as high as you can get in an RV-4. But that didn’t take, so now former astronaut “Hoot” Gibson is working with Bohannon to design a new wing extension that will add 8 feet to the end of each wing, stretching the wingspan from 22 to 38 feet. “And if that doesn’t work, we’ll start over with a totally new airfoil,” Bohannon said. Sounds like they are not going to give up till they get there. Future attempts though, will be made from Bohannon’s home field in Texas, not in front of crowds at an airshow. The logistics are just much easier at home, he said. Bohannon so far has set 30 world records with the Flyin’ Tiger.