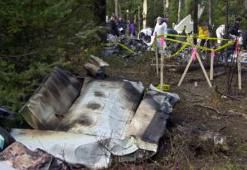 The flight crew was to blame in the crash last year of a Raytheon (Beechcraft) King Air 100 carrying Minnesota Sen. Paul Wellstone and seven others, the NTSB said Tuesday. Neither icing nor crew fatigue were factors, according to the board’s findings. The flight crew failed to maintain adequate airspeed on approach, stalled, and did not recover. “This tragic accident … points out the need for more aggressive action to improve safety in the on-demand charter industry,” said NTSB Chairman Ellen Engleman. The crew members, according to the report, both had shown below-average flight proficiency, and the charter operator had not trained them properly. The King Air, operated by Aviation Charter Inc., was on a flight from St. Paul to Eveleth, Minn., when it crashed on approach to the Eveleth-Virginia Municipal Airport on Oct. 25, 2002. The airplane was destroyed and there were no survivors. The NTSB said the flight crew failed to maintain an appropriate course and speed for the approach to Eveleth and did not properly configure the airplane at the start of approach procedures. Both crew members, the NTSB said, had “previously demonstrated serious performance deficiencies consistent with below-average flight proficiency.” It could not be determined which crew member was flying at the time of the accident. Also, the charter company was not training its pilots in crew resource management in accordance with its FAA-approved training program. Consequently, the NTSB recommended that the FAA make such training mandatory for Part 135 on-demand charter companies that conduct dual-pilot operations. The FAA also should conduct en route inspections and observe training and proficiency checks at all Part 135 on-demand charter operations, the NTSB said. Additionally, the board recommended that the FAA convene a panel of experts to determine the feasibility of requiring that low-airspeed alert systems be installed in airplanes engaged in commercial operations under Parts 121 and 135, and act accordingly on the panel’s findings. A synopsis of the accident investigation report, including the findings, probable cause, and safety recommendations, can be found at the NTSB Web site. The complete report will be available in about six weeks.