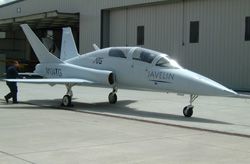 While the Paris Air Show, held every other June at Le Bourget, is mainly about big airliners and beefy military aircraft, there’s a fair amount of news there for the lighter, GA end of the industry. Among the latest out of Paris this week, Grob, a German light-plane manufacturer, introduced the first test model of its new “utility jet,” a 10-seater built to operate from unimproved runways. The jet has a roomy, quick-change cabin that can also accommodate cargo loads up to about 2,500 pounds. Aviation Technology Group introduced the Javelin Mk-20, the military-trainer version of its two-seat very-high-performance Javelin Executive Jet. The prototype of the civilian version has recently started taxi tests. “The aircraft has successfully taxied and run its engines and systems,” said ATG CEO George Bye. “It will not be long before we see this remarkable, high-performance jet take flight.” The Executive Jet sells for $2.8 million. Israel Aircraft Industries (IAI) has joined with ATG to develop the military version, which is designed to fly at about 0.9 Mach. Dassault also showed its newest bizjet, the $40 million Falcon 7X, in its first public flight. The three-engine 7X is the first corporate jet with a fly-by-wire flight control system. Also, representatives from Japan and France are reportedly discussing plans at the show to develop a new supersonic successor to the Concorde. They team would split the investment to build the aircraft and hope to split the time from New York and Tokyo, shaving it down to six hours. Hopes would see the 300-seat speeder flying in 2015. The Paris Air Show opened on Monday and continues through the weekend.