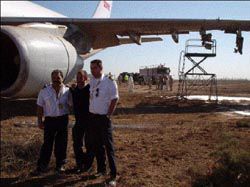 The prestigious Guild of Air Pilots and Air Navigators in Britain has given one of its highest honors to the crew of a DHL Airbus A300 who landed the plane (stuck in the trim position for climbout) apparently using only the thrust from the engines to control pitch, attitude and direction. The pilots, Capt. Eric Genotte, First Officer Steeve Michielson and Flight Engineer Mario Rofail, were presented the Hugh Gordon-Burge Award, which is for outstanding airmanship in saving an aircraft. As AVweb showed you earlier this year, the Airbus made a spectacular — and safe — landing in Baghdad about 25 minutes after being hit by a missile while taking off. At the time, news of the miraculous landing was the stuff of urban legend and there was much speculation about its veracity. The award and its narrative seem to clear up any doubt that this was an impressive piece of flying. Hats off to the winners from AVweb and its 130,000 subscribers world wide.