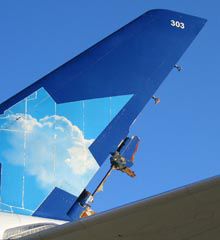 The NTSB is “closely monitoring” the Canadian investigation of an incident involving the almost total separation of the rudder on an Air Transat A-310, an aircraft similar to that which crashed in New York three years ago due to a rudder failure. As AVweb told you on Thursday, the A-310, with 270 passengers and crew on board, was about 30 minutes into its flight from Varadero, Cuba, to Quebec City when, according to the airline, “a portion of the rudder detached from the aircraft.” Photos supplied by an AVweb reader might suggest slightly different wording. Semantics aside, the NTSB has taken an interest with recollection of the American Airlines A-300 that crashed in a New York suburb in November of 2001, killing a total of 265 people following separation of a large section of vertical fin. The NTSB blamed that failure on extreme control inputs overstressing the rudder. There’s no indication of similar circumstances in the Air Transat incident. The airline says the plane was flying normally at cruise when the rudder simply fell off. NTSB spokesman Ted Lopatkiewicz told the English newspaper, the Observer, the board is watching the Canadian investigation but not jumping to any conclusions. “We need to know why the rudder separated from the aircraft before knowing whether maintenance is an issue,” he said. The plane had just come out of an A-Check five days before the incident but it’s not clear whether the rudder was inspected and in what detail.