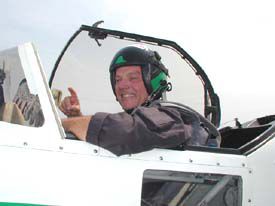 Tributes are pouring in for a respected aerobatic pilot who died in a crash in Florida on Friday. Ian Groom, 58, was practicing a flat spin, which he’d earlier said was his signature maneuver, but for unknown reasons his Su-31 didn’t recover and crashed into the Atlantic about 2,000 feet offshore from Ft. Lauderdale. Groom was quickly recovered from the crash site but rescue workers couldn’t save him. Groom was preparing to perform in the annual Air and Sea Show, which went ahead as scheduled. Saturday’s air show was dedicated to Groom, and the Canadian Armed Forces Snowbirds flew a missing-man formation in tribute. Although Groom was best-known for his aerobatics career (in 2002 he set a world record flying 57 snap rolls in 26 seconds), he also helped others avoid accidents. Groom, who was originally from South Africa, became a U.S. citizen in 1995. After 9/11 he volunteered to provide upset training to pilots with Immigration and Customs Enforcement. He trained more than 100 pilots in methods to recover from aircraft that had gone out of control. Groom was also a certified flight instructor, an FAA accident prevention counselor, a quality evaluation pilot of the U.S. Naval Test Pilot School, the holder of an FAA level-one waiver, and an aerobatics competency evaluator (ACE). He is survived by his wife, Mimi, and son, Daniel.