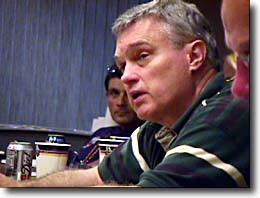 Jon Jordan has overseen major changes in medical certification which went into effectin September, 1996. He also appointed the first new Director of the Civil Aviation MedicalInstitute (CAMI) in over two decades, Dr. Warren Silberman. I had the opportunity tointerview Dr. Jordan at EAA AirVenture Oshkosh.

Dr. Jordan, EAA’s Aeromedical Council holds a forum at theannual convention. The Council informally judges how many problems pilots are having withtheir medicals by the attendance at the forum. Since the changes in the medicalcertification regulations in 1996 and your appointment of Dr. Silberman to CAMI, there hasbeen a huge decrease in the number of people at the forum! What is going on?

That’s good and bad. Obviously they are not having as many problems. However, it may also mean some have medical problems and are not working within the systemBeither giving up and not flying or flying illegally.

Do you seen anything changing like self certification for third class medicals?

That’s hard to say and a very complex issue. Glider and balloon pilots experience has been very positive. For those pilots, self certification has been a means of assessing a person’s medical qualification based on their knowledge of their medical condition. No significant number of accidents, maybe one or two, have been attributed to medical problems in this group.. So if you look at the record, Safety has been held intake.

Have to look at operational responsibilities of the pilot, take into considerations the type of environmental situations they could be come in like weather, type of airports, operational issues and impact on the non flying public or on the flying public who shares airspace.

Do you worry about guy with third class who is flying a Lear jet?

Our biggest concern is for people who hold them self out to fly for compensation or hire. The person who flies free of charge and on invitation is similar giving some one a ride in a car and the passenger assumes a certain amount of responsibility. The third class medical carries a different expectation from a public conveyance which requires a first or second class medical. The not for hire skill is not what you would expect from public conveyance and you assume a certain amount of risk.

Would you extend the assumption of risk to a pilot who by himself?

Exactly . That is why I get around that particular issue mentioned earlier about the type of operations and the number of passengers., major part of looking at question, the numbers . By intention, private pilot third class holders are allowed to take certain risk we would not allow an air carrier to take.

Have you seen any effect from changing the duration of third class medicals to threeyear durations for pilots under 40?

We haven’t had enough time to assemble any significant numbers but I think the impact will be minimal.

What about antidepressants? Will pilots ever be able fly on them?

I would not say it is something that is not going to happen. We have to approach it very . Psychoactive medications present certain problems and side effects as well as the underlying conditions they are used for. We have to be very cautious. After a few years of experience in clinical medicine, and if there comes a point in time when we fell comfortable that they are safe, their use might be approved.

How do you come to that point?

Based on experience and clinical application.

What about testing pilots in simulators before and after using antidepressnats tosee if it affects performance?

It would be of value but I don’t really think it will answer the question. Trying to determine a person’s cognitive function in relationship to aviation safety is extremely problematic mainly because they is low baseline criteria associated with pilots. It would take a great deal of extensive research and time to come up with consistent criteria. 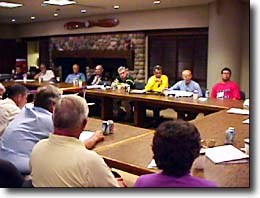 My experience in family medicine leads me to believe some pilots would benefit fromantidepressants. Assuming endogenous (chemical) depression is present in a pilot nottaking medication to keep medical, which is more unsafe, on or off medication?

Another facet of the issue. But simply because a person or group uses a medication extensively or hide some medical conditions because they know if they expose it to FAA, they may end up losing they medical certainly doesn’t make a good argument that the FAA should simply certify those people. We have a responsibility to the public. And I am sure there are those pilot who have those conditions and on these medications. That are not permitted by the agency, but I don’t’ think there is any alternative for the Agency since it is directed by the congress and public and there is no call to do anything other than what we are doing.

What about pilots who have a medical condition which does not require interventionby clinical standards but the FAA requires a intervention?

Certainly this present a dilemma for the FAA, the physician, most certainly the pilot. There are certain situations from a risk analysis point of view we cannot qualify an individual without treatment. We can’t push them into a treatment if it is not recommended by their clinician. It is similar to the SSRI situation, we cannot change our position in regards to safety. We do not like to push the pilot into a treatment. The airman has to make a very difficult decision. We have responsibility to the public. We have no other choice than to take the position that we do.

The EAA honored the FedEx crew that was assaulted by a certified pilot. How did heslip though the system?

Psychiatric disorders are very difficult to deal in terms of identification and in assessing risk to aviation safety. This is one of areas that really concerns me, Maybe even more than anything else. Because of the unpredictability of psychiatric disorders manifesting itself as it did in the FedEx situation. I can’t say he slipped though the system. But simply the system and the speciality of psychiatry is not highly sophisticated to the point where you can accurately predict situations where a person will or will not have a problem compared that to cardiovascular situations where the mechanisms and tools we use are more sophisticated and specific. psychiatry is much more difficult to deal with.

Do you think we will ever get to a cognitive screen or other psychiatric testing aspart of the medical?

It is hard to say it will become part of the routine exam. Cognitive testing is highly controversial at the present time. I think it will remain so in the foreseeable future. We are using neuropsychiatric testing in several areas of medical certification, especial in individuals who have had substance abuse, head injuries., brain tumors which have been remove, and other settings. In those situations, it has worked pretty well assessing a person’s ability to perform. When you get in to areas of progressive neurological disorders, it is problematic (due to the practice effect). We are using it currently to assess people who are HIV positive. We are going to watch this and see how it works out. I think it is possible that we could at a future time not require test if it does work out. On the other hand, if something is developed which is not susceptible to the practice effect becomes available to us, it will help us assess special issuance airmen.

Not one person brought up Bob Hoover’s name at the forum. I think people haveforgotten that episode.

I haven’t forgotten that and don’t think I ever will. 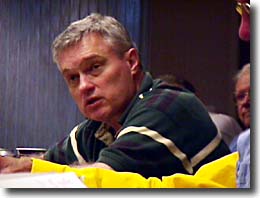 Do you see any major changes coming up?

I feel satisfied with the approach we are taking with airman certification. Due to the flexibility we have, our experience and due to the explosion in medicine of new techniques which allows you to better assess individuals and determine what is going to happen to them in the future, we are working diligently at the present time in smoothing out our certification process. We have had problems with it in the past. It has been a labor intensive operation. We have automated in the past. Actually our system is one of the oldest in the FAA which also tells you it is probably outdated and needs to be replaced. We are using current technology is terms of developing and updating the system for processing certificates. Our objective and maybe off in the future someplace is same day certification that is when the airman enters he office of the AME, the physician conducting the examination will have technology which will allow the decision to be made on the spot. Not only those airman who meet the standards but those with medical conditions which now require protracted review.

Anything else you want people to know?

I would like to emphasize that I know there is great deal of fear with the airman regarding the system. And there is probably some justification for that. If the person develops a medical condition that might be considered disqualifying, obviously the agency want to secure the necessary information to determine whether that person is a risk. I think that has a tendency to drive some airman underground. I am also concerned that the agency is extremely conservative in making determinations. That concerns people about their future eligibility for certification and should not concern them. They need to keep in touche with the FAA, with the medical certification personnel, and with our AMEs to find out what exactly it is the agency does in terms of medical conditions. I have familiarity with airman to who are so concerned about high blood pressure and what it will do to their certification status, it is almost irrational. Folks need to not be overly concerned about losing their medical certificate as we end up disqualifying very few when you look at the total number of applicants. unfortunately, they are conditions which do require further investigation and this has a financial impact on the pilot. We try to minimize that but sometimes we have to asked for sophisticated testing. My best advice to the airman is if you have a medical problem or concern, talk to a physician who is knowledgeable about aviation medicine and the certification practices of the agency.