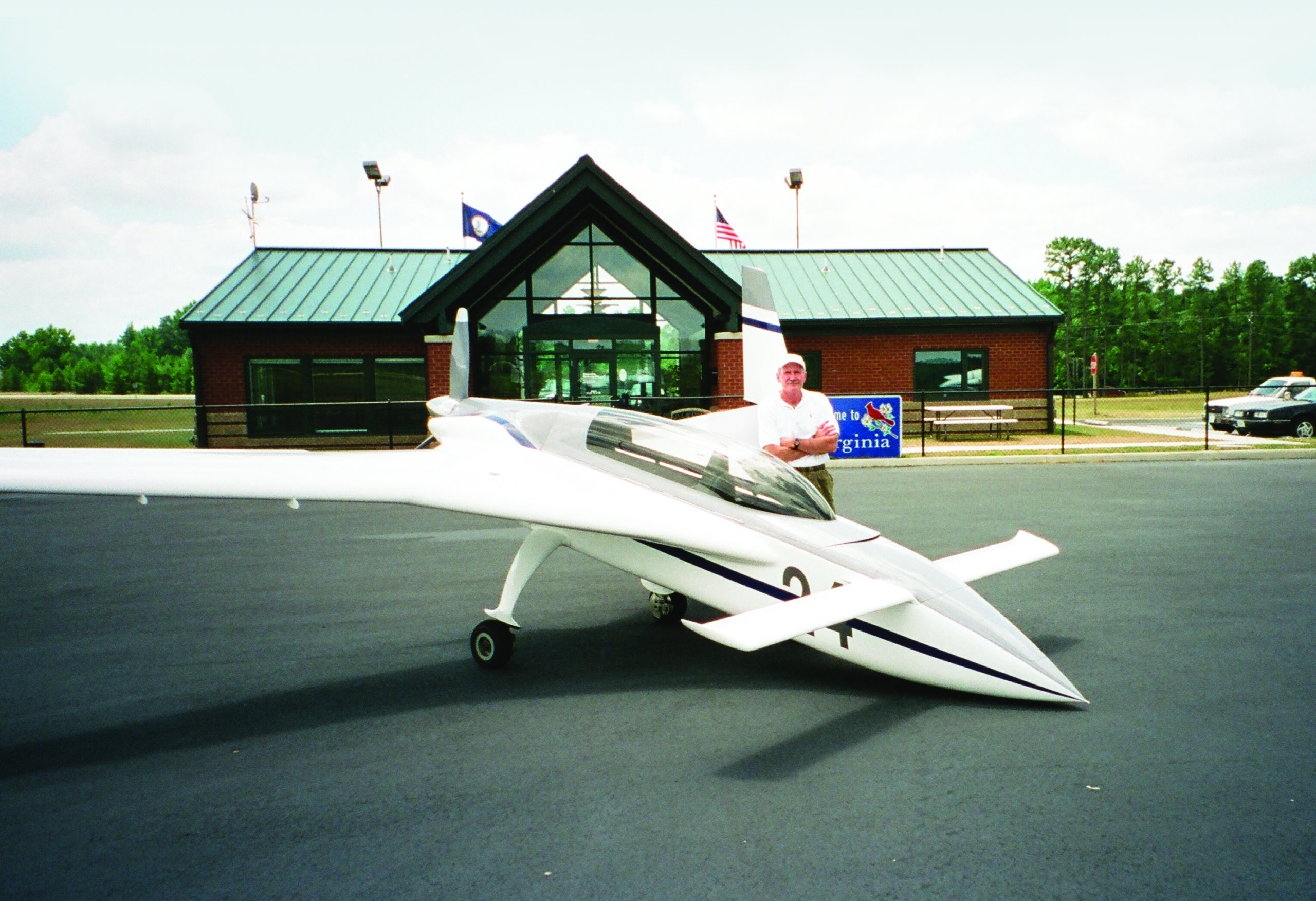 Not long after the gas crunch of the late ’70s, I became aware of the buzz regarding a new homebuilt aircraft from this fella Burt Rutan. It was supposed to be ultra fuel efficient, unique in appearance, and built in an almost revolutionary way, sort of like a surfboard. With a lot of time spent in the ocean and having owned a surfboard or two, this concept had immediate appeal. When I first saw one of these aircraft at a local airport, I was smitten. Not long after a ride in the back seat of a canard aircraft, I sent off a check for the plans.

Like many Long-EZ builders, construction took me about three times as long as expected. It was, however, enormously educational, a source of many new friendships, and as each significant step was completed, quite satisfying. In the end I was very happy with the selection of a canard airplane and thankful for the experiences and scenic adventures it brought into my life.

The Long-EZ seemed an ideal aircraft to get a taste of extended range flight, and I was determined to build mine as light and straight as possible to maximize range and speed. When construction was complete, my empty weight was lower than most even though my plane was fully IFR instrumented. A heated garage had helped a lot; all of my composite work was done at 72 degrees or warmer.

After a year or so of general flying, I was comfortable with the characteristics of N14DL and flew non-stop from San Diego to Seattle, then later from San Diego to Stennis Airport near the Gulf coast of Mississippi. I enjoyed these flights and began to consider a much bigger challenge: Hawaii.

For a flight to Hawaii, there were two requirements to be dealt with: fuel and communication. I built a tank that exactly fit the space the back seat had occupied, which provided 40 additional gallons and increased total capacity to 96. The second hurdle, communication, was more difficult. HF (high frequency, or long range) radio was difficult to get working reliably in a composite aircraft. I sought advice and tried several fixes. For an antenna I used a trailing wire that emerged out the bottom of the left winglet. I tried a couple of reel arrangements so I could extend this wire once airborne. This proved difficult, and in the end, I simply taxied, took off, and landed with this thin, braided flexible wire in tow. With the addition of a Coast Guard-approved inflatable life raft and emergency beacon, plus a relief tube, I was set to go.

On July 12, 1996, I took off from Palomar Airport in northern San Diego County and headed for Hilo on the “big island” of Hawaii. EZs are not noted for their braking, and I considered the very heavy takeoff the most hazardous part of the undertaking. An extensive low-level cloud layer covered the ocean, and I flew west for three hours before the clouds abated, and I looked down to see a sobering sight: the surface was covered with white caps. I estimated wind speed on the ocean at 30 knots or more. Ditching and surviving in those conditions would be difficult at best.

As I approached the halfway point of the flight, roughly 1000 nautical miles from either airport, I decided to rely on a feature of the GPS that I had grown accustomed to: the NRST feature. I reasoned that when approaching the halfway point, this function would first show San Diego, then Hilo. But when I punched the NRST button the screen showed a message I had never seen before—NO NRST. My heart sank as I thought about how very alone I was there in the middle of the Pacific. (Later I learned that this was a standard GPS reply when more than 500 miles from any suitable airport.)

I would like to write that the rest of this flight was routine. But with several hours yet to fly, I forgot to shut off the electric fuel transfer pump, and when it ran dry, it made a much louder sound that got my immediate attention. I realized then that I had pumped all of the remaining aux tank fuel out through the left main fuel vent. Faced with the prospect of ditching short of Hawaii, my first reaction, surprisingly, was how embarrassing this was going to be. Fortunately, the trade wind was now stronger than forecast and was giving me an additional push. I landed in Hilo in just over 14 hours with a reasonable amount of fuel remaining.

After a five-day stay that included overflying a lava field that was flowing into the ocean, I was ready for the return trip. I took off from Kona at daybreak and climbed as high as my oxygen supply would allow to minimize the trade wind effect. Now flying opposite the sun’s direction, the day seemed unusually short. With no moon and no lights on the surface it was a very dark night. Trade winds did not diminish as forecast, and I had to slow to maximize range. Palomar airport had the usual early summer overcast requiring an IFR approach. I landed 45 minutes after midnight for a total of 16 hours flight time. My wife Mary’s flight back from Hawaii misconnected, and I was met by, well, no one.

Off To The Races

For the next three years I took part in most of the Rutan Aircraft Canard Enthusiasts (RACE) competitive events held four times a year in the western states. These are triangular-course races of roughly 100 miles. To stay with or, better yet, ahead of the other competitors in your class requires spending many hours of tweaking to reduce airframe drag and maximize engine performance. My wife felt I became obsessed with this pursuit; and she was right. At Wendover, Utah, my Long-EZ set a class record of 236.928 mph. In this process, I grew familiar with and landed in most of the western states.

In the summer of 1999, it was off to Oshkosh to enter the aircraft judging competition. I was awarded a Champion Lindy for plansbuilt aircraft, and later an article appeared in the organization’s magazine about my airplane and the Hawaii flight.

The challenge and excitement of flying to Alaska had also been of special interest. In late May 2000, I left San Diego with excellent forecasts for our 49th state. But getting to the Canadian border was another matter. I dodged and flew under rain showers through a good part of Oregon and Washington. Finally, on the third day, I left Bellingham, Washington, and was soon northwest bound in the straits of Vancouver Island in beautiful clearing weather. This is the much lesser used coastal route to Alaska, and it is stunning—featuring hundreds of islands, pristine lakes and towering forests that grow right to the water’s edge.

I flew non-stop to Yakutat, Alaska, and after spending two days I was off again in clear weather, passing abeam Mt. St. Elias, which is 18,040 feet high yet less than 30 miles from the coast. Impressive. I crossed over the Kenai Peninsula where snow was so widespread and deep the terrain looked like sharp mounds of vanilla ice cream. After refueling at Kenai, I flew abeam Anchorage and Mt. Denali, then through Windy Pass (aptly named), and on to Fairbanks.

The fifth day of this trip was to be my shot at the North Slope, and I took off the next morning following the TransAlaska pipeline. After crossing the Arctic Circle, I continued toward Atigun Pass, the somewhat infamous crossing point over the east-west Brooks Mountain range. There was a lot of cloudiness, but it was smooth and I was able to maintain good ground contact. When I finally reached the pass, I had been forced to climb to 13,000 feet and was shivering from the very low temperature. My reward was precipitation in the form of tiny ice crystals. They filled the sky with bright sunlight reflecting off untold millions—magical.

With the pass behind, it would now be a simple matter of a gradual descent to the level tundra of the North Slope and Prudhoe Bay. But it was solid IFR there, with low ceilings, falling snow, and a forecast high of 34 degrees even though it was now June. I reluctantly turned around and was soon through the pass a second time, now headed back to Fairbanks.

After a second night in Fairbanks, I flew to Whitehorse for Canadian customs, then on to Watson Lake where the airport is beautiful. The town, just a $20 cab ride away, is not. The following day, it was off again for what is known as The Trench. The first checkpoint is a gravel strip 160 miles away. Scenery continued gorgeous although I had to fly through forest fire smoke for almost an hour that reduced visibility to marginal VFR conditions.

Home again in San Diego, there were two developments: I submitted an application for the next year’s AirVenture Cup race, and a friend pointed out that since I had now completed the two most difficult challenges of flying to all 50, I should attempt the rest. I thought this was a great idea, and the goal was set!

The 2001 race started in Kitty Hawk, North Carolina, and overnighted in Dayton, Ohio, before completion of the second leg at AirVenture in Oshkosh. I looked at the states I would need to complete all 50 and planned my trip to Kitty Hawk to visit as many as possible. Leaving a few days early with race #24 decaled on the fuselage, I landed in 11 states before arriving in North Carolina for the start of the Cup race.

The last leg of this 2001 race found all entrants landing in Aurora, Illinois, to wait out weather before continuing. At the finish line over Lake Winnebago, I placed third in my class behind the fast Hammer brothers. On the way home to California, I landed in five additional states, leaving just 15 remaining.

The winter rolled by as I planned one last trip to visit the states I had yet to land in. I left home in early July and flew to the Northeast where I thoroughly enjoyed a special part of our country that I had never become familiar with. Maine and Vermont seemed particularly beautiful.

In the late afternoon of July 18, 2002, I landed in Freemont, Michigan, amid moderate rain showers—my 50th state. As I sat on the ramp with the canopy closed to avoid getting soaked, I reflected on the completion of this goal. It felt wonderful, and as I started westward toward home the next day, there was a smile on my normally impassive face that lingered for miles.

David Lind lives on Indian Creek in the Sierra Nevada. Retired from United Airlines, he has three children who are airline pilots.

This article originally appeared in the August 2019 issue of Kitplanes magazine.