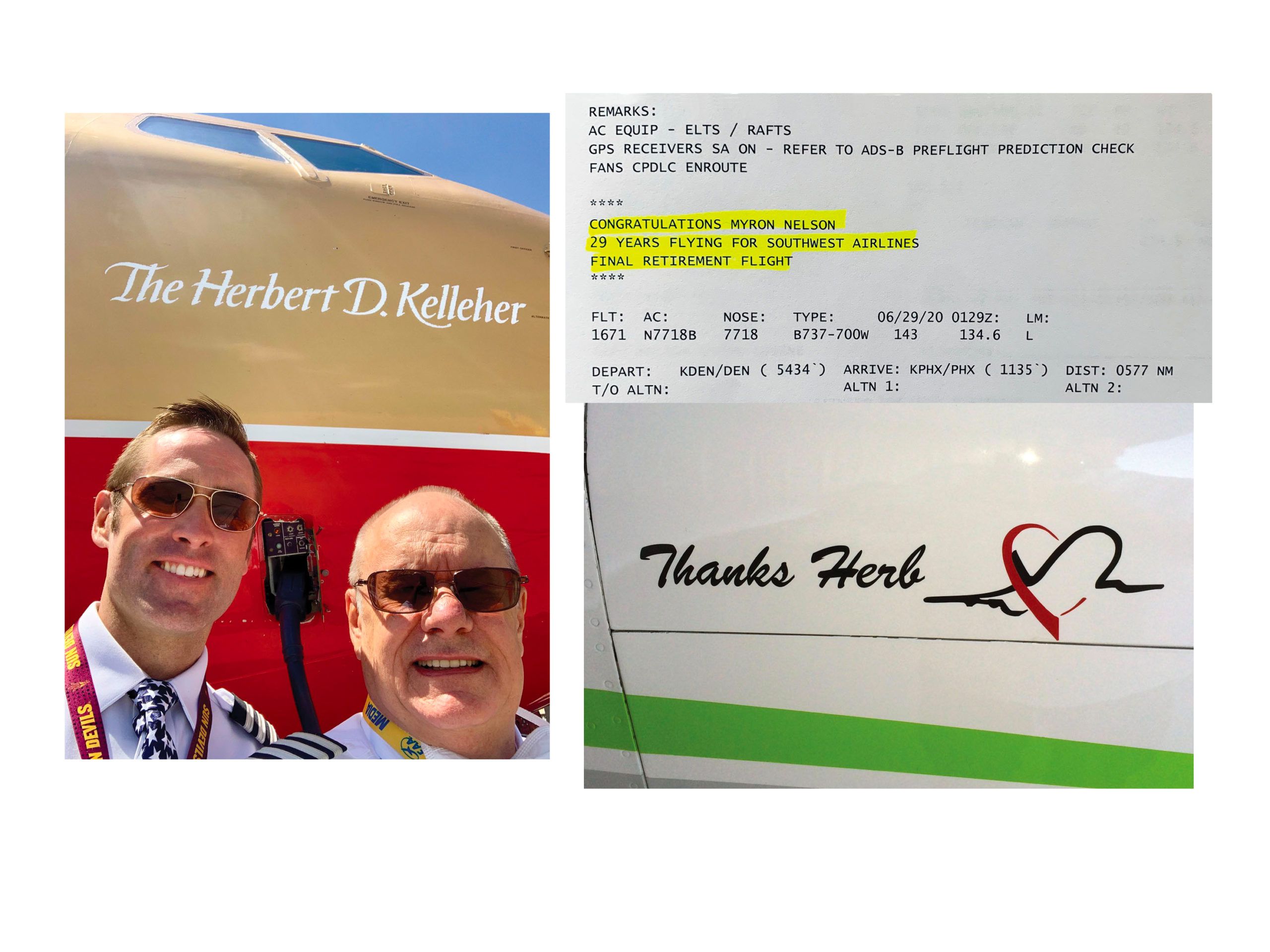 As I write this, it is August 31, 2020, which wouldn’t normally mean anything to anybody, especially me. Except for this particular day is my official termination (retirement) date as a pilot for Southwest Airlines. Because of accrued vacation, I flew my last official trip a few weeks ago and I turned in my airline ID and company owned materials last week, but today is when it all officially ends after more than 29 years with the company, 35 years of flying for my full-time living and 45 years since my first solo. Unlike a lot of my industry mates, I have had a blessed career of fortunate timing.

I could have actually continued another four years before forced retirement, but the wretched Covidity Blues inspired my company’s efforts to make an attractive offer to we seasoned types to ease involuntary furlough pressure on the young and junior. Of which, not incidentally, my own son Riley is one. I was blessed to fly my last official three-day trip with my son in the right seat—and our wives riding in the cabin. I even won the landing contest on the last “roller” after trailing in points for most of the trip. Every pilot/father should be so lucky and blessed.

It Must Be Real

The emotion of the last airline trip really didn’t hit me until seeing a kind note from dispatch on the last flight release. I don’t see this retirement change as an end as much as simply a transition. I think retirement would be much more emotionally impactful if it truly were a grounding for good, as it is for some. For those of us blessed to fly general aviation, especially Experimental/Amateur-Built, it’s just more time available to further enjoy some of the most rewarding flying of our lives.

However, this whole retirement process has caused me to reflect on one painful reality and that is that every pilot will eventually reach the point that it’s over, or at least should be. Sometimes it is a gentle transition and sometimes abrupt. Sometimes it ends in a doctor’s office and, tragically, sometimes in an accident or incident. Three pillars of good pilotage are judgment, skill (training) and experience. Unfortunately, it is a fact that abilities degrade after a certain point. Sometimes a weaker memory can be temporarily masked by wisdom and good habits gained by experience, but every pilot will reach a time when it is appropriate and wise to trade the high-performance, all-weather rocket for a fair-weather Light Sport to extend the avocational range a bit. Or it might be best to simply close out the logbook altogether.

Degradation of abilities is common with aging but not linear to specific age. We’ve all known pilots who were still Steve Canyon in their 80s and others were considerably over corporal TBO in their 60s. We need to watch out for each other and be prepared to listen and take heed when someday someone is actually watching out for us by saying something that may be painful to hear.

I believe that we are all part of a great community of shared interest that spans many generations. My wife commented at Oshkosh that she never realized there are so many of us avgeeks. Those of us fortunate enough to still be in the sweet spot of activity owe a debt of gratitude to our forefathers and a responsibility of legacy to those coming up behind us.

A couple of years ago, a neighbor asked if I might be interested in taking his dad for a ride in my airplane. He explained that his dad had been a pilot for most of his life and had owned many aircraft, but hadn’t flown in several years. While physically spry beyond his years, the fellow was suffering the devastation of Alzheimer’s and was now totally dependent upon his son and his family.

When the day came, none of us were sure what to expect. We sat him up front while the son and daughter-in-law rode in the back. He fumbled with the typical Van’s double shoulder straps, but we eventually got him situated. He only spoke one or two words at a time. I asked him if he wanted to wear a headset and he just nodded in the affirmative.

Once we got into clear airspace, I switched the EFIS to the six-pack setting—making it look like regular round gauges—showed him where the trim was and invited him to take the stick. I had no idea what his reaction would be, but kept my hands near just in case. To our surprise, he took the stick confidently but with a proper pilot’s touch and said, “Where do you want to go?” I glanced back at the son, who was beaming. I told him that he was in command now and could go wherever he wanted. Then I suggested perhaps a couple of maneuvers to help him get the feel of the airplane.

What happened next was nothing short of stunning. He sat upright in the seat, rather than his normal slouch, and began what was a remarkably precise Lazy 8, but not before clearing the area of traffic. (Good training sticks.) Even though the RV-10 is not a particularly rudder-intensive airplane, I watched in amazement as, with every bank, he input rudder seemingly by instinct, thereby keeping every turn perfectly coordinated. He spotted a lake off in the distance and pointed toward it. I said, “Let’s go.”

Even though I had told him that I would operate the engine for him—something I usually do for every guest flying my airplane—he reached over and backed the throttle off a bit for a gentle descent for a better look at the lake. But what really amazed me was that he tenderly advanced the mixture in as well for the descent, something I often chide myself for forgetting. As we were circling the lake, he grinned. It was like something deeply dormant had awakened—even if only for a moment.

His family had cautioned me beforehand that he didn’t have much range away from a bathroom. So far too soon it came time when his son thought we should head back. I punched up the home airport on the map and told him to follow the magenta line. It was the only time his brow furrowed with confusion so I just pointed him back toward the field and told him to descend to 2500 feet for pattern altitude. I was going to let him keep flying as long as he kept flying, but the moment I called the tower and got a machine-gun response, he held up his hands as if to silently say “your airplane.”

When I took the controls, the airplane was in perfect trim.

When we shut down, he asked what engine the airplane had. I answered that it was a Lycoming IO-540, to which he responded, “big one,” with a smile of understanding. As we off-loaded on the ramp and were getting him back into the car, the insidious shell of that damnable disease started to envelope him again.

His family says he still talks about that morning of flying. He just can’t remember when it was or who it was with. The human brain is a wonder even when damaged.

As important and enjoyable as it is to fly Young Eagles, and it certainly is, I can attest that there is also tremendous satisfaction in taking a seasoned clipped-wing Eagle for a treasured ride. Or perhaps just an invite to the shop to work some Clecoes. A lot of us will be in those same idle shoes someday.

For general aviation to survive and thrive, we need to inspire and encourage the youth. Equally important, however, we need to respect, embrace and learn from those ahead of us who are now down and locked. We who are still blessed to be actively building and flying, well—clear prop and go fly. That avgas isn’t going to burn itself.