Jessica Dubroff died 21 months ago as a very youngpassenger in the left seat of a Cessna airplane. The pilot, in the right seat, took off ina driving rainstorm, in the thin air of an unfamiliar high-altitude airport, with thefuel-air mixture improperly set and the plane carrying almost a hundred pounds over itscertified weight limit. Without ever reaching a safe airspeed, he made a climbing rightturn into likely wind shear, lost control of the plane, and plunged into the ground. He,Jessica and Jessica’s father, in the back seat, were all killed instantly.

The official accident investigation found no evidence of any problem with the plane orits engine. Still, a group of Jessica’s surviving relatives has now sued Cessna and Avco,the companies that built them 20 years earlier — along with the pilot, the owner of theplane, and 100 "Does," or defendants to be named later. In some other universe,this might seem strange. In ours, it’s almost inevitable. 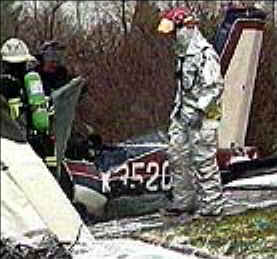 In the annals of aircraft litigation, the Dubroff case is almost ordinary. It isdistinguished mainly by the confused frenzy in the American press before and after theaccident: reporters saying and writing that Jessica was a "pilot," that she"piloted" the plane, and that she was trying to set a "record" as theyoungest pilot to fly across the country. There is no such record; no 7-year-old can pilota plane, legally or factually. The actual pilot was a 52-year-old stockbroker named JosephM. Reid — mystified by the willing self-hypnosis of so many writers and televisioncommentators. He had told his wife that the event was simply a matter of "flyingcross country with a 7-year-old sitting next to you and the parents paying for it."

Jessica had learned to handle the controls of a CessnaCardinal under limited circumstances, but this is a small part of the set of skillsrequired to fly. She was not at the controls when she died; it was Reid whose wrists, feetand ankles were shattered on impact. She was not capable of making the required preflightcalculations of weight and balance and density altitude, and Reid himself apparentlyneglected to perform these or ignored the results. Fully fueled, the aircraft was 96pounds overweight even for a takeoff at sea level, where he was accustomed to flying. Theairport at Cheyenne, Wyo., had a field elevation of 6,156 feet. Corrected for thebarometric pressure, temperature and humidity at the time of the fatal flight, theapparent altitude from the point of view of aerodynamics was even higher: 6,670 feet,meaning that the Cessna would climb slowly at best, and its stall speed would beprecariously high.

It was Reid, too, handling the aircraft’s radio communications, who failed to check theautomated weather briefing before taxiing to runway 30. He made many other basic mistakes,driven by the pressures of media attention, the National Transportation Safety Boardspeculated. In his rush to proceed into the rain and turbulent wind, he did not even pausefor a standard engine run-up and pre-takeoff check. At that point, he probably should haveapplied carburetor heat to prevent a buildup of ice and certainly should have leaned thefuel mixture for best high-altitude takeoff power, but he did neither.

The rain was pouring down as he took off — rolling on the runway even before clearancecame from the tower — and then, close to stall speed, he entered a turn, which wouldcause a further momentary loss of lift. At this point only a gust of wind or a misjudgedpull on the yoke would be needed to trigger the stall-spin that followed.

The plane and its engine had performed as designed through more than 3,000 hours offlight. Even an attorney for the surviving Dubroffs, Michael S. Danko of O’Reilly &Collins in Menlo Park, Calif., doesn’t really expect to collect damages from Cessna orAvco. "The thrust of the case is Joe Reid’s flying," he says. He hopes tocollect from Reid’s insurance policy. Yet the law makes it not only possible butobligatory for a plaintiff’s lawyer to sue everyone in sight, especially manufacturerswith deep pockets.

In the light aviation business, the consequences over the last two decades have beendevastating. The manufacture of single-engine aircraft in the United States fell from morethan 13,000 in 1977 to fewer than 500 in 1994. Cessna withdrew from the business for afull decade; another major manufacturer, Piper, was bankrupted. Liability litigation isnot a bad thing in itself — it has been a force for safety and responsibility. It ispossible to describe in a few words a legal system that would discourage frivolouslawsuits while still encouraging worthy plaintiffs to recover damages from negligentdefendants: Losers pay winners’ legal costs.

In the meantime, the most perverse victim of routine air-crash litigation has beenaviation technology itself. Major manufacturers have a strong disincentive to experimentwith new materials and radical aerodynamic designs. The few single-engine planes rollingout of American factories this year are little changed from their 20- or 30-oldcounterparts — less changed than the typical bicycle. Small-scale aviation has thusbecome one of the peculiar corners of applied science-along with some kinds ofbiotechnology, pharmaceuticals, pesticides, birth control — where the ever-present threatof litigation suppresses the good along with the bad.

Yet there is genuine technological ferment in the trenches of modern aviation: it hasmoved from industrial laboratories to home workshops. As the landscape offactory-manufactured small aircraft has diminished, a new homebuilt industry has thrived:planes with bizarre-looking wing and tail configurations, planes made of lightweightcarbon fiber and Kevlar instead of metal, planes that fly faster, with more aerodynamicstability and less thirst for fuel than their traditional counterparts.

And when one of these ingenious oddities crashes, there is generally no one to sue buta tinkerer in a garage.