It was a wonderful South African Sunday winter morning.Clear skies, still a bit cold, but the weatherman insisted it would reach25 C later today. Sigrid, my wife and a pilot, too, was preparing for theflight to Lindbergh Lodge.

Lindbergh Lodge is a private game and hunting farm in the North-Westprovince of South Africa. At an elevation of 4500′ on the highveld, itis home to a plentiful of plain game. Sigrid and I decided to return tothe place where our first cross-country took us after earning our privatepilot certificates.

Regula and Stefan were joining us. A Swiss couple, and our closest friendssince we moved to South Africa two years ago. Regula was looking forwardto a little horse-riding exercise. She had not been riding for while. Thechance of a close encounter of giraffes in their natural habitat was temptationenough for her, to try it again.

So we were heading for Grand Central, one of three General Aviationairports in the Johannesburg metropolitan area. 8.00 AM is a good timeto arrive at the airport. The Piper Archer, the 180 hp ship of this nicelittle flight school was already waiting for us. Sigrid checked out forhire and fly, while I did the pre-flight for her. Everything was all right,we only needed to top up oil and get some fuel.

Grand Central is beautifully located between Johannesburg and Pretoria.We had unusual wind from the South, so we are taking off the uphill runway17. Turning out right at 500′ AGL, over the Midrand industrial area, headingfor the wealthy northern suburbs of Johannesburg. Every house is surroundedby a well-maintained garden, and of course there is a swimming pool. Beautifulsights, these red roofs, green lawns and blue pools. Regula got excited.We had just passed their house.

Sigrid was leveling off at 7000′, just underneath Johannesburg air space.To the left of us, the skyscrapers of the New York of Africa, as Johannesburgis often called, looked so peaceful in the morning light.

We had about 90 minutes of flight ahead of us. The Archer was doinga good 120 knots ground speed, and our GPS told us that we were some 0.2miles left of track. Thanks to the Pentagon, we knew exactly where we were.Below us, there was a change of scenery. We ran out of wealthy suburbs,and we were coming up to the Westrand. To the right we could make out someof the mine dumps of the dusty mining town of Krugersdorp, and to the leftthe township of Soweto, which got a lot of news coverage during the upraisesof the 1970’s . Would you know that Soweto is the second largest town inAfrica? Only Cairo in far away Egypt is bigger (in terms of population).

The rest of the flight was as uneventful as expected. We safely passedthe skydiver town of Carltonville without a parachute wrapped around ourprop, passed the military airspace of Potchefstroom without sighting aMirage, and cruised at 8500′ over agricultural land and wilderness.

Except some Cirrus high above us there was no cloud. Winter is the idealflying time on the highveld for VFR pilots like us. Perfectly smooth air,hardly any clouds from April to October (we are on the Southern Hemisphere).Although visibility is not always great, due to some low haze, we alwaysenjoy a smooth ride and the sparsely populated landscape below us.

Landing at the Grass Strip

The first time we flew into Lindbergh it took us three quarters of an hourto find the grass strip. And we only found it following roads (we couldalmost read road signs) and having a friendly fellow-pilot on the groundvectoring us in. But this time, we had our handheld GPS on board and quitea few more hours in our logbooks. 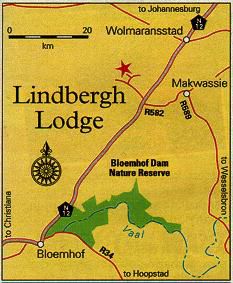 At the last fix we carefully noted the time and checked the DI twice asoften from there on. Sigrid was slowly descending and reached circuit altitudeperfectly on time. Both the clock and the GPS told us we were there, andhere was this green strip amidst other green, yellow and brown fields.Sigrid positioned the Archer on a wide downwind, called for other trafficand got ready for her first non-tarmac landing. Our instructor had toldus, that a good landing is always preceded by a good approach. And thiswas a perfectly flown approach, followed by a greaser. What a pleasureto fly as a team.

The airstrip is in convenient walking distance from the lodge. So weparked our aircraft next to the threshold of runway 03, took that littleluggage we had and walked towards a quiet and relaxing day. Lindbergh Lodgehad expected us. The young lady at the reception showed us around, althoughwe insisted that we had been here before.

While having the first welcome drink I decided that next time I will convinceSigrid to let me fly the first leg and let her get us home. We always flyone leg each. But the one who flies in the morning can enjoy a beer ortwo during the day. And that was exactly what Sigrid did that day. Whilethe three of them had their beers, I pretended that I enjoyed my soft drink. 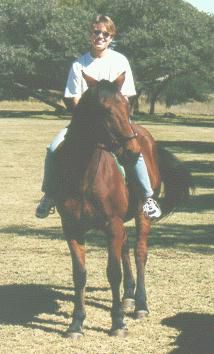 The horses for the two ladies were ready. Stefan and I watched thempreparing for the ride with a smile on our lips. After getting some instructionson where to go and where not, off they went. We were told that there wasno hunting today and the girls were perfectly save.

While the ladies had fun on the horseback Stefan and I decided thatanother drink and some Tennis would be fine. In the meanwhile the sun wasstanding high on the sky and African winter did show its best side. Mercurywas climbing to 25 C and a little breeze came up, ideal for the two ofus.

After a little while the humble waiter from Lindbergh’s own restaurantcame to brief us what to expect for lunch. Today it was cheese soufflé,and we had to promise to be in the restaurant and at the table at 13:00sharp. Otherwise he could not guarantee that we enjoyed the meal. We decidednot to take a chance.

Lunch was great. One would not expect genuine French cuisine in theAfrican wilderness. After enjoying some Chocolate Mousse for desert itwas time to have some rest. The swimming pool area seemed to be the idealplace for this. It offered a great view to the waterhole right in frontof the lodge, where the wildlife comes for refreshment all day. While mycrew and passengers still had some rest, I used the arrival of a noisyGerman bunch of tourists as a welcome excuse to et back to the airstripto get the Archer and myself ready for the flight home. There was stillnot a cloud on the sky and I did not even bother to contact the Johannesburgweatherman.

At 4.00 PM sharp, my team arrived and reluctantly accepted that they wouldnow be taken back to civilisation. There was almost no wind, so I decidedto use runway 03 to avoid the long taxi to the other end of the runway.Although I had 1000 meters of runway ahead of us, I opted for a short-fieldtakeoff. With four people on board, still more than half fuel, 4500′ elevation,and some 25 C air temperature, I did not want to risk anything. Densityaltitude calculations in this part of the wo

And right I was. It took us more than half of the runway to gain a suitabletakeoff speed of 60 knots. And while pulling her off the ground the stallwarning reminded me that the Archer is more comfortable at 65 knots. Withoutthe extra drag from three wheels we quickly picked up some speed and climbedat a cumbersome 200′ per minute to our cruising level of FL 75. Surprisinglyenough, we could immediately get hold of Johannesburg Information and tellthem that we were here. “No reported traffic, squawk two-zero-zero-one…”the nice lady responded.

The late afternoon sun quickly turned red into one of these stunningsunsets we have here almost every winter evening. The Red set fire to Johannesburg’sskyline forming an unforgettable picture. These are the moments where Iregret that I have not yet invested in these fancy cameras, lenses, filtersand all what goes with it.

Grand Central Radio advised us of three aeroplanes being ahead of usin the circuit, of which only one of them I could make out against thedark red background. Why are all these guys coming back from their Sundaytrips just before sunset? Couldn’t they leave a bit earlier? But why shouldwe complain about a 5-mile downwind, after having such a great day.

We have really enjoyed the trip. South Africa’s great winter weather,the tranquility of the wilderness, and the well-managed Lindbergh lodgehave made our day. In two weeks time we will be heading for the KrugerPark.