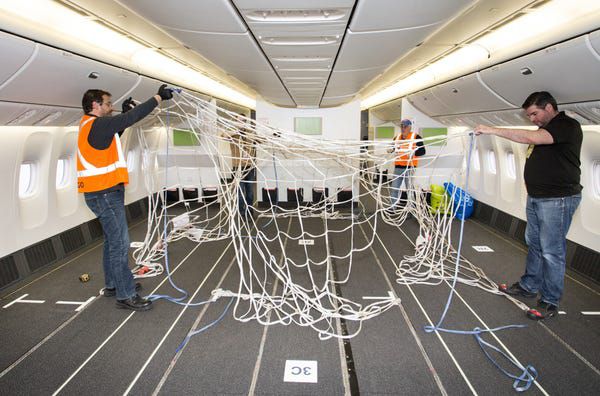 Reminds me of the QC 727’s of the early 70’s. Slide out the seats and slide in containers.

It’s gonna be a while before these airplanes will have paying passengers on board. Instead, keep them flying with paying boxes instead of paying passengers. It could lead to a new shift toward flying cargo rather than passengers for many carriers.

Should be interesting to see how these airplanes will be loaded without cargo doors, without containers, and full interiors sans seats. Should add some interesting load planner duties in figuring out weight and balance issues too.

Hopefully, they paid the Canadian freight crew extra hazardous duty pay for making sure the cargo does not shift, catches fire, deal with Covid-19 issues when arriving China, other overseas destinations, and whatever changing home dynamics upon return. I wonder if the cabin freight crew are subject to flight hours/crew rest regs?

Indeed, necessity is the mother of invention.

Halladay Accident: Should We Bother With The Unreachables?

You touched very briefly on what I believe is the heart of this issue. The more time I spend online, where people can say pretty much whatever they want without having to look you in the eye, the more I realize it’s not a matter of ignorance, poor training, or lack of understanding. It’s a matter of values. Some people believe the thrill is worth the risk.

Aside from defying death in small airplanes, I also ride a motorcycle. States have made progress reducing motorcycle death rates with sensible laws requiring helmets and rider training, but there remains a cadre of hardcore thrill-seekers, egged on to “ride it like you stole it” by idiots memorializing their exploits on YouTube. No amount of discussion about safety can sway opinions in this group.

You can’t have a discussion online regarding safety without at least one commentator questioning your manhood. If you can get past the name-calling and chest-thumping stage to really get in their head, the answer usually comes down to something like this: “Flying is about freedom. It’s about having ultimate control of a machine. It’s inherently dangerous. If you want to do anything INTERESTING and FUN in an airplane it’s usually against the rules. If I can’t do anything dangerous, if I always have to follow the rules, where’s the fun in that? What’s the point of even flying then?”

Unless you can get such people to value their own lives above the thrill, they will never connect the dots.

The “unreachables” is often on my mind as a leader of a flying club, so I’m regularly on the look-out for risky flying behavior by the membership. I recognize that one pilot’s “risky behavior” is another pilot’s “acceptable risk”, so unless it was some egregious event (like intentionally flying into icing or a thunderstorm, or a VFR-only pilot intentionally flying into IMC), one event of what I deem “risky” isn’t something that will get me to say something to that pilot. But a pattern of regularly engaging in “risky” behavior (that is, whatever a prudent pilot would deem to be on the high end of risk-vs-reward) will have me talking to them to at least get their side of things. If in this discussion I find their ADM to be questionable, then it might be time for “the talk” to take place.

The point is, I think the aviation community (and especially flight instructors and leaders of flying clubs/etc.) have a duty to at least try to reach the unreachables. 100% of them will be unreachable if no one ever reaches out to them. Even if we can only effectively reach even 1% of them, that’s still better than 0%.

Poll: Do You Think SpaceX is Ready to Launch Astronauts?