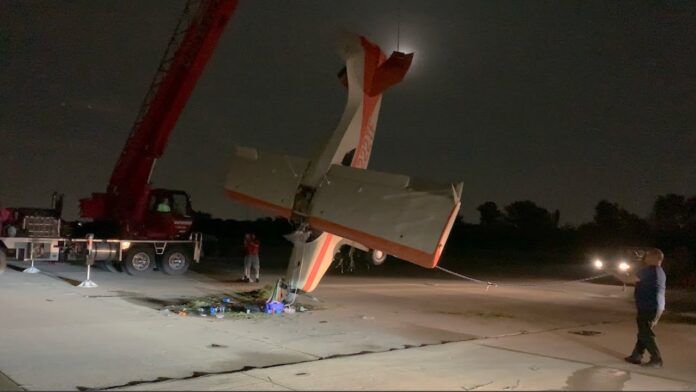 You can tie down an airplane as securely as you want, but Ma Nature has ways of defeating your best efforts. One day a long time ago a local Super Cub, well tied down and facing south (90° to the prevailing winter westerlies), ended up across the road, upside down when a freak gustnado came through from the south. The ropes didn’t break, but the airplane did: pieces of the wing structure were still attached to the (intact) tiedown ropes. And yet, gliders tied down on either side of the Cub survived unscathed.

I’m sorry for your loss.

As a sailor and flyer, I’m often surprised by the thin frayed ropes used for tie-downs. Your typical 2000lb aircraft has a wing that will sustain 6g so a total lift of 12,000lb. Assume each rope carries half of that and you need a rope to sustain at least 6000lb. Assume that knots halve the strength so the actual rope needs to be good for 12,000lb. Add a 50% safety factor for wear and tear and you are looking at a 24,000lb rope. In a good quality polyester rope that gets you to something around 3/4″ diameter.

3/4″ diameter is clearly pretty impractical so we use a long length of 1/4″ Dynema (high-strength yacht rope) looped around four times. The rope breaking load is about 4000lb so for our 1250lb aircraft I’m pretty confident that something on the aircraft will give up before the rope does.

I flew Feeder Caravans for 25+ years and we used large ratchet straps to tie them down without any problem. I landed in, I think, Monroe, LA one night just ahead of a large line of thunderstorms, pulled up to the FBO looking for a tiedown, locked the brakes, chocked the mains and ran inside to see where I could tie down. The gust front hit just about then, darkened the airport and I couldn’t see the aircraft from 100 ft away. When things calmed down the aircraft was still there, undamaged, but there were three aircraft right in front of it that were on their backs in spite of being tied down, the cable system had failed. I ended up having to crawl into the inverted aircraft to turn off an ELT that was blocking the tower, which was on battery power. My aircraft was faced west into the wind and the damaged aircraft, including a Caravan were all tail on to the wind.

I finally convinced the co-owners of our 1961 Cessna to overhaul our 61-year-old prop that had never been off the engine in 4,000+ hours.

The OH shop found a crack in the center bore, which was not visible while on the engine. The crack was in line with a prop bolt and could have cause the prop to fail. So the prop was red tagged and we needed to find a replacement. The OH shop found a used prop, overhauled it and we’re flying again.

In 8 years, we’ll be sending the prop for overhaul, even though it will probably only have 800 hours on it. The $1,200 is well worth the effort to know we have a reliable prop.

Poll: With Avgas Prices Increasing, Have You Considered Using Mogas?

I operate an FBO. We have used and sold auto fuel since it was first legal. We take the following precautions–for aircraft owner protection, as well as our own.

We buy the fuel from a local refinery. Every load has a “birth certificate”–for our protection and the owner/pilot. It lists the minimum octane (most comes out at 94-96) and the Reid Vapor pressure (to eliminate blockages in warm weather–as well as the fuel batch number. All aviation avgas is transported in dedicated trucks that haul nothing BUT aviation fuel. Our fuel system has floating suctions and “dead stop” water detecting filters to prevent water issues–just like our 100 octane.

Years ago, we had a pilot stop through returning from Oshkosh with a BT-13. He was an attorney, and said “I think I got a bad load of gas.” I told him “You picked the wrong people to tell THAT Fairy Tale to–we can account for every drop of gas since we started selling it!” We never heard from him again.

We use it extensively in our own aircraft–and have never had a fuel-related issue. All aircraft have gone to TBO–and beyond. I tell those who may have a concern–“UNLIKE somebody bringing it in from a local gas station, we KNOW what the composition of our fuel is–and how it has been handled. We treat it just like we treat 100 octane–and have no issues.”