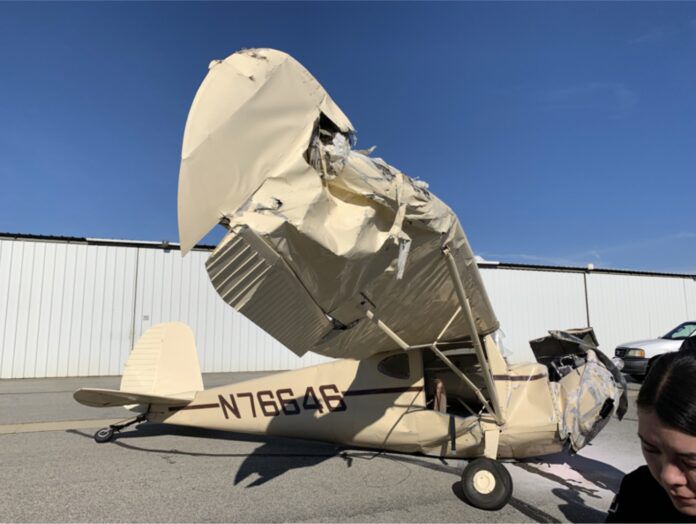 I learned to fly out of Elmendorf AFB in the early 70s, and many of our “sorties” in the 150s were to Fort Richardson’s then towered single airstrip. In fact, that’s where I solo’d. I remember early on my instructor warning me to beware of two things, Beavers on skis and helicopters of any size.

I don’t know where the 3x the rotor diameter thingy came from, but in my view, that’s not enough. In recent years, I’ve been pummeled by the helicopter down wash of a relatively smallish Bell that was hovering a goodly distance from the taxiway, far more than 3x the rotor diameter, as I taxied by. I’ve watched a civilian Huey toss large portable plastic barriers around as he hover-taxied—because one of those barriers nearly hit my tied down airplane, its pilot and I had a relatively pointed discussion after he set down. He had hovered directly over a line of parked aircraft (including mine), all of which were fortunately tied down, without any recognition of the potential for damage he had caused.

A situation similar to the one at Cable involving an ANG Blackhawk and a Cirrus at KFNL a few years ago had the same results—and again a trashed airplane without serious injuries to the pilot. My observation is that helicopter downwash is less predictable than wingtip vortices—and those aren’t nearly as predictable as the FAA would like us to think.

So my personal practice has evolved into avoiding being anywhere near any size helicopter. I’m happy to get out of the pattern, or if I’m taxiing, to hold in place, to avoid being blown around. It’s not worth pushing it.

I flew helicopters for the US Army for over 20 years. It never ceases to amaze me to see helicopters, especially single engine, hovering around at twenty or thirty feet above the ground. When I first learned how to fly, it was in the OH-13 E & G models, admittedly there were some engine reliability problems, but we were taught to hover 2 to 5 feet above the ground. There were reasons for this, 1) develop and maintain precision hovering skills, 2) when the engine craps out, not if, a successful hovering autorotation is far easier from three feet +/- than twenty, and 3) the rotor wash is much less at the lower altitudes (safety for others in the near vicinity). Had that Huey hovered across the runway at three feet, the Cessna 210 “may” have been able to successfully complete his go around. Just another point of view.

Related anecdote–I was flying our King Air, N22WC–and had a passenger ask if he could occupy the vacant right seat. I put the headset on so he could hear the conversation. He was having a good time on the flight–and once up at the flight levels, I took the time to explain the airplane to him–this would be a 3 hour flight.

About half way through the flight, he said “All the controllers seem to know you”–I replied that I flew this route often. “I thought you said your name was Jim.” I replied that I was indeed “Jim”–the passenger got serious and asked “Why do they call you “Charlie”? I replied that “Charlie” was the phonetic pronunciation for “C”.

He replied–“I have to ask–do you have a drinking problem?” I was surprised, and asked why he had asked me. He laughed, and said “I was getting a little nervous–I’m up here all alone with you–the controllers all called you “Whisky Charlie”–I didn’t know if you were a bootlegger, or had a drinking problem!”

Poll: Have High Gas Prices Caused You To Curtail Flying?