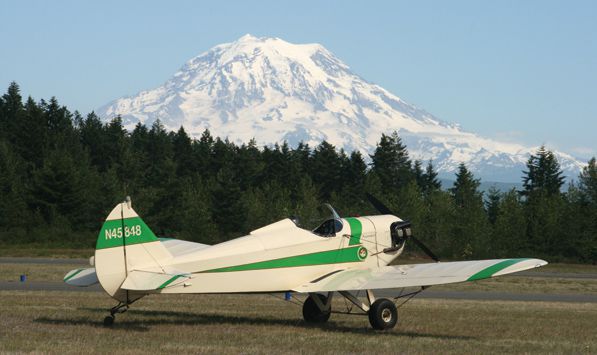 This story originally appeared in our sister publication KITPLANES.

There’s only one thing wrong with “homebuilt” (Experimental/Amateur-Built) aircraft: They take so gosh-darn long to build. But a lot of people have found the ultimate “quickbuild” alternative: They buy homebuilts that are already flying. No rivets to pound, no burned clothing from welding sparks, no sniffles and hives from working with airplane glue. They deal and dicker over an aircraft that can be demonstrated in flight, avoiding the high-risk first flight of an amateur-built airplane that may still have some bugs in it.

Buying used homebuilts is pretty common. About 1500 amateur-built aircraft changed hands in 2009-almost 5% of the entire fleet. In comparison, only about 1000 new homebuilts were added that year. So, for every two builders making the first flight of their newly completed steed, three folks take a first flight in a flying homebuilt they bought.

The first problem is determining how many of the approximately 2,100 homebuilts in my accident database were being flown by other than the plane’s original builder. I took three steps to attempt to establish the status of each accident aircraft.

If the NTSB report didn’t provide the answer, the owner’s name was then compared to the official manufacturer of the aircraft. It’s a common (but not universal) practice to list the builder’s name as the manufacturer. If the manufacturer’s name matched the pilot’s name, I counted it as a builder-flown aircraft. The listings were also examined for other correlations. For instance, if the manufacturer was EJK Associates and the plane was owned by Ezekiel Jeremiah Kelly, it was likely still owned by the builder.

Where no matching names were found, the aircraft was tentatively listed as purchased. Each was checked manually to detect any extenuating circumstances such as the listing of the kit maker’s or designer’s name, or a corporation or joke name as the manufacturer.

The process isn’t perfect, but it’s probably pretty close. The number of accidents in builder-flown versus purchaser-flown aircraft came out roughly equal. Out of about 2,110 accidents, some 1,050 met my criteria for builder-flown, and about 880 met the non-builder-flown criteria.

When someone buys a completed homebuilt aircraft, especially one that has completed its Phase I flight-test period, they might expect that the mechanical issues have been ironed out. The statistics bear that out. Because the totals of each type are so close, I compared the actual number of accidents instead of the percentage of accidents. Figure 1 shows the number of accidents due to mechanical causes for builder-flown and purchaser-flown homebuilts over the 10-year period covered by my database. Note how the builder-flown aircraft suffered twice as many accidents due to both builder error and engine mechanical issues. Obviously, if there are fundamental problems in construction, those who make the early flights stand a greater risk of encountering mechanical issues.

As ever, the primary cause of accidents was pilot error. I break this category into two sub-categories: pilot miscontrol, which covers deficiencies in basic stick-and-rudder skills (overshoots, undershoots, ground loops, stall/spin, etc.), and risk judgment to encompass accidents where the ship came to grief due to pilot decision-making (fuel exhaustion, buzzing, etc.)

The results are a bit more interesting in the risk-judgment category, where the purchased homebuilts are almost 50% higher. Figure 3 breaks out this category (again, with the number of accidents instead of percentages). Note the difference in fuel-exhaustion rates. This implies that purchasers are trusting fuel gauges more than they should, or that the builder attains a better understanding of his airplane’s fuel burn rate during the test process.

The difference in the “Maneuvering at Low Altitude” category is even more compelling. Twenty more purchaser-flown aircraft came to grief than builder-flown examples. With the slightly lower total number of purchaser-flown aircraft, the accident rate is about double that of builder-flown. One cannot help but speculate that builders who spend years in construction are a bit more cautious than someone who may have bought a flying plane on impulse.

Feeling pretty good about the safety record of purchased homebuilts? Take a look at Figure 4. It’s at once eye-opening and a bit frightening. It shows the percentage of total accidents versus the pilot’s time in type. Note the relative number of accidents that occur in the pilot’s first 10 hours. Even though builders are more likely to encounter mechanical issues in their first 10 hours of flight, the statistics show that they’re less likely to have an accident than someone who purchased a completed, flying, tested homebuilt. The inescapable conclusion: Builders do a much better job of preparing themselves to fly the new aircraft they built.

What’s happening? My guess is that the flying characteristics are catching the new owners unawares. Homebuilts are not required to meet federal standards-it says so, right on the warning placard we install. A newly purchased homebuilt isn’t going to react to control movement like the typical Cessna or Piper the buyer may be used to. Most people think, “Well, sure, the homebuilt’s going to be lighter on the controls,” but there’s more to it than that. A homebuilt may exhibit adverse yaw, provide different control-force response to G loading, lack stability in one or more axes, or have one of dozens of subtle differences from type-certificated aircraft.

Don’t these same aspects affect builders? Of course. But builders have years to contemplate the first flight, and many are networked with builders and owners of the same model of plane. Facing the first flight of a brand new, untried aircraft may also make them focus more on preparation.

A Lesson to Be Learned

Previously, I mentioned my involvement in an FAA Amateur-Built Aircraft Flight Safety Board (AB-FSB) during 2010. The FAA was quite aware of the accident statistics related to pilots purchasing completed homebuilts. In fact, several members of the board were pushing for a policy change that would have placed all newly purchased homebuilts back into their Phase I flight restrictions (i.e., no passengers) for the first 10 to 20 flight hours.

A detailed examination of statistics helped stave off the change. Yes, the accident rate was higher for newly purchased homebuilts, but the number of cases where a passenger was killed was relatively low (just four cases in 10 years). The benefit of the proposed policy change would have been minor at best, and it was not included in the recommendations of the board.

We can wipe our brows in relief, but the fundamental problem is still there. Recent purchasers of amateur-built aircraft do suffer a higher accident rate. The fact that the aircraft builders have a lower accident rate despite the teething difficulties of newly completed aircraft clearly indicates that this is a training/checkout issue.

The lesson is clear: Buyers of completed homebuilts need to better prepare for flying their new aircraft. Figure 5 shows the overall transition advice developed by the AB-FSB. This diagram was included in a draft Advisory Circular (“Airmen Transition to Experimental or Unfamiliar Airplanes”), which contains specific training recommendations for pilots of Experimental aircraft. The new AC should be released toward the end of 2011. I am proud to have been a member of the board, and to have written several portions of the document.

The new AC should help homebuilt buyers reduce the risks of learning to fly their new purchases. But the fundamental advice from the AC should be apparent to everyone: “Pilots transitioning to Experimental or other unfamiliar airplanes need to develop a training strategy for mitigating the risks of operation of the new airplane.”

A Brief Review of Accident Reports

The accident flight was the pilot’s first flight in the airplane, which he recently purchased. The pilot took off and circled the airport once, performing a go-around on his first approach. While on the downwind leg the second time, the engine sputtered and quit. The pilot established a glide and turned toward the runway, but the airplane impacted a berm about 75 feet short. The main fuel tank in the accident airplane was not equipped with a “flapper valve” standardized on later model Glasairs. There was a warning notice in the builder manual that stated: “Do not land or take off with less than 10 gallons of fuel in the main fuel tank.” The notice was not in the pilot’s flight manual, and the new owner “overlooked” it prior to the accident flight. The pilot estimated that he had 8 to 10 gallons of fuel on the airplane when the engine lost all power. NTSB Probable Cause: “The pilot’s failure to follow published procedures, which resulted in fuel starvation during approach.” Tailwheel Transition

The accident flight was the pilot’s first flight in the Sonerai, as well as his first flight in a tailwheel-equipped airplane. After several taxi runs by the pilot to establish the airplane’s ground-handling characteristics and to familiarize himself with the “visual perspective,” a takeoff was initiated. The pilot stated the elevator trim was excessively nose high. Once the aircraft was 5 to 10 feet above the ground, all visual relationship with the runway was lost due to the aircraft’s limited visibility. The airplane ascended to about 20 feet, then stalled and impacted the ground. A review of the pilot’s logbook revealed 90 hours of total flight experience, all in tricycle-gear aircraft. NTSB Probable Cause: “The pilot’s premature rotation and failure to obtain/maintain airspeed during the takeoff, which resulted in a stall and impact with the ground. Factors in this accident were the pilot’s lack of total experience in tailwheeled aircraft and the nose-high elevator trim setting.” Low Over Water

The airplane had been flying around the area at low level for about 45 minutes when it struck power lines about 70 feet above a lake, and then fell into the water. There were no reported obstructions due to weather, and the reported visibility at about the time of the accident was 10 statute miles. The pilot claimed no recollection of the accident or the events leading to it. NTSB Probable Cause: “The pilot-in-command’s decision to fly at a low altitude and his improper visual lookout resulting in an in-flight collision with static wires.” Check That Signature

The pilot had just purchased the airplane and was flying it to his home base. In cruise flight at 3500 feet, the pilot experienced erratic power. After readjusting the mixture to a full rich setting and applying full carburetor heat, the engine speed recovered to 2400 rpm for a short time before decreasing again to approximately 800 rpm without any inputs to the throttle, mixture or carburetor heat controls. After the second decrease in engine rpm, the pilot decided to make a precautionary landing. During the approach to a field, the airplane’s propeller struck a power line. After touchdown, the airplane continued approximately 300 to 400 feet before it struck a fence and several trees. Investigators obtained a fuel sample from the fuel strainer drain, which revealed large amounts of scale-type debris. Upon removing the fuel strainer bowl, “extreme amounts of scale-type debris of a rust and dirt nature were discovered.” The FAA inspector reported, “We pulled the fuel strainer and it looked like someone dumped their coffee grounds in there.” The last condition inspection of the aircraft was recorded as being performed two months previously. The logbook indicated that an FAA certificated airframe and powerplant (A&P) mechanic had performed the inspection. However, in a subsequent written statement, the inspector stated: “[The previous owner] stated he performed the annual condition inspection but forged [an A&P mechanic’s] signature because he does not possess a Repairman Certificate or an Airframe and Powerplant Certificate authorizing him to approve the aircraft for return to service.” NTSB Probable Cause: “A blocked fuel strainer due to an inadequate maintenance inspection by the previous owner, which resulted in fuel starvation.”