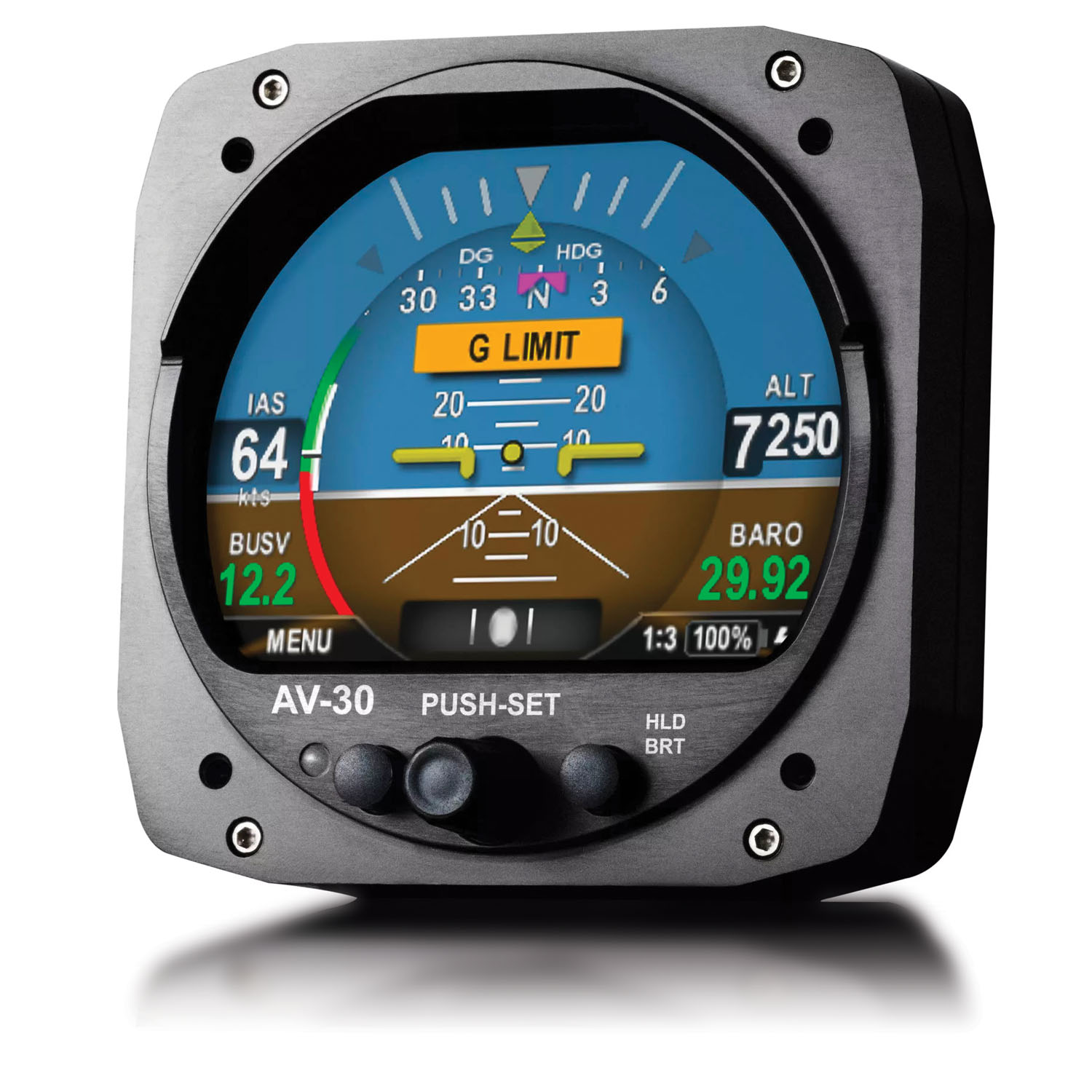 Despite appearances, and what you might logically conclude, the uAvionix AV-30-E (E for Experimental) is not intended to be a head-on competitor for the Garmin G5. Even though you might assume differently from the basic feature sets and price point, the companies have come at developing a small EFIS to be used as a primary instrument—or to back up other instruments—from different angles. True, they both have bright, full-color screens and both fit into 3-1/8-inch instrument holes, but there are significant differences. Not the least of which is that the AV-30 fits in behind the panel and the G5 is intended to go over the top. (Since this review was written, uAvionix has received approval for certified installations.)

Moreover, the AV-30 is intended to be a standalone product but not explicitly part of a particular ecosystem. Garmin’s G5, on the other hand, is designed to slot into a G3X Touch system and act as an integral component, though it can also live on its own. These differences have consequences that trickle down to the ways in which the devices connect to external data sources and the capabilities they offer.

The Experimental-class AV-30 has a full built-in sensor array (attitude and pitot/static) to display aircraft attitude, altitude and airspeed. From there, it calculates and displays vertical speed, true airspeed—as well as G loads, a vertical velocity trend (roughly analogous to a VSI) and AOA. As on the AV-20, the -30 uses a synthesis of airspeed and pitch attitude to calculate an AOA. You set the upper and lower limits based on observed stall AOA and cruise AOA; the AV-30 does the rest.

The AV-30 can also display aircraft heading but does so with what amounts to a digital DG. Set the aircraft heading to your compass and the AV-30 will keep track of heading as you fly, though it’s not a slaved system and there is no internal or external magnetometer available at this time. (Lucky you, you get to keep your whiskey compass!) The AV-30 can, however, be connected to a wide range of GPS position sources through an RS-232 input, and with that will display ground track, lateral deviation and GPS waypoints on an expanded HSI. This feature centers on  basic course guidance, since there is no internal database to provide map data.

In fact, the AV-30 has two RS-232 data channels, one dedicated to the tailBeaconX and the other to external nav sources. It also has a direct connection to an OAT probe without an external signal conditioner, which the Garmin G5 requires. (With the OAT probe, the AV-30 calculates and displays true airspeed and density altitude.) The AV-30 does not, however, have a way to connect to nav sources providing vertical guidance, and does not have the ability to decode ARINC 429 data feeds, which is what all modern IFR-approach-approved GPSes require. Garmin’s G5 does, but requires external boxes to add this function. (And, it should be said, the G5 is designed to string additional functions through its CAN bus networking, where the AV-30 is currently built for point-to-point connections.)

My review of the AV-20 revealed the difficulty of controlling a complex instrument with just three buttons. But with a rotary encoder—OK, I’ll just call it a knob—the AV-30 becomes much easier to control. The main knob’s function is contextual, of course. In the typical setup, where the attitude indicator is your primary view, the knob adjusts the pitch reference line by default. Pushing it opens a small window at the bottom center—and the slip-skid ball does a little shuffle up and out of the way, still remaining visible—to reveal that function. Setting barometric pressure is the first on the list. One push, then turn, and you’re adjusting the altimeter setting. Push again, without turning, and you’ll typically see the DG setting, then heading bug and then, if you have the altitude reminder enabled, the altitude bug. Again, the menus are contextual and won’t appear if the related feature is turned off or not available on that display. Nice.

Two small buttons flank the center knob. Typically, the left is labeled MENU while the right, while labeled HLD BRT, actually scrolls through the four available pages for each display, attitude indicator and DG/HSI. The first three are fully configurable, allowing you to choose the data seen in each field around the periphery of the display. The fourth page is the primary attitude indicator and, when there’s a tailBeaconX—the company’s super compact Mode S transponder/tail light—it becomes the control screen for the transponder. In this case, the center knob controls the squawk code and transponder mode. Push the button to start setting a squawk, push again to highlight the first digit, twist for the number you want, push to accept, rotate to the next digit…and so on. It’s a scheme more push/turn intensive than your old-fashioned four-knob transponder, but it’s a huge improvement over the AV-20’s implementation. When not in a “set” mode, the left button controls the IDENT function. If you’ve pushed the knob once to start the setting process, the right button becomes the mode selector—ON, OFF, ALT—and if you should push the knob twice without turning, the right button shows VFR, which gives you a quick way to set a squawk code of 1200. It all sounds more complicated in the telling than it proves to be in use.

Most builders will purchase the AV-30 to be the primary attitude indicator or to replace old vacuum-driven gyros. Here, it’s a winner. The display is bright and crisp, and it faithfully reacts to the aircraft’s movements while nicely balancing responsiveness to accuracy. It shows what the airplane is actually doing in a clear way and, in case you’re curious, the unit I tested had no tendency to drift off indicated bank angle during long-period continuous turns. My sole complaint, and it’s a small one, is that the slip-skid ball is quite sensitive. Either that or the Garmin G5’s is overly damped, but I did find myself initially chasing the ball when flying primarily on the AV-30; in time, I learned to just let it waggle.

A key feature of the AV-30 is the internal DG, which would allow you to replace both the attitude indicator and directional gyro in a vacuum airplane. Overall it worked well, remaining accurate for 20-30 minutes at a time. uAvionix says a software update readied since my unit was built improves that performance. And while this unit didn’t prove as steady as a system with a magnetometer, which constantly corrects itself, it’s worlds ahead of your typical vacuum gyro. Remember how bad those could be? One possibly important distinction here: The AV-30 does not have a dedicated rate-of-turn indicator, which would be an issue for Experimentals whose operating limitations say they can fly IFR as long as they’re equipped in accordance with FAR 91.205; that FAR explicitly requires a rate-of-turn indicator. In this case, you’d need to keep your old turn coordinator alive to be strictly legal, while the other instrument-hole EFISes we’re familiar with do include the rate-of-turn feature.

The DG can be overlaid with an HSI presentation that also includes a basic route “magenta line.” I was able to get a Garmin aera 760 to drive the AV-30—though, for quality of images, the accompanying photos are using the internal demo mode. You can choose whether to show the DG heading presentation or allow the unit to display GPS ground track. Finally, as I found on the AV-20 tested previously, the calculated AOA display was surprisingly good and useful. The display can be nestled next to the airspeed tape for a really quick, at-a-glance check on both speed and AOA without beating up your surely rusty instrument scan.

What the Future Holds

For now, the number of inputs is relatively limited, but uAvionix is working toward several new features. For one, it continues work on an adapter to allow the AV-30 to drive older autopilots with a heading-bug signal. Beyond that, they’re working on a module that attaches to the back of the unit that would connect external Bluetooth devices. That means sharing the attitude/baro information to an external display like a tablet running ForeFlight, as an example. What’s more, while the AV-30 would be able to “pass through” external GPS data on this Bluetooth channel, it can also query the GPS built into the tailBeaconX and share that info with the tablet. This configuration would make the AV-30 the digital hub of information. All you would be missing is ADS-B In data (traffic and weather) since the tailBeaconX is a Mode S transponder, not a bidirectional ADS-B transceiver.

At the AV-30’s price point, it’s a very good value. For $1595, you get the instrument including an internal battery good for 2 hours. Adding the tailBeaconX costs $2199 (with a $300 discount for bundling with the AV-30) and gets you a Mode S/ADS-B-compliant transponder controlled through the instrument. To add OAT functions is matter of buying the recommended Davtron probe for about $90, which is about $200 cheaper than adding OAT to a standalone G5. What you won’t get is an instrument that can stand in for a CDI or an HSI that can portray information from an IFR GPS or a VHF nav radio. This may or may not be important to you.

The AV-30 is an excellent base for uAvionix to build upon with features and capabilities in the future. We know the company isn’t afraid to think unconventionally, so it’ll be interesting to see where this device goes.

Photos: Marc Cook and courtesy of the manufacturer.