NightFlyer was always one of my best students. We called Joe (not the same Joe I was flying with when we had the pitot static system failure) "NightFlyer" because he worked as a carpenter all day and usually came out in the evenings to fly. At any rate, he kept me on my toes and made me a lot better instructor because I had to work so hard to keep ahead of him and keep him challenged.

One Saturday afternoon Joe was on the schedule for a rare daytime flight and scheduled with me for an instrument competency check. He did this regularly and he was usually more than competent so it was always a challenge for me to find a challenge for him. I decided that this time we would conduct the whole flight partial panel. Of course, I didn’t alert Joe to this before takeoff. He would just have told me that if he knew he was going to have a vacuum failure actual IFR, he wouldn’t take off. And he would have been right, so I just kept this little tidbit of information to myself.

As we climbed through 400 AGL, I slapped the hood down on Joe’s head and slapped pasties on the attitude indicator and heading indicator. Joe began complaining mightily. I told him to continue. This went on for the whole time we were airborne and for most of the taxi back to the tie down and postflight. "After all," I told him, "you are paying me to make sure you are proficient and current and ready for any eventuality. I am just doing my job." Joe muttered something about perfectionists and we went out for a postflight drink.

Several days later NightFlyer booked a Cherokee for a cross-country flight and, although the weather was Chicago’s typical 800 and 1, he decided to go — after all, the tops were low and the freezing level high and Joe was competent on the gauges. About a half hour after he left, I noticed Joe taxiing back to the tie-down area. I went back to the student I was with and we continued to discuss his cross-country planning until Joe burst in the door and rushed over to give me a big hug. Well, I’ve had students greet me in various ways, but this was not the usual so I asked Joe what was up. He told me that just as he had climbed into the clouds the vacuum pump failed and the attitude indicator had rolled over and died. At which point he immediately thought of all the partial panel work we had recently done. He felt totally prepared for the emergency and swore he would never complain about my being hard on him again! (I rather suspect that since Joe is now an instructor that a fair measure of his students receive partial panel checks. And by the way, his vow never to complain again was soon broken.)

Many Ways to Fail

Why All Those Moving Parts…?

It is all Jimmy Doolittle’s fault! Most of America knows General James Doolittle because of his raid on Tokyo in the Mitchell Bombers, but as pilots, we stare at his legacy every time we get in the cockpit. (Well, at least most of us do.) On September 24, 1929, he proved that it was possible to fly solely by reference to instruments using a Sperry gyro-horizon and a directional gyro. Since then, we’ve been using gyro-stabilized instruments to keep the shiny side up. (Okay, some of the fancy heavy iron out there use laser-ring "gyros" with no moving parts, but, for the most part, those have not filtered down to the GA fleet yet.)

Gyroscopic flight instruments work on the principle of gyroscopic rigidity in space. A gyroscope will tend to remain in its original orientation in space and will resist attempts to change its position. In fact, the gyros remain rigid in space and the airplane rotates around them. Since typical gyros spin from 8,000 to 18,000 RPM there is the potential for a lot of wear on bearings. Without going into the detailed workings of each of the gyros (I want you to be able to successfully deal with their in-flight failure, not rebuild them) there is a high risk of failure with such fast-moving parts.

Aside from a vacuum pump failure, the most common ways you will see problems with your vacuum system and/or gyro instruments are the all-too-common directional gyro that precesses excessively or the attitude indicator that shows a constant slight bank when the wings are actually level. Those failures are not a serious problem when you can see out the window, but in the clouds, the least they do is add tremendously to the workload.

…I Really Can’t Take All The Credit

Although Joe was grateful for the training he received, the kudos go to him for properly and promptly recognizing the problem and then dealing with it before it put him into a life-threatening situation. Vacuum system failures are not the cause of aircraft accidents. Non-recognition of the problem is the major cause of the accidents. On the other hand, perhaps the pilot recognizes that a problem exists but misdiagnoses the true nature of the malfunction.

The training that Joe received was good … as far as it went, but let’s face it, no pilot in recorded history has crashed because someone reached over and covered one of the flight instruments! At that point, the hard part is over, the diagnosis is made, and the only job left is keeping the shiny side up and the pointy end forward until a landing can be made. Now, don’t get me wrong, we all need practice in flying on partial panel instrumentation, but additional training and practice is needed to get to that point successfully.

What’s In A Scan?

Recent accidents have been blamed on vacuum or gyro system failure, but it can’t be that all those pilots were incapable of flying partial panel. When you come right down to it, it’s not that difficult — after all, there are fewer instruments to scan! So, what’s happening to all these folks? 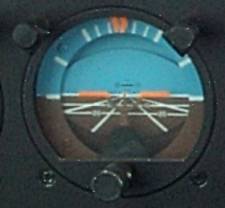 Our instrument scan is something we tend not to give much thought to once it is mastered, but let’s take a closer look at what we are actually doing during the scan. It’s impossible to quickly interpret the readings of all the gauges. What we’re really doing is trying to identify the gauge or gauges that are not showing what we want to see. If you’re aim is to maintain an altitude of 4,000 feet, the only time you should take conscious notice of the altimeter is when it reads something other than 4,000. If you’re maintaining a heading of 120 then the only time the heading indicator should capture your attention is when is say something other than 120. And that’s when the problems begin.

If the heading indicator is drifting off our desired 120 heading, what’s wrong? Are we simply rusty on the gauges and unable to accurately hold a heading? Or has the heading indicator failed? Or, is it the attitude indicator? Or perhaps the whole vacuum system has gone south. If the correct answer is not determined quickly, the success of the outcome will be seriously in doubt. Quick diagnosis is the key.

How To Decide What Quit…

So how do we decide what the problem is while the airplane is still right-side up and level? Remember your instrument instructor’s warning against fixating on any one instrument? When your scan picks out an instrument you think is wrong, the urge is to stare at that gauge and try to fix its problem. Truth is, the gauge that does not match the rest of your instruments may not be the problem. If your heading is drifting, it may be a bad heading indicator, or it may be the fault of an attitude indicator that is either at a perpetual bank in level flight or in the process of failing — or it may be a failure of the vacuum system itself. How do you decide?

Check the other instruments. If the attitude indicator shows wings level, what does the turn coordinator show? What does the compass show? Verify the readings on your vacuum instruments against each other and against the pitot/static instruments and the compass. Make very small changes and only make one change at a time and verify that the anticipated reaction shows up on the instruments. Once you determine the bad guy, get it out of your scan. I carry instrument covers in my flight kit all the time. Folks have kidded me that I’m the complete flight instructor — ready to inflict partial panel on an unsuspecting student at any time. Not the truth. I carry the covers so I can cover a failed instrument and get it out of my scan. Remember, your eyes will be drawn repeatedly to a failed instrument and this will destroy your scan. Eliminate it and the distraction it causes.

…What Training Is Needed? 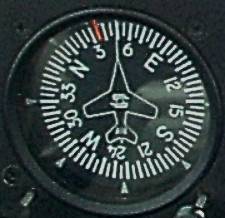 How can we train to quickly recognize and recover from instrument and/or vacuum system failures? Unfortunately, the training required is not readily available to many pilots and it doesn’t take place in an airplane. Partial-panel training is good and valuable and should be practiced by everyone periodically, but it only addresses how to keep the airplane upright once a problem is diagnosed. Unfortunately, when the instructor reaches over and covers an instrument, that takes care of the diagnosis part of the exercise.

What’s necessary is training to diagnose an attitude indicator that’s slowly winding down or a heading indicator that is precessing abnormally. That kind of training requires a flight-training device. (The generic word used is simulator, but a simulator is a device that accurately represents a particular make and model of aircraft.) Your first session in a training device with the ability to simulate various instrument system malfunctions will be a revelation. Most pilots I have observed undergoing this type of training have lost control of the aircraft at least once before the situation was properly diagnosed and dealt with. Once you undergo this type training yourself you will have adequate motivation to maintain currency in these vital skills.

So what’s a pilot to do? Obviously, getting some "simulator" training is the best course of action. If that kind of training is not readily available to you, there are some things you can do until you can manage to get the training. (I don’t consider this a choice. If you intend to fly in the clouds with any regularity, you NEED this training. It’s not a "nice to have" situation — it’s a life and death necessity.)

Some Do’s and Don’ts

We have to change the way we train instrument pilots and PCATDs may be an answer to the problem. Any system that will allow instructors to introduce subtle instrument failures will be an improvement. As the regs stand now, up to 10 hours in a PCATD may be credited toward an instrument rating. The regs should also require that all time spent in a PCATD or other training device should be spent simulating those failures that cannot be demonstrated in an aircraft in flight. Until that time, don’t put off practicing your own "what if" scenarios. If you thoroughly think through all possible failures ahead of time, you’ll be in a far better position to recognize and deal with them when the time comes.