Every student pilot has heard the admonition to "keep your eyes outside." When we’re flying VFR, we’re told, at least 70 percent of our time should be spent looking outside the airplane. One of my instructors once referred to me as "human TCAS," and I’m still proud of my ability to spot traffic and otherwise ensure plenty of separation from those with whom I share the skies. Apart from a couple of interesting pattern maneuvers with NORDO pilots who obviously hadn’t checked the windsock, I hadn’t ever gotten very close to an airplane in flight, and I thought I liked it that way.

I didn’t know what I was missing.

The Art Of Formation Flying

Turns out there are a lot of folks out there who quite enjoy getting up close and personal with other airplanes. Formation flying demands an exceptionally high level of pilot skill; it’s demanding, disciplined, rewarding, and a lot of fun … come to think of it, it’s all about why many of us learned to fly in the first place.

If you want to fly formation, you must first adhere to the FARs and do so "by arrangement with the pilot in command of each aircraft in the formation" (FAR 91.111 (b)). You should also have excellent stick-and-rudder skills, a high level of flight discipline, and the ability to place trust in your leader. Specific training from an experienced instructor is highly recommended (more on that later). And when you and your team attain sufficient grace that you want to share your skill with an air show audience, you must be evaluated and approved by Formation Flying Inc. (FFI), the FAA-sanctioned issuer of non-aerobatic, non-warbird formation-flying credentials.

FFI’s story begins in 1997, when the FAA began requiring local Flight Standards District Offices to include, in their air show approvals, a stipulation that anyone participating in non-aerobatic formation flight during an air show possess a training and evaluation credential acceptable to the FAA. The Formation and Safety Team (FAST), an organization of warbird groups, had developed FAA-approved credentials, but FAST was recognized by the FAA as a warbird-only organization. The International Council of Air Shows (ICAS), which still issues aerobatic formation cards, terminated the issuance of non-aerobatic cards in 1998 as not appropriate to their core mission. Suddenly, a large and diverse group of competent formation flyers was left without an agency to issue air show credentials.

And that left a man named Stu McCurdy who, in the best tradition of grassroots general-aviation flying, saw a problem, rolled up his sleeves, and went to work. A retired U.S. Air Force Colonel with over 30 years of formation-flying experience in T-38s, F-4s and other aircraft, Stu is an RV-3 owner and is currently building an RV-8. If you were at EAA Airventure Oshkosh in 1997, you may have seen him lead the 25-ship formation flight for Van’s Aircraft’s 25th anniversary.

Working closely with the FAA, FAST and other organizations, Stu founded FFI and developed a comprehensive evaluation guide, the FFI Formation Standards and Proficiency Program. Patterned after the well-proven, FAA-approved FAST program, FFI’s program also has much in common with the Practical Test Standards we all know and love: It clearly delineates areas of required knowledge and competency for formation flyers, and spells out precisely what constitutes qualified and unqualified performance. On April 21, 1999, the FAA approved FFI as the issuer of non-aerobatic, non-warbird formation-flying credentials. Its stated mission is "to provide standards for formation training and flying, a system for proficiency evaluation, and a method for monitoring currency." 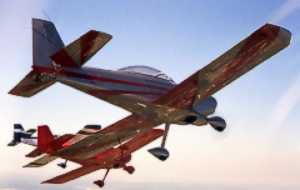 I was privileged to observe FFI’s work firsthand, thanks to my friend Bill Gunn, the training director of the Texas DOT Aviation Division and an accomplished pilot and RV-4 owner. Four other pilots — who, like Bill, were being evaluated as wingmen for an FFI formation-flying card — joined me on a clear, calm morning at Georgetown, Texas (GTU), to put their skills to the test.

Minimum qualifications for an FFI-approved wingman include a Private Pilot certificate, 100 hours total time, 20 hours formation time, a current medical and EAA membership, ten flights in a four-ship formation, recommendation by a flight lead or check pilot … and passing the FFI check ride. Naturally, standards for flight leads are more extensive. Your FFI credential can be reissued annually provided you maintain and document your currency: Wingmen, for instance, must fly in a four-ship formation at least four times yearly.

First up was a thorough, hour-long preflight briefing. Stu, acting as both check pilot and lead on this particular flight, briefed the team on every aspect of the flight, from engine start to shutdown. Wingmen are evaluated on eleven discrete areas of operation, flight leads on nine. Formation flyers are expected to possess and demonstrate an understanding of the mechanics and safety of every operation they might encounter, including hand and aircraft signals, ground and radio operations, takeoffs, energy management, multiple formations, configuration changes, landing procedures, and emergency operations.

Satisfied that we were prepared for the flight, Stu released us to the flight line, and I climbed in to the back seat of Bill’s RV-4. It was a beautiful day to fly. "Some people think this is really dangerous," Bill told me. "They say, ‘I’d never do that in an airplane!’ But you do it every day driving down the highway." 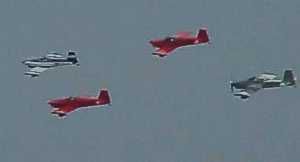 We took off in two-by-two formation and headed out to the practice area, where Stu put us through the paces. We climbed, turned and descended in fingertip, echelon, trail, and route formations, executing cross-unders, pitchouts and rejoins. Breaking to an extended-trail formation, Bill let me take the ship briefly, explaining that my task was to hold my position relative to the aircraft beside me by keeping an element of its airframe (an aileron hinge, for example) in precisely the same place in my visual field. Flight leads, always experienced wingmen themselves, handle all navigation, communications, and traffic scanning; they also plan and execute all maneuvers so as to make things easy on their wingmen. Wingmen, well … we look at aileron hinges.

It’s an entirely different way to fly, I realized quickly; it is exceptionally precise, and one in which trust in your partners is paramount. (Of course good wingmen, like Bill, take the airplane back after a few minutes of this!) After a few more maneuvers we decided to have a little fun, and conducted barrel rolls and loops in extended trail, and a formation flyby over a nearby airport; finally we descended to our home base. After a solid debriefing, including a critique of performance and lessons learned, the members of the team became the proud recipients of FFI’s formation-flying cards. 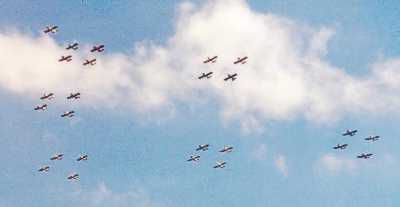 Formation flying is a challenging and rewarding addition to a pilot’s repertoire, provided that it is conducted with a hearty dose of flight discipline and a respect for safety. In other words: Kids, don’t try this at home without appropriate training and preparation. Though the FARs are fairly quiet on the issue of formation flight, NTSB accident reports are considerably more vocal, particularly where impromptu formations are concerned. In one of the more highly publicized incidents, a Piper Aerostar and a Bell 412 collided as the helicopter maneuvered underneath the airplane to check a reported landing-gear malfunction. After making a low pass by the tower (who reported the plane’s gear as extended), the Aerostar pilot accepted the Bell pilot’s offer to join up for a closer look. The Bell converged from the left rear, intending to pass under and to the right of the Aerostar; moments later the aircraft collided and crashed to the ground. The NTSB report notes that "none of the pilots had training for flight in close proximity to another aircraft."

What’s Involved In That Training? 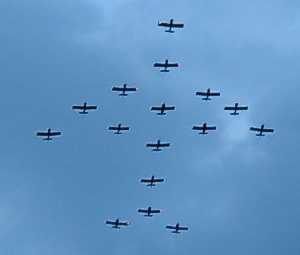 First, you should be very current in and confident of your stick-and-rudder skills. (While the Practical Test Standards for the Private Pilot certificate allow 100 feet of altitude here and there, being 30 feet from another airplane is not the time to take those liberties!) As Stu told me, "a pilot should have the feeling he is strapping on his air machine to go fly, not climbing in to go for a ride." Next, there’s ground school — there are plenty of new terms and procedures to learn in formation flight. FFI incorporates such resources as the T-34 Association’s "Formation Flight Manual," Darton’s video "Formation Flying, The Art," and FAST training materials. FFI, while not a training organization itself, can provide suggestions on resources to get you started, and probably put you in touch with an experienced instructor.

Find an experienced formation instructor or clinic and practice, practice, practice. The new formation wingman, working with a trusted and experienced flight lead, starts out wide, perhaps a wingspan or two out, and works at developing smooth control response. When any tendency to over-control is gone, the pilot gradually moves in closer and actually "begins to work as an extension of the flight lead’s wing," Stu told me. As proficiency increases, the type and complexity of formation maneuvers will gradually increase. Stu concluded, "the pilot should always remember that for the period he is flying formation on the wing, he gives total trust and dedication to the leader. If he doesn’t trust the leader, he should not be in the formation."

See You At The Air Show!

In addition to conducting evaluations for formation pilots, Stu also travels throughout the country, performing with FFI card-holders at events like EAA Airventure Oshkosh, Sun ‘N Fun, Van’s Aircraft Homecoming Fly-ins, the Texas Independence Day Capital Flyover, and scores of regional air shows. He’s also building a database of formation-flying groups in the U.S., and requests that all formation groups contact him via email with your names, addresses, telephone numbers, email addresses, name of the formation, number and types of aircraft, and a summary of formation experience. You can also send snail mail to:

After my experience, I can only enthusiastically recommend formation flying as a fun and challenging way to enhance your skills as a pilot. And when you and your team decide to share your talents with an air show audience, drop Stu a line and set up your FFI check ride. I’ll be down on the flight line watching, wishing I was up there with you!