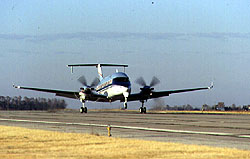 A mechanic and his supervisors have been cleared of any wrongdoing over maladjusted elevator cables suspected of playing a role in the crash of a US Airways Express Beech 1900 on Jan. 8, 2003. All 21 people aboard the commuter flight, operated for the airline by Air Midwest, died when it climbed sharply after takeoff, stalled and crashed into a hangar at Charlotte Airport. According to The Charlotte Observer, the FAA has sent letters to mechanic Brian Zias; George States, a mechanic who inspected Zias’ work; and Richard Tucker, foreman of the Huntington, W.Va., shop where the work was done, telling them they “may consider the matter closed.” But the paper also quotes unnamed sources as saying the letters don’t necessarily indicate the maintenance was done correctly. Two days before the crash, Zias adjusted the elevator cables and, with States’ approval, skipped steps in the maintenance manual, according to the Observer. The manual itself has come under criticism from Air Midwest, which said better instructions in the manual could have prevented the mis-rigging of the cables. Raytheon is now revising the manuals to make them easier to follow. The NTSB is expected to issue its final report on the causes of the crash at a Feb. 26 hearing in Washington, D.C.