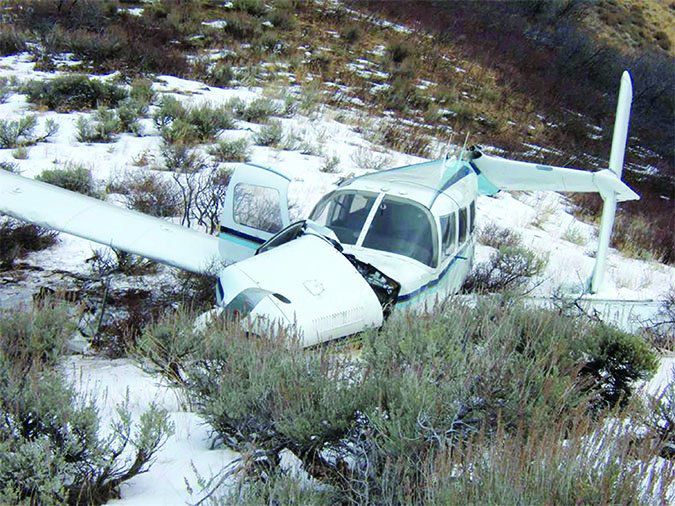 Consider a route I’ve flown several times before: from the Washington, D.C., area to Asheville, N.C. Back before GPS, you eventually got on V222 at Lynchburg, Va., and motored off to the southwest. The highest minimum en route altitude (MEA) is/was 6000 feet, and flying it in good visual conditions (VMC) highlights why: This is some of the highest, most rugged terrain east of the Mississippi River.

Flying that route is a nothingburger in good-day VMC, even in a basic single. The engine is no more likely to quit over mountains than anyplace else, and engine failures always are problematic when flying a single. But what if we changed the flight’s conditions to, say, bumpy night IMC in that same basic single? Suddenly, that nothingburger got spicy.

Why? The terrain hasn’t changed. The airplane didn’t suddenly become less reliable. And I didn’t become a worse pilot. What changed are the consequences of the engine failing: It’s far more difficult to pull off a successful dead-stick landing at night and/or in weather, no matter the terrain, than it is in good daytime VMC. Does that mean we don’t fly singles at night or in IMC? Of course not, but the basic risk of the operation—the likelihood of something “bad” happening—doesn’t change because the sun went down or the weather sucks. It’s the consequences that change. Spiffy. So how does that understanding affect our flying?

The quick answer is, it doesn’t have to. We can accept the risk of flying over inhospitable terrain in a single, and even the consequences of doing it at night and/or in IMC. (Whether our passengers embrace our solution is another question.) Others would look for options to minimize or eliminate the likely greater consequences of a single’s engine failing on that dark and stormy night. Looking for ways to minimize the consequences when something goes wrong pretty much defines risk management in personal aviation. But how we might go about it?

One of the first and most obvious choices we make when using a personal airplane is routing. We want to get from Point A to Point B, usually by the shortest, most direct route. So far, so good. What if that route increases the consequences of the risk in question, namely that our sole powerplant will fail at the worst possible time? Maybe change the route?

The images above show a ForeFlight session loaded with a typical route between Manassas, Va., and Asheville, N.C., down along V222. Even in a simple single, 8000 feet is a good altitude for that route, with more powerful airplanes doing better at 10,000 or higher. But those images don’t show us anything about the weather we can expect. The additional images below do, however.

Each of them graphically depicts an AIRMET—Tango for turbulence and Zulu for icing—at one or more points along our chosen route. In the case of our departure from Manassas, an AIRMET Zulu for icing is in effect from 2000 feet MSL to 12,000 feet. (So…we’re probably not launching from Manassas in a basic single. Not tonight, anyway.) If the icing doesn’t do us in, the turbulence will make it an unpleasant, tiring trip. The best choice is to leave the airplane in the hangar, reassess things in the morning, and plan to reschedule tomorrow’s meeting.

But what if we had the flexibility—or foresight—to be able to depart from, say, Richmond, Va? Even better, what if we were trying to fly the return? Getting into Manassas likely would be a bridge too far, but Richmond looks like it would be an ice-free piece of cake.

Another situation involves good weather at the departure from Manassas but icing at Asheville. While there are lots of divert airports nearby, a few of them—Knoxville or Tri-Cities, for example—probably aren’t going to be options, since they’ll likely be experiencing similar conditions. Better to bend the route south, maybe to the Greenville/Spartanburg area, or even Charlotte. If you can find a route into Asheville from the east, go for it, but leave yourself an out, preferably one closer to sea level.

It might not seem so when we spend a full day at the office then fly three hours for tomorrow’s meetings, but another factor under our control is the time of day we fly. In our original scenario, it’s a dark and stormy night over the mountains. The consequences of an engine failure are the issue, so why not fly in the daytime?

We can get up early the next morning, be airborne before dawn and be over the most inhospitable terrain in broad daylight. If the sun is up relatively early at our destination airport, we won’t even have to reschedule that morning meeting.

In fact, timing our flights to avoid increased risk or unacceptable consequences is a time-honored method of avoiding bad situations. For example, summertime thunderstorms in many parts of the U.S. mainly are a threat in the afternoon and early evening. To avoid them, one obvious and popular solution is to fly in the morning and early afternoon, landing before the thunderboomers become a factor. Other weather-related issues—especially fog and low ceilings—also can be negotiated rather easily by changing the schedule on which we want to fly.

But the gold standard of time shifting is to have the flexibility of flying on a completely different day, like the day before or the day after the bad weather moves through. The old saying, “If you have time to spare, go by air” strongly applies to personal aviation, and the ability to time-shift our flights around unfavorable conditions is yet another tool we can use to minimize the consequences of an airborne problem.

The best way to time shift is to stay flexible. Build your schedule around leaving tonight or in the morning to make your noon meeting. And once you’re on the ground at Point B, don’t launch for Point C until you’re ready.

Fatigue is another reason we may want to build in some flexibility to our schedules and flight planning. After that long day at the office, do you really want to flog a basic single in IMC for four hours, at night over the mountains? In turbulence? Probably without an autopilot?

Which should remind us that the airplane we fly also demands consideration. Given the potential for icing and the turbulence, flying a basic single on a trip like this places lots of additional risk on the table. Their consequences may not be as severe as losing the engine at night over the mountains, but then again they may. Basic singles are great choices for lots of pilots, but they’re not good choices on a night like this.

But what if we upgraded, say, to a Cirrus SR22? We’d get there faster, more comfortably and with the added benefit of an airframe parachute in case the engine fails. But that is only an incremental change in our worst-case set of consequences. A second engine would make at least the engine-failure risk minimal. Meanwhile, pulling the chute carries its own risks and consequences.

Of course, engine failures are not the only risk we might face along this route. The widespread AIRMET Zulu for icing bends the equipment curve sharply in favor of something with de-ice equipment, preferably flight in known icing. A warm pitot tube just doesn’t cut it. And while we’re at it, let’s add turbocharging to get above the turbulence. (Good luck getting a basic single up through the icing and to 14,000 feet, which is what you’ll need to cruise above the area defined in the AIRMET Tango.)

Along the way, however, the potential for icing and turbulence on this dark and stormy night are distractions, diverting our attention from the real solution to the consequences of an engine failure while on that route at night and in IMC: Fly an airplane with more than one engine. All it takes is money.

Don’t misunderstand—I’m not advocating that all singles should be parked at night. I have and will continue to fly mine in the dark, over mountains and/or in IMC. But I’ll do it with full knowledge of how my airplane is maintained and how it’s been operated for the last several years, something not all pilots can say with confidence.

Failure of our airplane’s single engine at night, in IMC and over the mountains is one of the worst-case scenarios we’ll face when it comes to flying personal airplanes. The good news is we likely don’t have to face it if we’re flexible and employ some strategic thinking when it comes to routes, timing and equipment. But engine failures aren’t the only risks we might come up against. We’ve already considered adverse weather, including turbulence and icing. What about thunderstorms or maintaining basic situation awareness?

This is going to sound like an old man yelling at clouds, but back when I started flying basic singles up and down V222, we didn’t have GPS, moving maps (unless it blew out the window) or in-cockpit weather information. To determine our groundspeed and whether we had to stop in Hickory for fuel, we used the number two VOR to find the side radials forming intersections and noted our time over various fixes, then used an E6-B whizwheel to divine the answer.

The technology we have in cockpits today makes most of this quaint, but also confers on us an increased sense of our invulnerability. None of that will matter much if the 1930s-era technology of our single engine quits on that dark and stormy night along V222.

We all experience risks in our everyday lives. The extent to which that risk is understood and minimized is the arena of risk management. But knowing something is risky—or dangerous, if you prefer—isn’t the same as accepting the consequences of what can happen when that risk becomes reality.

This article originally appeared in the April 2017 issue of Aviation Safety magazine.