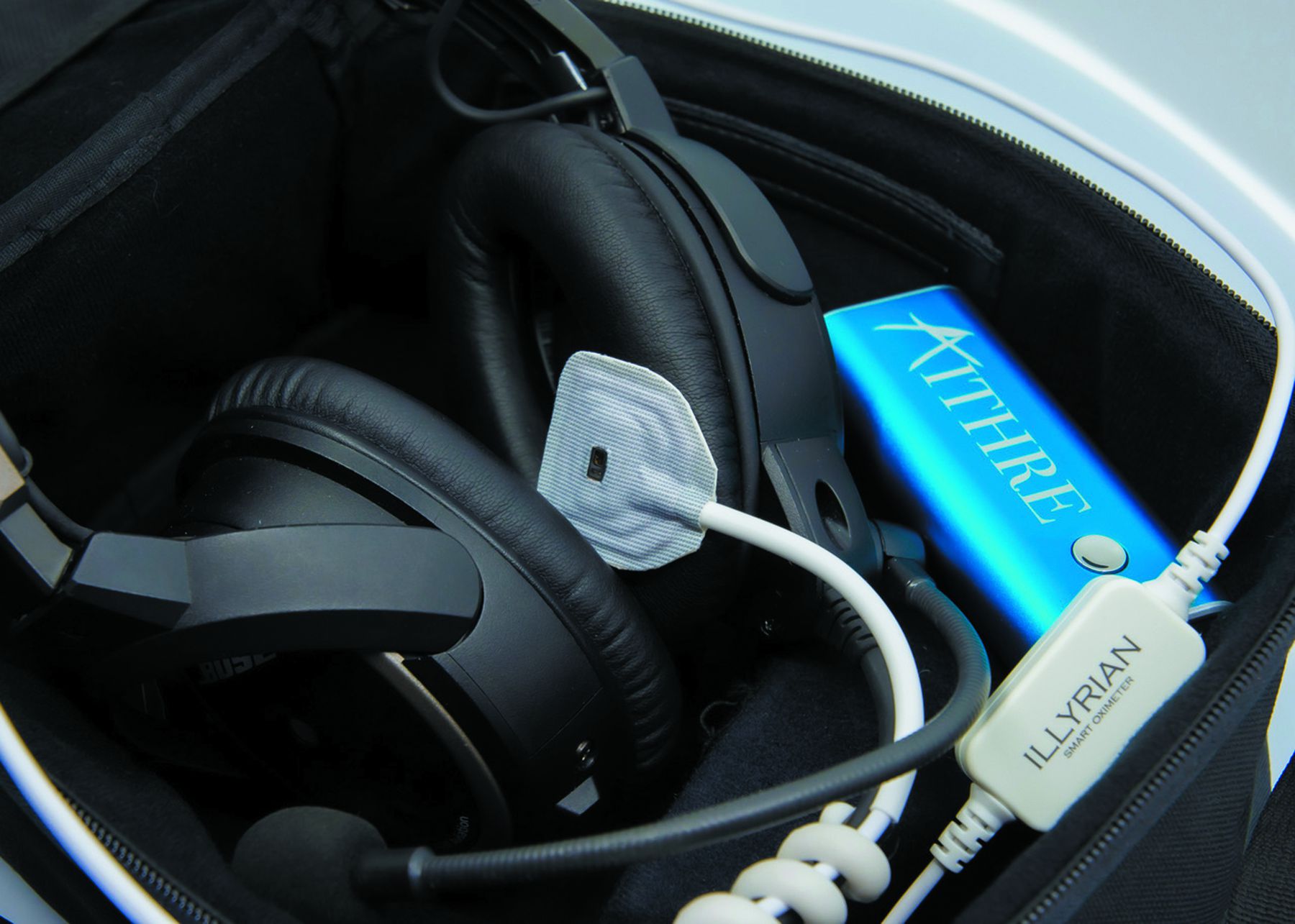 In the Innovations building at last year’s AirVenture, Idaho-based Aithre was showing what we think are the most innovative pilot-focused biometric devices we’ve seen. Aithre is an attention getter because surprisingly, there’s been a slow progression of gadgets for minding pilot and passenger health in the cabin.

For measuring blood-oxygen saturation, or SpO2, some finger pulse oximeters have Bluetooth and tablet app integration, and Garmin’s D2 Titanium aviator’s watch has a sensor for reading SpO2 and heart rate on the wrist, with some limitations.

And now Aithre takes an entirely different approach to full-time SpO2 monitoring via an under-headset earlobe sensor with the Illyrian smart oximeter. Here’s a field report.

Aithre was founded by Vans RV-10 builder, patent attorney and endurance athlete Jim Ruttler, who also studied neurobiology, and almost died from running out of oxygen in his RV while cruising the flight levels.

“In my airplane I have so many advanced avionics including synthetic vision, I can precisely measure parameters down to the exhaust temperature in a cylinder and I have multiple ways to look at fuel flow, but on that one passenger-carrying trip I couldn’t effectively monitor the O2 supply and everyone’s blood-oxygen levels,” Ruttler said. And it was that trip that sparked the idea to build a company focused on products that will. One is the Illyrian smart oximeter.

Priced at $169 and now distributed by Sporty’s, Aircraft Spruce and Pilot Mall, to name a few, the Illyrian is a departure from the familiar finger pulse-ox devices, which require cabin occupants to monitor on their own. Ruttler makes a good point that this is fine as long as they aren’t hypoxic. With the Illyrian you’re always connected to the Aithre Connect iOS-based interactive smartphone app. More on that in a minute.

Stick It Under The Ear

The Illyrian system’s main hardware consists of the SpO2 sensor, designed to sit under the earlobe or on the forehead using a supplied sport headband. It has a built-in BLE (Bluetooth Low Energy) wireless transmitter, and the Bluetooth antenna sits in a small junction box on the bottom of the sensor’s cable, keeping the transmitting antenna away from the head. The sensor automatically pairs and streams the measured data to the smartphone without any user action. This style of pulse oximeter is obviously boldly different than the familiar finger pulse ox device most of us use in the cabin. Never used one? Here’s brief review of SpO2 measuring.

With any pulse oximeter, a sensor shines a visible red and an infrared beam of light (through the finger or toe, to name two bodily locations) to detect the changes in color of the arterial blood. Once the device computes, it displays the measured blood oxygen saturation level on a display. In terms of aviating in an unpressurized cabin, clinicians make a good point that if you fly much above 6000 feet, you’ll be less oxygenated than you would be at sea level. In turn, pilots are taught to self-diagnose their own level of hypoxic symptoms, which of course includes carrying a pulse oximeter.

As recently as a decade ago, medical-grade oximeters sold for nearly $700, but you could bargain hunt and find some finger pulse ox devices for as little as $13.

The Illyrian sensor needs power, so the other component in the system is the supplied portable USB power bank. It has a power button, five battery life indicators and a handy flashlight function. It’s charged via Micro-USB input.

We fought with the power bank’s mode button the entire evaluation. While the bank stays on all the time and has good endurance, we found it difficult to simply turn the device off when trying to conserve power when it’s not in use. The problem is that the switch also turns the flashlight on or off, and at times that’s all we could get it to do without repeated button presses. It’s a bit quirky. The Bluetooth connection was flawless.

The company advises in the user’s manual that you need to use this specific power bank because since the measuring sensor draws so little power, some smart power banks will automatically shut off as they sense there’s nothing connected. While we didn’t try one, a panel USB port might be another choice for powering the sensor, but only if it’s in close proximity to the user. There’s roughly 38 inches of cable length to work with, from the base of the sensor to the base of the USB connector on the other end. On the other hand, the portable power bank will help streamline the sensor to the body—maybe stuff it in a shirt pocket to keep the sensor’s cable from dangling loose on the body. Last, included is a coil cable wrap for keeping the sensor’s interface cable ruly and intertwined with the headset’s downcable. The interface is about as good as any wired one can be, which isn’t great.

We tried the device with a Bose A20 headset, and also tried the sensor on the forehead with the sport headband. You’ll need to experiment. Aithre says that different individuals will find the best readings in different places of the body, and that the best performance is achieved under the earlobe or on the forehead—an area that worked well for us, but it requires wearing the headband to keep the sensor in place and directly on the skin’s surface. It’s awkward, for obvious reasons, and also because the darned power cord has to be looped behind the ear. Add an oxygen cannula, shoulder restraint, headset, sunglasses and maybe a ballcap to the mix … you get the point.

The majority of users will likely tuck the sensor pad under the headset earcup. But you have to get it right and it’s worth mentioning that the sensor does not read on the earlobe, but underneath it. Moreover, Aithre says that women and children often get inconsistent readings in this location, something we couldn’t substantiate in our evaluation. But what we did find, male or female, is that this location isn’t ideal if there is excessive head movement or even movement associated with typical cabin conversation.

We like that the Aithre Connect app notes the sampling quality of the SpO2 and blood pressure readings below the displayed values. That means if you get a reading that doesn’t quite look right, you can dismiss it as a bum sample—and then adjust the sensor. But in our trials, it worked well more than it didn’t. When the head was still and the sensor was placed in what we call the “sweet spot” under the earlobe, we consistently saw a “high” sampling quality. We compared the Illyrian’s measurements with the Masimo MightySat multifunction finger pulse oximeter—an accurate and high-quality device we’ve learned to rely on for flying and endurance sports training.

We also threw Garmin’s D2 Delta Titanium aviator’s watch in the mix. It has a wrist-based SpO2 and heart rate sensor built into the watch’s chassis. What we’ve learned to like about it is its basic data display in the Garmin Pilot smartphone app, but we’ve also learned to accept its measuring limitations. The heart rate data lags, and the SpO2 measuring is finicky at best (but accurate when it gets a clean sample).

Where plenty of cockpit apps have grown multiple layers deep, the Aithre Connect app is refreshingly shallow and straightforward. Its main purpose is full-time monitoring of your biometrics, and you start by turning the Apple Siri/popup notifications on in the app. For alerting, the default warnings trigger when the SpO2 drops below 92 percent and then again below 85 percent—which is indeed hypoxic. But you can also specify custom SpO2 warning levels within the Settings tab of the app.

But the app falls short in that the warnings are provided only once, “so as to avoid them being a nuisance,” the manual says. We think this should be user controlled, and Aithre is working on it. The app has an easy to decipher time-trend (up to 12 hours) graph for SpO2 and heart rate that’s overlaid against pressure altitude. The app is also interactive, offering regular hypoxia risk testing with custom interval quizzes.

The Aithre Connect iOS app includes a companion WatchOS app that tags along with the free download. It’s installed automatically on the Apple Watch once the iOS device downloads the Connect app. In turn the WatchOS app will display the SpO2 and blood pressure automatically when the Illyrian is paired with the main iOS device. For many that will be more convenient than keeping the Aithre Connect app open all the time, although the app does work in the background. We’d like to see future interfaces with popular third-party apps for simplicity.

Aithre’s Jim Ruttler feels strongly that passengers are often neglected when it comes to being monitored for hypoxia. As a result, the Aithre Connect app can simultaneously connect with up to six Illyrian oximeters, and at press time the company was offering a 50 percent discount for a second oximeter.

Additionally, the Illyrian can display biometric data on the Garmin G3X Touch, Dynon SkyView and the Advanced Flight Systems experimental avionics suites through the Aithre Shield EX 3.0. This device is integral to the company’s carbon monoxide and oxygen tank pressure measuring systems, which also display on the Aithre Connect app. We’ll look at these devices and their interfaces in a separate field report.

Minor warts aside, we think the Illyrian device is a good value for $169, and a solid utility for high-flying pilots who are serious about full-time hypoxia monitoring and alerting.

This article originally appeared in the February 2020 issue of Aviation Consumer magazine.