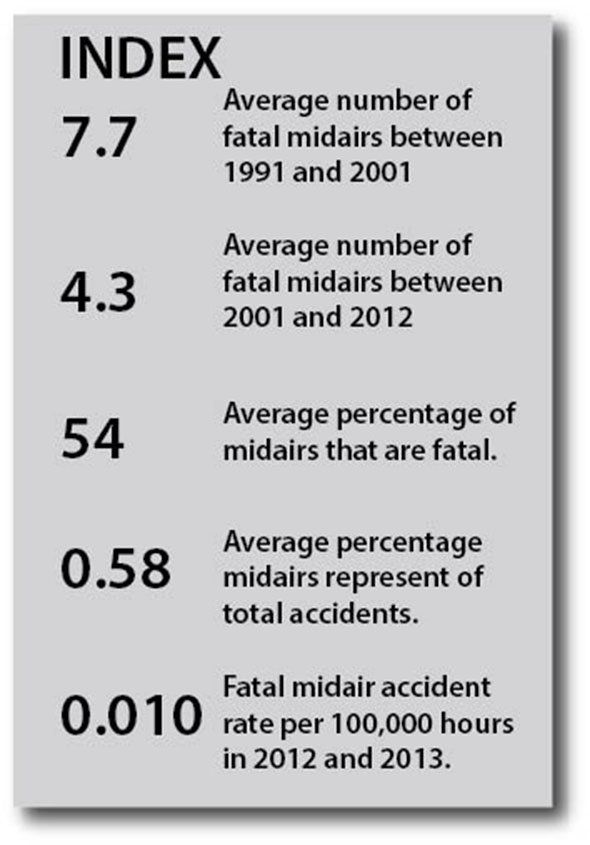 Whether we accept it or not, it’s true that humans tend to worry, sometimes obsessively and irrationally, about things that might harm them. That’s how terrorism works. Unless you’re in, say, Aleppo or Mosul, the likelihood of being killed in a terrorist attack is close to zero. Yet we duly have our shoes X-rayed and spend $60 billion a year on homeland security. Not many of us would say that because we do those things, we’ve pushed the odds in our favor.

Pilots aren’t immune to this phenomenon and, in some ways, they’re even more susceptible because aviation entails real risk and at the ugliest end of the spectrum, you can wind up as a pile of greasy gray ash at the bottom of a smoking hole. It’s human nature to judge every risk by the worst conceivable outcome of actually encountering it. But risk is a sliding scale that you can only judge by knowing the end points and what actually happens between them—not what you think happens or what could, but what actually does. The fact that most pilots don’t do this is why anti-collision systems have such appeal. As I’ll show here, this equipment may not reduce the risk of a fatal accident meaningfully, even though the products work exactly as intended.

What got me started on this is trying to understand the relative risk that the great buzzing hordes of small UAS clogging the airspace actually represent to light aircraft. And to understand that, it helps to put the risk of running into other airplanes into context. When I was reading over the NPRM and supporting docs, I thought surely the FAA would have done statistical modeling of all this, with variables representing different sizes and numbers of sUAS. But nope, it hasn’t. The NPRM concludes sUAS represent no significant risk due mainly to something called a “layered approach” to risk assessment and mitigation. (More on that in another blog.)

But that’s not to say no one has modeled the UAS collision risk and, no surprise, it’s the UAS guys. After all, they’ve got the perceived bad dog in the fight. At the University of Washington’s Autonomous Flight System Lab, researchers sought to put some numbers on the random nature of midair collisions. They came up with a novel way to do it,reasoning that the known behavior (and random collisions) of gas molecules could serve as a way to predict collision probabilities between VFR aircraft, including UAS. (PDF) To test the hypothesis, they compared the gas-molecule data to actual midair collision data and found a remarkably good fit. This allows two conclusions: manned airplanes under VFR run into each other at about the same random rate as gas molecules do and that’s pretty strong statistical evidence that see and avoid doesn’t work. (Because of a variance between the gas data and actual midairs, the paper concluded that see and avoid might work 14 percent of the time, but a bit better during the past few years. Possibly for a reason.)

The lab’s real-world data extend only to 2005, but I wanted to find out if see and avoid might have improved since then. No, I’m not suggesting we’ve suddenly gotten better at looking out the window, but that there are many more anti-collision devices out there that represent see and avoid electronically. Is the trend discernible? Decide for yourself. I carried the data out to 2012 and plotted three things: the number of midairs, the fatal midairs and fatal rate per 100,000 hours. The graph is below.

Is there a pattern here? Clearly there is, but it’s most obvious if you look at groupings of years before 2000 and after 2000. Between 1991 and 2001, there was an average of 7.7 fatal midairs per year, compared to 4.3 between 2002 and 2013. For 2012 and 2013, there were just two each. Are anti-collision devices responsible for this or did we just get lucky? It’s impossible to say for sure. I can’t find any data on how many traffic systems are out there, but my guess would be about 25 percent of the GA fleet. I’m guessing that traffic gear has driven the midair numbers down, but I can’t prove it.

But here’s the thing: Even if that’s true or if anti-collision equipment penetration is 50 or 60 percent, this equipment has reduced the already tiny risk a midair collision represents just a little. Take the worst year with the highest rate—1997 and 1998 were about tied. A rate of 0.043/100,000 hours represents a fatal midair occurrence of less than one in about two million hours. Just for reference, that’s about airline-level risk. IATA estimates the most recent airline hull-loss risk at about 0.23/1M departures or one in 4.4 million flights. There’s a little apples to oranges there because GA data is hours, airline data is departures. But you get the drift.

Consider 2012 and 2013 for a moment, whose two fatal accidents are almost outliers. Those actually do represent near order-of-magnitude risk decreases. But it’s too soon to say if they mark a trend. Five years from now, they just might. If that did happen, the one in 10 million risk those numbers represent would be functionally close to zero.

Bottom line: Of all the things to worry about, having a midair should be way down the list, far behind running out of gas, stalls, loss of control, mechanical failure and several other categories of mayhem that can kill you. And Tad McGeer, a pilot and UAS entrepreneur involved in the AFS research, told me that adding a sUAS to the traffic mix represents no more risk than adding another manned aircraft to the same airspace, reasoning that whether the pilot—or operator—is looking out the window demonstrably doesn’t make much difference. (See his paper here. PDF )Carrying that forward, adding traffic equipment to either or both airplanes might reduce the odds of a midair, but not by much and certainly not as much as many of us think.

Just because the numbers show pilots have the sentience of a hydrogen molecule isn’t reason to argue against anti-collision equipment. It has a secondary effect for GA pilots, and that’s comfort factor. They might make passengers and nervous spouses happy and traffic gear also help with planning and awareness. In highly congested airspace, the midair risk goes up and a set of electronic eyeballs should be welcome. Those benefits alone might be worth the cost, even if the real risk reduction isn’t. Perversely, the aircraft that might benefit most from anti-collision equipment often don’t have it: trainers. By the way, in addition to the low risk, just a bit more than 50 percent of midairs involve fatalities. It’s commonly thought that midairs are usually fatal.

Nor does any of this suggest that a sUAS or mUAS couldn’t cause an accident. It could happen tomorrow. Or the next day. But that still wouldn’t change the overall risk factors. If you’ve had a close call in the pattern—and face it, many of us have—it scares the hell out of you and if gas molecules had emotions, they would agree. But they still didn’t collide and that’s all that matters. And of course, you should still diligently look out the window, even if doing so might not protect you as much you think. But if it does once, that’s enough. Proof of that came in just as I was finishing this blog, on the report of the helicopter midair in Argentina and 10 fatalities. Intentional formation flights change the rules entirely.

In a subsequent blog, we’ll look at emerging methods to track UAVs electronically.

Join the conversation.
Read others’ comments andpost your own.