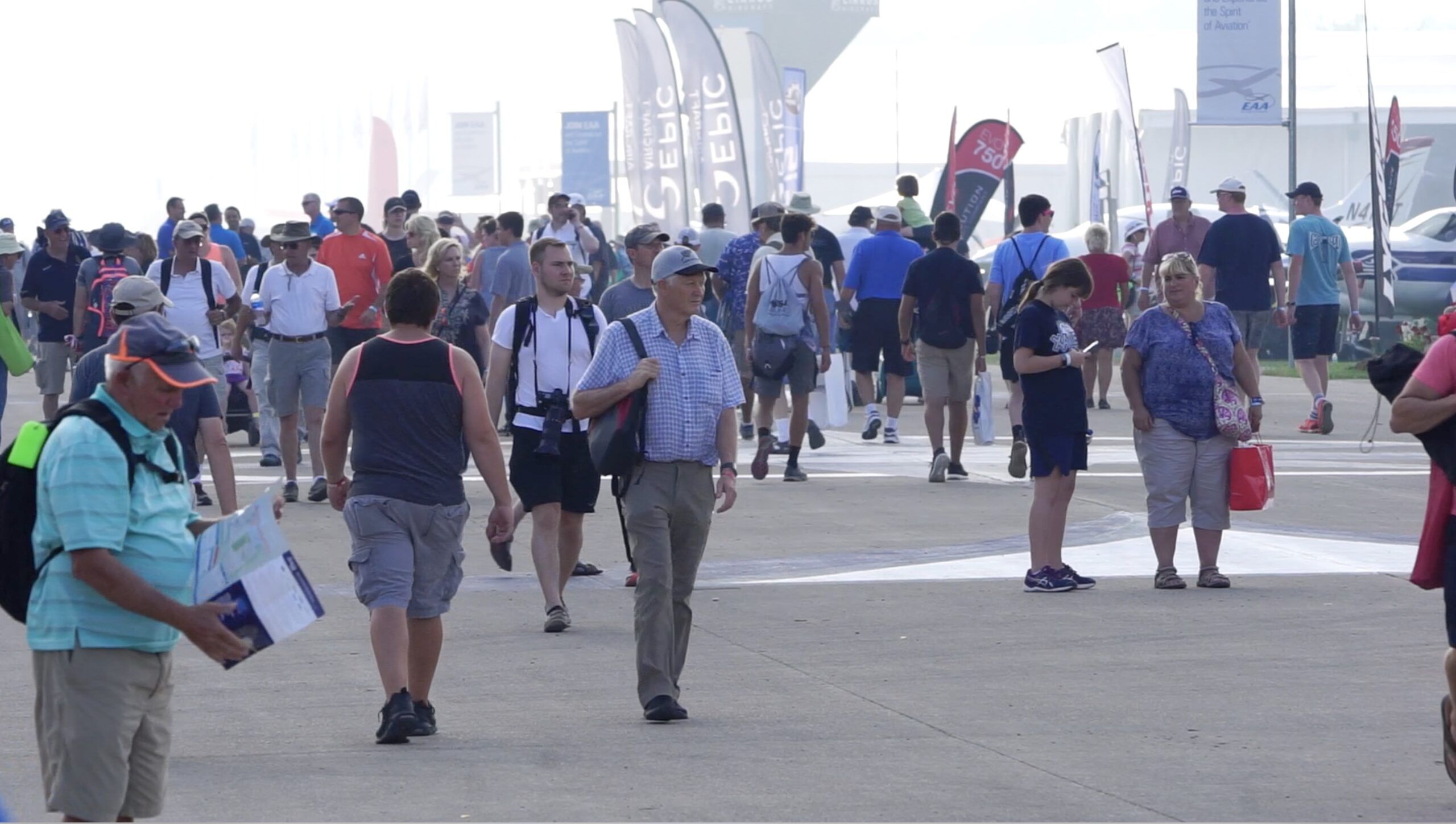 With AirVenture returning to the show circuit after 24 months in hibernation, it seemed impossibly tacky not to write an advance blog about it. I’m so excited, I’m packing an extra box of Depends and transitioning soon to decaf, just to keep things on an even strain.

Actually, I am not excited about the airline trip north, via Chicago and Appleton. Nothing I’ve read or seen makes me think the airline biz is sorted out yet and I think it’s going to be awhile before it is. I’m practicing Zen breathing and forced catalepsy while in the seated position; upright, no recline. It’s only three and half hours. I can stand on my head for that long.

Based on my observations at Sun ‘n Fun, I’m looking forward to being amused at the inevitable stutter starts when a galactic force like AirVenture stops for two years, then lurches into frenzied renewal as though nothing at all has happened. A lot has happened. Let me preload a few questions for you.

“Was this [insert thing] like this two years ago?” No, it probably wasn’t.

“Maybe it’s just me, but are there more porta-potties than ever?” It’s not just you, there probably will be more than ever, plus handy stations to delouse yourself and wash your hands. A lot of them.

“Didn’t the CAP cadets used to march in step?” No, as far as we know, they never did. They tried, but without obscene cadence songs, it never works. They may be six feet apart this year.

“Say, I don’t remember there being two airshows going on at once.” Right about this. There will be two boxes to spread out the crowds along the flight line.

Being journalists and all, if a little jaded, we can’t resist speculating about what kind of show this will be. My prediction on attendance is that it will be robust, perhaps approaching 2019 levels. We already know there will be slightly fewer exhibitors, but it looks like the biggies will be back in town.

New stuff? Some, but not a bumper year. Garmin doesn’t have its usual megaload of dazzling hardware, but it pre-announced a software add-on for its navigators called Smart Glide, which throws a little AI magic at the engine failure nightmare. Avidyne also pre-announced a new upgrade package for legacy Cirrus airplanes and they’re ready to show it at OSH. Stratos also pre-announced the appearance of its 716X, an experimental version of the under-certification 716. Another avionics company, Adventure Pilot, is teaming with SA Photonics to show off a headset mounted display called PilotVision.

You may have noticed a pattern here: pre-announced. Companies have done this before at AirVenture, but my view is that we never see enough of it. In modern marketing, social media and web drives product buzz and a press conference announcing something is like so … 25 years ago. If you’re having one anyway, it probably means your social and web efforts are lagging or maybe you’re having press conference to report how well your social and web really did.

Pre-announcing an event at AirVenture causes a lot of people to see what’s coming and, if they’re interested, beat a path to the booth for an eyes-on look rather than relying on a bunch of cranky journalists to scribble down what was said, write it, then publish it. The dirty little secret is that if the product or event is pre-announced, we still cover it anyway as a second-day news story so there’s ever more exposure and people who missed the announcement get another chance to see it. (Plus, I’m not a fan of press conferences. Increasingly, they’re starting to remind me of Home Room.)

Has the pandemic changed the way companies are thinking about this and doing business? For Avidyne, the answer is yes. “Yeah we got pretty good at doing the webinar thing during COVID,” says Avidyne’s Tim Harper, “and we have tried to do pre-show briefings with the media for several years. But Dan [Schwinn] wanted to do something special with this Vantage launch and we thought it went off pretty well … the idea of course is to create awareness prior to the show so people will make it a point to come by the booth and see it. We’ll see how that goes.” The company held a webinar on Wednesday to roll out the Vantage. If I were in charge of marketing something, that’s exactly how I’d do it.

I’m really pining for some kind of outlandish surprise, like in 2006 when Cessna did an unannounced fly-by of what they were calling the NexGen airplane. Nothing came of it, but it was quite a sensation. It would, we thought at the time, have been a reiteration of the still-popular 210. So, Joby, if you’re listening, beat-up the field in one of those E-VTOLs, hover at show center and then disappear over the truck factory. That’ll stir up some buzz. While we’re at it, how about a few of those hypersonic tic-tacs? We know they’re out there.

Speaking of buzz, I’m hearing just a little of that concerning COVID-19 risk. A vendor mentioned to me in an email that he’s a little worried about what going on with the Delta variant of this virus. Well, so am I. As they are throughout the U.S., infection rates are trending up in Wisconsin with a surge in hospitalizations over the weekend. But the overall numbers are still quite small. (Here’s EAA’s current COVID guidance.)

Of course, Oshkosh in July is not Wisconsin, it’s the entire world with thousands of people coming in from all over the globe. It could just as easily be that the AirVenture population has a far-above-average vaccination rate as one that’s a fraction of the national average. And there is no way to assess this nor to assess the personal risk in attending. In a circumstance like this, I would normally say accept the risk, just don’t do anything stupid.

But what’s stupid? I have no idea. Is it camping and sharing the showers? Is it hanging around a crowded vendor booth? Standing in line for a brat or at the grocery store? I have and can offer no wisdom. I plan to carry masks but don’t know if I’ll use them. I will avoid large crowds wherever I can and if we encounter each other, don’t be offended if I stand six feet away. Upwind.

So if I see you at the show, it may be at a distance.