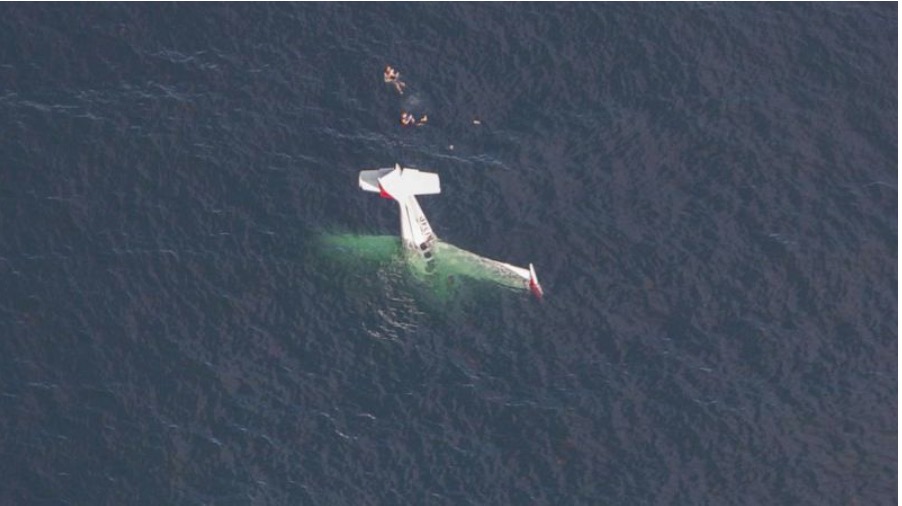 These days, you can’t hardly open a Bonanza door without bumping into another miracle. This time, it’s Pilot, Passenger Miraculously  Survive Crash Into Pacific. And we know it’s a miracle, because of another headline that blares, Man Films Own Airplane Crash, Helicopter Rescue. (See the video here and here.) And try not to be discouraged by the second-day headlines: Pilot Denies Half Moon Bay Ditching Was a Stunt; Blames Bad Gasoline.

Sigh. When I started my news career we couldn’t have imagined such a headline, much less written it. In those days, bait didn’t have a click with it and it was something that went on the end of a fishhook or what the sleazy local car dealer did before switching you from that $99-a-month Mustang Fastback to the used Falcon you could barely afford.

That messes up my segue from fish to water, but stay with me because I’m trying to have a higher purpose here, ignoring momentarily the inconvenient fact that the pilot self described himself as a social media daredevil. Certainly there must be something we can take from Man Films Own Aircraft Crash. Conceding that this story will mature with time and we’ll learn more details, one thing should be glaringly obvious.

I know you saw it immediately. And mea culpa on me for not mentioning it the last time I wrote about maritime miracles oh, last month. The man filming here, David Lesh, has a waterproof phone, but no flotation devices. No raft, no vest, no Styrofoam cooler. Nada.  (No points for the seat cushions.) Stipulating the exception for dramatic social media equipage, for those of us lacking a star in the YouTube galaxy, that’s an oversight.

I should have mentioned flotation in the last ditching commentary, although you’re unlikely to need it or have time for it in an off-the-beach splashdown. Still better to have it than not. Leading me to this conclusion: Personal flotation devices should be standard equipment in every airplane. Period. OK, maybe the exception is desert dwellers unlikely to see a river or lake.

Along with that, add a basic medical kit and signaling stuff, such as a mirror, flare or smoke device. They take up almost no room and you’re unlikely to ever need them. But unlikely isn’t the same as never.

While you’re at it, throw a couple of big yard waste plastic bags back there, too. In cold water, you can shimmy into these to retain a little heat. It’s not much, but it could make a difference when you’re not carrying a raft or full-up survival suit, which most of us don’t. In many of the ditching accidents I’ve researched, pilots have gone into water unexpectedly because they thought they were within gliding distance of land. Think about that while crossing Long Island Sound at 3000 feet in January. At night.

If you’ve ever gone swimming at, say, Stinson Beach near San Francisco, you know the Pacific is frigid, even in summer. Half Moon Bay, where this Bonanza F33 ditched, is at 60 degrees in August. In water that cold, hypothermia sets in in under 30 minutes and the tables give survival at one to two hours. It can take that long to get a rescue case moving and then they have to find the survivors. Often, nearby boats do the fishing, but you can’t count on that. These Bonanza survivors were recovered in about 30 minutes, thanks to the flight being a two-ship and thanks to a Coast Guard helo already airborne. You can take the pilot’s denial of planning aforethought at face value. Or not.

In this article, KITPLANES contributor Dave Prizio wrote about his experience ditching his Legend Cub off Catalina. He had the PFD and had it on, although a passenger didn’t. Both survived.

Prizio would tell you what every other dunking survivor would: Treading water isn’t a good survival strategy, even though it worked this time.