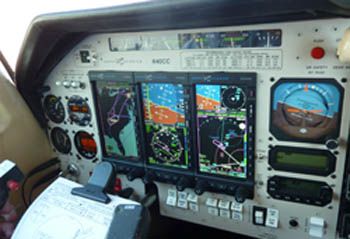 In writing about things to do with airplanes, I find myself using the word “progress” advisedly, especially when discussing anything to do with regulation. Unfortunately, that includes about everything. One area where progress has been glacially slow is convincing the FAA to give up on the idea of requiring steam gauges to backup glass panel suites in certified airplanes. Most piston airplanes flying with glass-new or used-have as many as three steam gauges still in the panel-an airspeed indicator, an altimeter and an attitude indicator.This really did make sense when glass first appeared in volume five years ago. Although the manufacturers had some fancy predictive algorithms on reliability of glass systems, they were just that, predictions. Five years hence, we’re now in sight of ridding the panel entirely of vacuum or even electrically driven gyros. I flew in one such airplane on Thursday, a Mooney 231 that I used to own but sold to Peter Lyons in 2007. Lyons is one of the founders of Aspen Avionics so no surprise that the Mooney now has a lavish three-display Aspen system-two EFD1000 PFDs and an EFD500 for chart, map, weather and other functions.The last time I saw this airplane three years ago, it had a not-that-shabby Century HSI, a Garmin 530 and an MX20 multi-function display. When I slid behind the new glass Thursday morning, the overwhelming sensation was a little disorienting. Actually, it was closer to vertigo. To fit everything into the panel, most of the basic elements were moved around, except for the center radio stack. To stuff all those boxes into the old panel, we had to stick the JPI engine monitor down on the lower pedestal, an unhappy compromise. Now the monitor is where it ought to be: left of the main displays and right in the pilot’s direct view. And here’s the interesting part: The new panel has vastly more capability in a much smaller space, with a largish unoccupied space on the co-pilot side. The weight and payload of all of this was a wash. The workmanship and detail–done by Santa Fe Aero Services–superb.

In current installations, with dual ADAHRS, which this is, the only required backup is an AI, which the Mooney has. Going forward, perhaps by next year, Aspen sees a path to eliminate even that backup, ushering in the era of full glass for legacy airplanes. The technical hurdle to be overcome is the single-point failure of compromised pitot-static data. Lyons told me Aspen has a solution for this, but it isn’t ready to talk about the details.Electrically, the Aspens come standard with an onboard lithium backup battery sufficient for 30 to 40 minutes of operation. As an option, you can add an additional lithium backup which will run a PFD for two hours-more than enough to resolve the typical electrical failure scenario. Although the Aspens rely on external navigators for detailed nav data, they also have their own internal GPS sensors which are suitable for limp-home navigation.Looking forward, if I were redoing that panel again, I would take the full-glass option, lose the backup AI and the vacuum pump. I might consider a second alternator in its place, if feasible, but maybe not even that. Not so long ago in that Mooney, I flew a lot of low IFR, some of it at night. I’m less interested in that now. Age does that to you. It’s not a Part 25 transport category airplane, has definite limitations and I’d be willing to live with them, so why spend the money on impractical redundancy that you’re unlikely to need. After all, there’s still only one engine.Later in the day Thursday, I toured Aspen’s factory in Albuquerque and learned how the company tests each of these unit before they’re shipped. It’s interesting stuff. I’ll post a video on that and my flight with Peter in a few days.