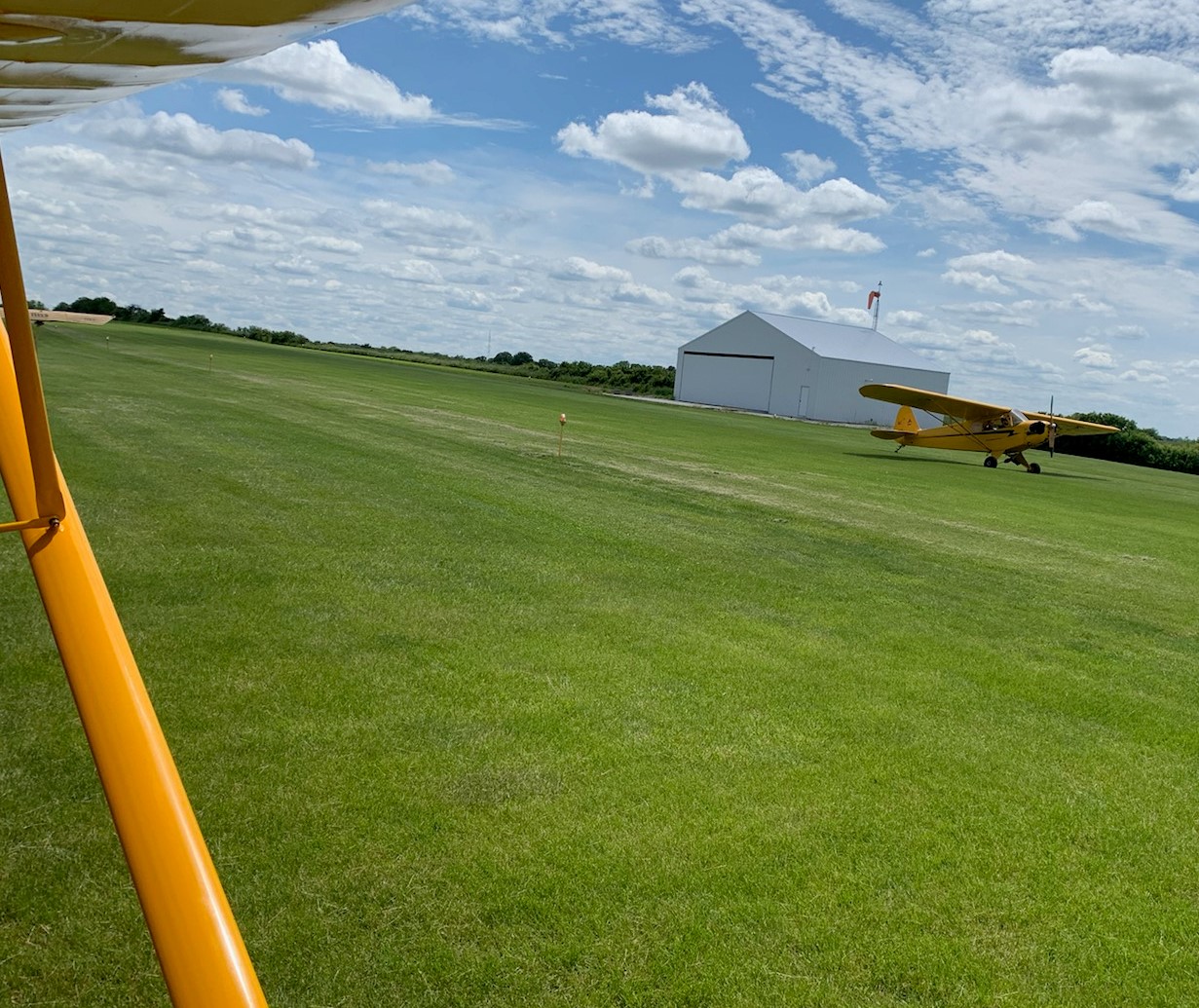 All airplanes should be yellow. Cub yellow, even though I’m not a huge fan of J-3s but admit they’re fetching in Lock Haven livery with tails in the grass. I’ve known some off-color Cub pilots, such as Brian in California, who back in the 1970s flew a green Cub. Flew it well, too, by avoiding pavement. Vern, the airport manager, gave up telling him to conform, because Brian would smile, nod, then take off from the grass between the runway and taxiway. Gotta admire passive rebellion.

I long ago shunned pavement for turf and mud—which sounds like the name of a bar in Louisville—and while holding short of our grass runway for neighbor Sean to land his yellow Cub and take forever to taxi past, I had one of those Aero Zen moments, usually attributed to carbon monoxide leaks. Everything was perfect. The view through the open window was blue, gray, green, and yellow—sky, clouds, grass, and Cub plus my Champ’s wing and struts. Even the wind-T was yellow, faded after 49 years from its original orange. We should repaint it but never will. Instead, we’ll form a committee to explore color options; then, invoking the vacuous phrase, “as we go forward,” gin up an action plan to guarantee nothing gets done. The Army taught me the best way to kill a good idea is to exile it to the Isle of Ad Hocs. My FAA career bolstered this insight. I’d excel in Congress but have loftier ambitions.

Consider how long the FAA’s taking to raise LSA weight limits. Yeah, it’s complicated. But not really. Here’s how I’d unclog LSA regs as your FAA Administrator, speaking ex cathedra: “Henceforth, LSAs may weigh 3600 pounds, 4000 if you paint your Stinson Station Wagon yellow. Any complaints, and I’ll raise ‘em all to 4500.” Then, I’d press my signet ring into hot wax to seal the proclamation.

Back to this perfectly hued Midwestern day. The engine had started on the first pull. No valves stuck as they tend to if I really want to fly or I’m far from home. The CTAF was oddly silent, without, “Traffic in the area, please advise” or, “on a 12-mile final,” followed by position reports every quarter of a mile. Instead, radio silence amplified the serenity. Truth is, my KX99’s battery has been dead for months, and I can’t find the charger. Sean’s Cub left the factory in 1940 without avionics and suffered no upgrades since. Somehow, we manage.

Side gripe: Last fall I was lazy-eighting with a friend in her Citabria and monitoring 122.8, when a Mooney pilot announced his position, “five southwest of (a nearby airport), heading 050 …” and added his altitude: “7500 feet, MSL.” That’s 6500 feet above field elevation. “Curious,” I thought. Next, he reported crossing that airport, followed by announcing he was “clear northeast.” He repeated these mindless updates—a mile above the planet—over each subsequent airfield enroute, until his signal faded. This illustrates a good reason to use VFR radar flight following because babble like that in ATC’s earpiece, and the controller will train a space laser on you. Yes, they’re developing that capability.

Back to the grass field. Without ADS-B, the snooping world could not see the two yellow airplanes grazing on the green Iowa grass. No one but us/we knew of our existence or intentions. No one, that is, except that blue sky with clouds that challenged description. If this were a check ride, I’d wow the examiner by labeling them alto fracto cumulus, a term I encountered at Weather Slam Open Mic Nite in the Turf and Mud Lounge. Inviting, but with bases about 7000 feet above us, if I couldn’t catch a thermal, I wasn’t going to waste fuel climbing the Champ just for a Joni Mitchell* look from the other side. Plus, in Class E airspace I’d be ethically and legally bound to remain 500-1000-2000 feet below, above, or beside them, which is like telling a little kid not to touch anything in a toy store.

Instrument pilots know the gasping joy of popping from the top of cream puffs miles above the planet and cruising in clear air, easily the best reason for being IFR empowered. Practicality has its place, I suppose, but it is possible to utilize IFRness to repeatedly punch through clouds just for giggles. I got the idea years ago while riding jump seat in a Boeing 727 freighter to somewhere a bunch of boxes needed to be.

Climbing to FL230 (23,000 feet), we started to clear the overcast at 11,000. Gray cloud matter splattered across cartoon sunlight, casting a trijet shadow inside a circular rainbow, breaching the castellated tops. And that’s when the captain disengaged autopilot and requested to momentarily level off. “Approved,” the controller yawned. Maybe only 60 seconds, but long enough for us kids to experience the unearthly thrill of machines abusing clouds before climbing back to reality. It inspired a plan.

Plan: Instrument training need not be a repetitive drill of interminable holds and approaches. When the sky is blue and puffed with non-threatening cumulos, emitting 50 shades of Ansel Adams gray, shuck the Foggles. Request a block altitude and an impromptu “practice area,” defined horizontally by old school radial/DME or a playpen of RNAV fixes. If the controller’s agreeable—most are—and not busy, her “approved as requested, maintain between 5000 and 7000,” is a license to kill clouds from both sides now.

Slice and mash them, shave their tops, dogfight your shadow inside its rainbow (while respecting 91.303 Aerobatic Flight regs), and practice upset recovery when you totally disorient yourself. Perhaps this plan needs a slight rethink, but a taste of it can be experienced in even a 91.205(d) minimally equipped IFR aircraft. Anything, that plunges you into the blue and gray above the green, provided whatever you’re flying is painted yellow as Nature, and school bus drivers, intended. And as FAA Administrator, I shall mandate.

*Ed note: Joni Mitchell wrote it, but you heard it because Judy Collins’ bright and hopeful version of it marched smartly up the charts in 1968. Mitchell’s version was so darkly lugubrious that most people who heard it became alcoholics or blog editors. In some cases, both.