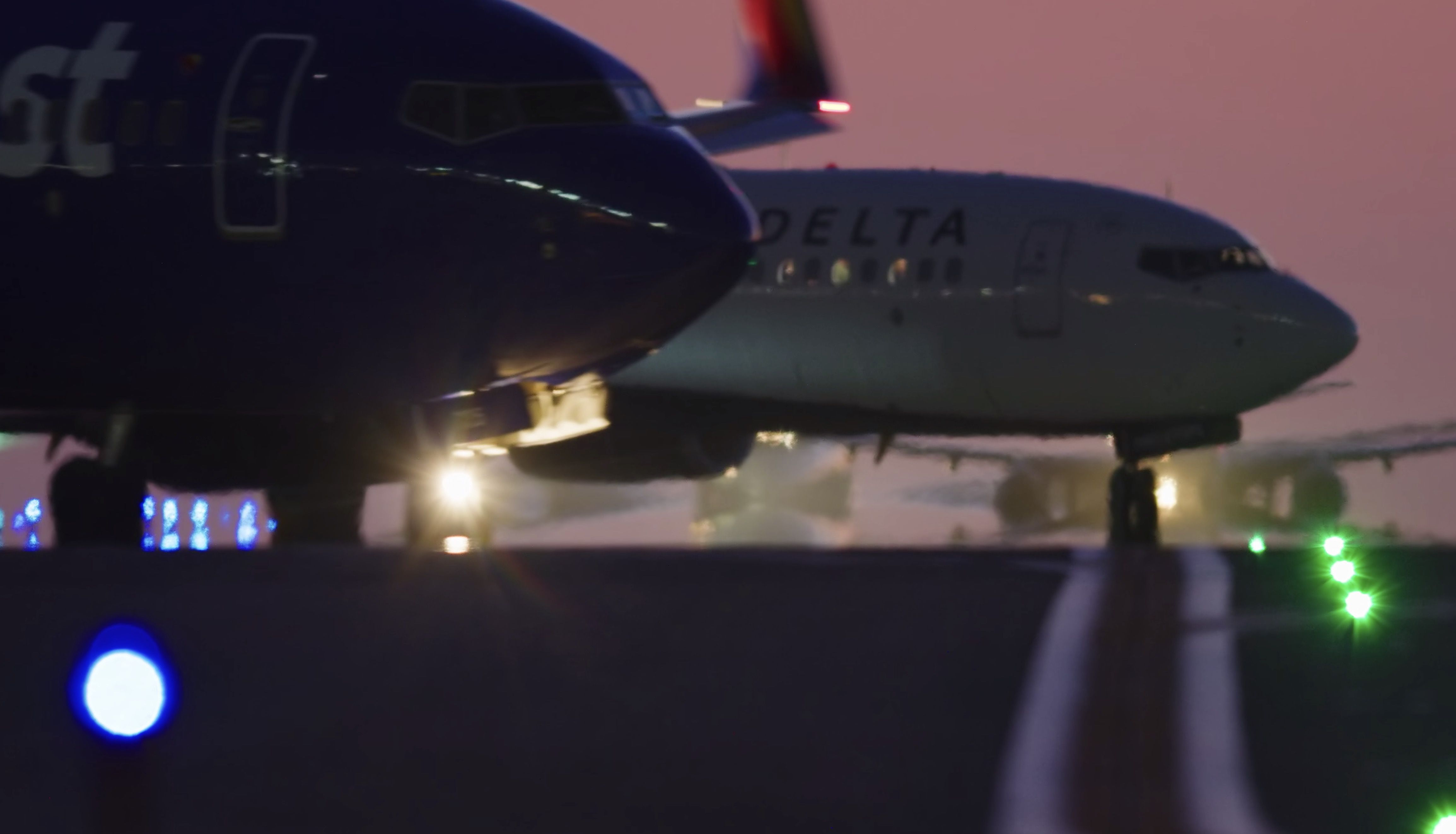 The film accompanying this blog, WORLD WAY: The City of LAX, follows the layers of movement at a major airport through timelapse photography. The idea for this piece was born in 2013 as I sat on a rooftop in El Segundo, waiting for a shoot on another subject to begin and looking out over Los Angeles.

The incoming planes looked like a highway, evenly spaced and spread across multiple lanes. This led my eye to the end of their path—LAX, the second busiest airport in the U.S. behind Atlanta and the third busiest in the world.

I realized I had a fully unobstructed view of the airport and immediately started capturing timelapses of it. I became fascinated with the many layers of movement that were visible—airplanes taking off and landing, airplanes taxiing, ground support equipment moving on the ramp and throughout the airport, passenger vehicles on World Way, passengers on foot outside and inside the airport—all moving at their own unique pace. It made me realize that LAX is a city unto itself, with so many moving pieces and individual people all doing their part to keep it moving. Despite its struggles, it is a logistical and modern marvel.

After that first night, I set off trying to create this short film. It took years to figure out how to gain access to all the unique angles I wanted to capture. In 2016, with support from the Los Angeles Tourism and Convention Board and Los Angeles World Airports, we started filming. It took more than three years to complete as my team navigated the hurdles of filming in such a controlled environment. But in the end, we got (almost) all of the locations we were after. Some highlights for me:

We used timelapse and slow motion to highlight the layers of movement in a way that our eye cannot see. My initial goal for this project was simply to show visually interesting movements from such a busy and unique place. But as time passed, it became more about showing everything we don’t see that goes into keeping such a complex place operating, and to help people appreciate LAX in a new way. The editing was intense—trying to comb through material captured over three years in a place that’s constantly changing and turn it into something coherent was definitely a process. And trying to pick from so many awesome moments to determine what makes the cut. I had help filming this from a handful of people and I’m the only one on the crew that is really into aviation, but it was awesome to see everyone get super excited and into it whenever we were there.

Visiting LAX so many times during this project without any intention of flying really opened my eyes and made me look at it through a different lens. While it’s easy (and not without reason) to become frustrated with construction, traffic, delays, and all the issues afflicting modern commercial air travel, I am also amazed that this place operates as well as it does, safely and securely, day in and day out.

Next time you find yourself there, take a moment and have a closer look at all the layers of movement happening around you, inside and out. You can’t help but be impressed.

Chris Pritchard is a Los Angeles-based photographer and cinematographer, focusing on timelapse and other high quality and high-resolution visuals. He’s an avid traveler and has created content for commercial, television, and film projects in hundreds of locations across five continents.