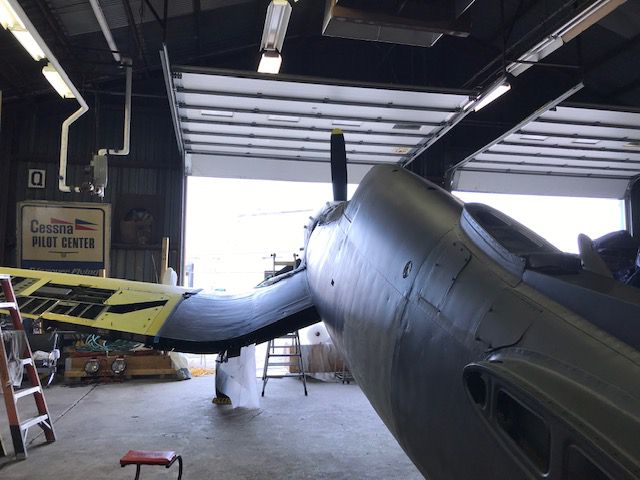 When President Eisenhower warned of the military industrial complex in his famous farewell speech of 1961, he knew of what he spoke. Even during World War II, the military and political considerations were so interwoven as to be sometimes indistinguishable.

Signs of this are everywhere and one of the more obscure ones squats across the street from Sikorsky Airport in Bridgeport, Connecticut, where we once based our Mooney. It’s a low-slung, drab brick building the locals know as 550—for its address on Main Street—but is officially known as the Stratford Army Engine Plant. It has a storied history. Sikorsky built three of its seaplane models there and Vought-Sikorsky used it and other buildings to manufacture the VS-300, an early production helicopter and the OS2U Kingfisher, among other designs.

Wright made R-1820 piston engines in this facility and eventually, Lycoming took over and built variants of the T53 turboshaft engine that powered the UH-1 helicopter. In those days, the vast parking lot in front of 550 was full. Now it’s crumbling and weed strewn. The plant has been dark and empty since 1995.

And yet … the government still owns it and a security staff mans the front desk for reasons probably specified in some spec or contract that would cause Eisenhower’s eyes to roll were he still alive. But the guard serves one unique function: He provides the government-required security briefing to gain access to one of the oddest air museums in the country: the Connecticut Air & Space Center. Yes, it’s a civil facility, but it occupies space in government-owned buildings so permission to enter is required. The guard does that, and directs you around the corner to Sniffens Lane, where the museum is.

Calling it a museum may be a little high toned if you think of a museum as the sort of things that exist in Washington or Seattle. First of all, the buildings themselves are just as storied as 550. The center is in buildings 6 and 53, which are considered part of the Stratford engine plant. In this group of buildings—and they aren’t very big—Chance Vought built the F4U-4 Corsair piston fighter, an airplane that might not have been one of the most consequential of World War II but was, with its iconic gull wings, certainly the most graceful.

More than 12,500 were built and not all of them by Chance Vought. Brewster and Goodyear built a combined 8300 Corsairs. Production continued in these buildings until 1952, providing new airplanes for the Korean War effort.

All that’s long gone now, but the legacy survives because both Bridgeport and CASC are very much Corsair oriented. When I was flying out of Bridgeport, the airport entrance had a Corsair on a pole to greet visitors. Now that very same airplane—ironically, a Goodyear-built version—is being fully restored by CASC, eventually to occupy a static display in the original restored Curtis Flying School hangar. It’s one of several ambitious projects underway at CASC.

When we visited late this summer, Charlie Vesterman showed us around the center. He’s a Sikorsky Aircraft alumnus—one of many in these parts—and in charge of one of the most ambitious restoration projects I’ve seen yet: an S-60 Skycrane. Bits and pieces of it were scattered throughout the shop in various stages of completion.

I saw the S-60s all over the place when I was in the Army and assumed hundreds of them must have been manufactured. Nope, says, Charlie, only 99. Quite a few are still flying in civilian service as water bombers and specialized heavy-lift. A guy facing rearward flying with his eyeballs directly on the load is perfect for lining up the plates of a transmission tower with the foundation pads.

I admire people who can do this kind of restoration work while at the same being baffled that they can do it at all. It takes equal measures of technical skill, resourcefulness, creativity and, above all, patience to find or make all the parts and pieces of a defunct aircraft.

CASC is probably more workshop than museum and some of the “exhibits” are just airplanes unceremoniously parked on the shop floor. No conservator-grade placards with anodyne prose, just the object itself. One of my favorites was a P&W 4098 turbofan—a Boeing 777 engine. I’d never been up close to one and they’ve got it displayed with the cowls open so you can probe around the core and even give the fan a spin. (You can feel the enormous weight of it.)

Throughout the shop are Corsair mementos. An aircraft carrier with its deck covered in parked airplanes; various models and pieces of actual airplanes. And lots of photos of Chance Vought at the height of its World War II glory. In one photo, Corsair center sections, with that unmistakable upswept wing, march to the back of the plant like an Escher vanishing point.

If you like interesting aviation sites that are off the beaten path, I recommend the Connecticut Air and Space Center. Find the website here. Admission is free, but be sure to throw some cash into the donation jars. They need all the support they can get.

Access the site through 550, as mentioned above. The security guard has absolutely nothing else to do and seems to hunger for human contact. Can’t say I blame him. Guarding a ghostly factory can’t be fun, but visiting CASC surely is.