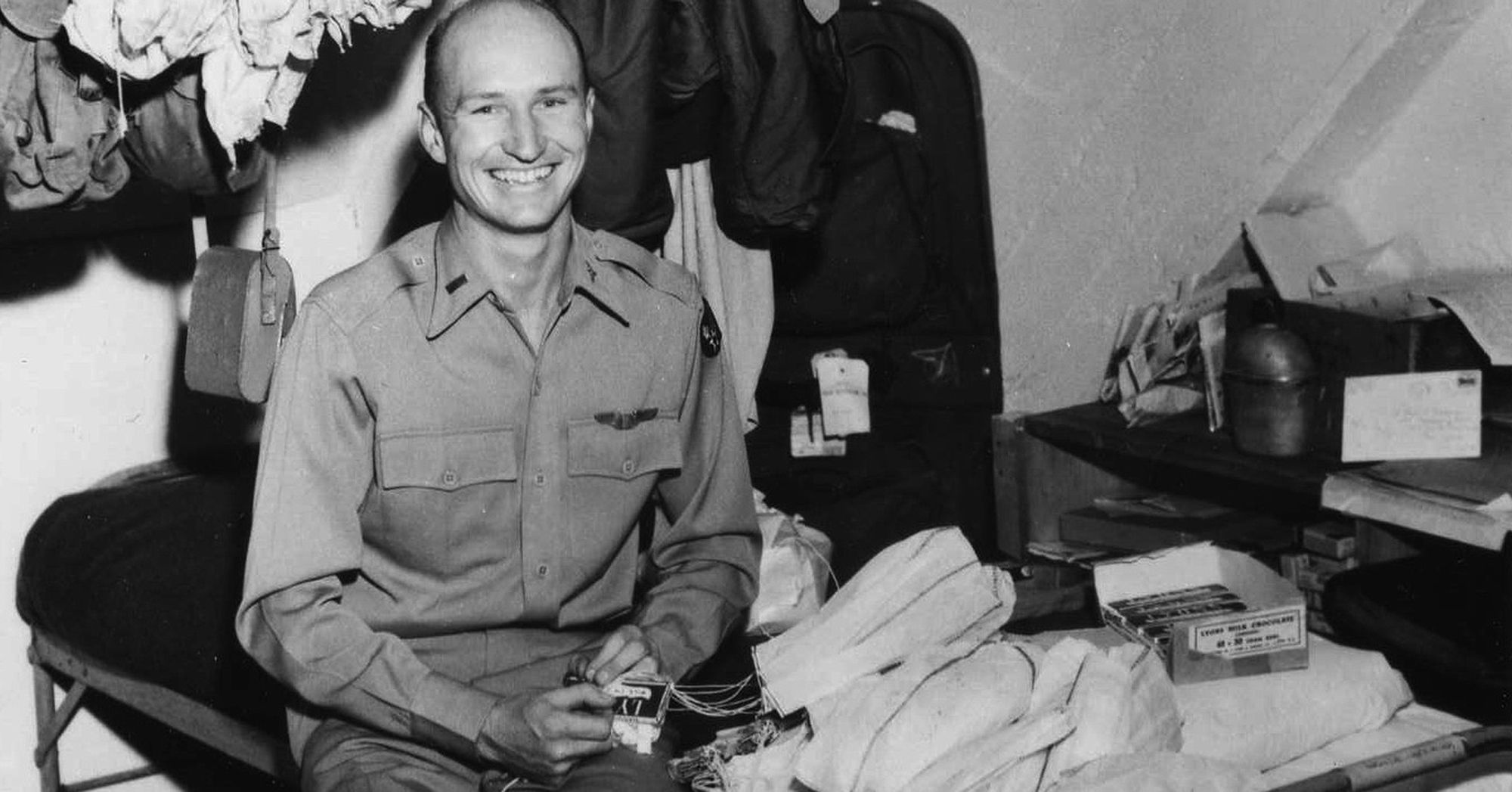 “Some people’s lives are like a feather in the wind, carried from breeze to breeze, buffeted by events. Others travel a steady path they lay out for themselves, or one that fate or family bequeaths to them. But then there are others for whom their entire life comes down to a single instant that makes sense of all that occurred before and shapes everything that happens after.”—Andrei Cherny, The Candy Bombers

Gail Seymour Halvorsen’s single instant was a chance encounter with a gaggle of German kids playing on a pile of rubble outside the fence of Berlin’s Tempelhof Airport in the summer of 1948. What would follow later may have very well turned on the bad head cold he was suffering.

You’ll know Halvorsen as the celebrated Candy Bomber of the Berlin Airlift, the historic first skirmish of the Cold War that’s only dimly remembered by many. Halvorsen died this week at the age of 101 still, no doubt, capable of the 1000-watt smile that launched him to important but short-lived fame.

Halvorsen was an unlikely player on the world stage, having grown up as a farm kid in Utah. He entered the war late and toiled anonymously as a transport pilot ferrying cargo across the Atlantic from Brazil to Africa. At war’s end, he was enticed to remain in what became the U.S. Air Force with the promise of free college tuition. His commanding officer once told Halvorsen that he was picked over others to fly the then-new C-54 not because he was the best pilot, but because he had a reputation for following orders.

So it was out of character when, on his very first flight of the airlift, Halvorsen took an unauthorized jeep tour of Berlin outside the airport fence. In June of 1948, in a bid to drive the Allies out of Berlin, the Soviets had blockaded the land routes into the city, causing Harry Truman to draw a bright moral line: The U.S. would sustain Berlin, a city of 2 million, with an airlift. It was an absurd proposition.

Halvorsen was drafted into the effort and he, along with hundreds of other pilots, got to Rhein-Main Airbase in July of 1948. That much is familiar, but as detailed in Andrei Cherny’s The Candy Bombers: The Untold Story of the Berlin Airlift and America’s Finest Hour, it was the timing of his arrival that would assure his place in history. The airlift had originally been commanded by a reluctant Gen. Curtis LeMay who promptly made a hash of it. Weeks later, Gen. William Tunner—he of the famous Hump airlift over the Himalayas—took charge and, eventually, honed it into the efficient conveyor of cargo that it became. But if Harry Truman and Berlin’s military governor, Gen. Lucius Clay, saw the confrontation with the Soviets in sharp moral relief, the American public did not necessarily share the vision. And it was an election year. Halvorsen and Tunner would intersect to change that.

Like every other GI, Halvorsen had gum in his pockets and split up a couple of sticks amongst the kids outside the fence, promising to bring more on his next flight. But how? And how, asked the kids, would they know his airplane? He promised to waggle his wings when he flew the dicey final over the apartment building into Tempelhof. That’s where the head cold came in. Before his rushed departure from Brookley Field in Mobile, Alabama, Halvorsen tossed every handkerchief he owned into his duffel bag and now he fashioned the little white squares into parachutes. Scrap twine attached the candy and gum, which he bought on his ration card at the base exchange. His crew was unenthusiastic, fearing a rug dance in their future.

They were right. By the third drop, Halvorsen’s rogue air operation drew hundreds of thank you notes to base ops from German children and local press notice. The Candy Bomber was busted and was soon summoned to Tunner’s office for a little chat. Fearing a court martial, Halvorsen was relieved to learn that Tunner understood something Curtis LeMay, James Forrestal and even George Marshall did not: The airlift represented a new kind of war and public relations and optics were more important than bullets and bombs.

Tunner encouraged Halvorsen to talk to the press and the skinny, prematurely balding 28-year-old lieutenant was a natural. Self-effacing, but humorous and confident, Halvorsen knew exactly what the reporters wanted and he gave it to them. Off the cuff, he called the candy drops Operation Little Vittles, after the Operation Vittles of the airlift itself. The story had legs and his act put a human face on the dreary work of flying coal, milk, flour and a thousand other things into a city that needed 8 million pounds a day just to survive. In September of 1948, Tunner sent Halvorsen back to the U.S. for a press tour, warning him not to get a big head about it.

Halvorsen appeared on a new program in a new medium called television. As Cherny reports, his scripted interview on “We The People” was a sensation and almost overnight, the airlift became a popular cause among the electorate. Americans viewed themselves as a kind and generous people and Halvorsen proved to them that they were. Then as now and especially in an election year, everything becomes politicized. But Republican presidential candidate Thomas Dewey found little traction in his attacks on Truman’s oversight of the airlift, although it was assumed Dewey still had a lock on the White House. It may be a reach to say Halvorsen’s Operation Little Vittles revived Truman’s fortunes, but it’s fair to say he inadvertently had a hand in that famous photo of a grinning Truman holding a newspaper headline declaring Dewey the winner.

Moreover, the candy drops had an incalculable positive effect on the morale of Berliners. It gave them hope that the U.S. was committed to resisting Russian aggression and that their privations, which went on for years, would eventually see an end. More than any other single act, the Berlin Airlift soothed the enmity between two bitter enemies and it, along with the Marshall Plan, cemented the post-war peace that, improbably—or maybe inevitably—the Russians are once again threatening, this time in Ukraine.

As the summer of 1948 wore on into the difficult flying months of the fall and winter, the airlift became an exhausting slog. Although Tunner had refined it for maximum efficiency, crews were falling asleep on the flight decks. At Tempelhof, ground marshallers carried fishing poles to rattle on the windows to wake slumbering pilots awaiting takeoff. More than one crew woke up over France on the return flight, having snoozed past their Rhein-Main arrival. Still, the candy drop went on. Inevitably, there were even regulations for the parachutes. They were to be 15-inch squares of light cloth with four 16-inch-long strings for shrouds.

The airlift eventually had 225 C-54s, but only 48 were ever in the air at once, according to Cherny. In the spring of 1949, Tunner organized what he called the Easter Parade. In a single day, 26 million pounds were flown into Berlin in 1398 flights—nearly one a minute. A Russian controller in the four-party control tower bolted down the stairs, saying the airplanes were coming too fast.

The Soviets ended the blockade on May 12, 1949, but the airlift continued through September to build Berlin’s stockpiles. It ended with 277,000 flights and 4.6 billion pounds of cargo. Against the fear of another blockade, Berliners stashed 132 million pounds of wheat, 52 million pounds of canned meat and 15 million pounds of butter, among other supplies. When the Soviet Union collapsed in 1991 and store shelves were bare, Berlin offered to send the surplus it had in warehouses. “The only trouble is,” The New York Times reported, “they don’t know how to deliver it.”

After the airlift, Halvorsen returned to fly the C-74 and remained in the military for 30 years. He retired as a Colonel. His famous gesture was soon forgotten in the U.S. But not in Berlin. When he returned for the 50th anniversary in 1998, he arrived in a C-54. Those kids—now in their 50s and 60s—lined up to shake his hand and pay their respects. One produced a handkerchief parachute and asked his forgiveness for not returning it, as the label directed.

It’s natural to think of Gail Seymour Halvorsen’s promise to those kids that July day in 1948 as an act of great patriotism. Maybe. But I think it an act of great humanity, which is a far more lasting legacy.

In addition to Cherney’s excellent history, I can also recommend Richard Reeves’ Daring Young Men: The Heroism and Triumph of the Berlin Airlift.