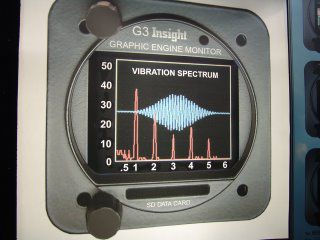 From time to time, we’ll feature posts and commentary from our sister magazine Kitplanes. If building is your thing, do yourself a favor and check out the Kitplanes blog – and be sure to visit their web site.

A buddy intercepted me on the flight line, and said there was this new engine monitor on display that you could use to balance your prop. After I got my brain to accept this concept, I went to find out myself, and ended up at the Insight Instrument Corporation booth.The Graphic Engine Monitor (GEM) has been around for almost 30 years now, and most of us have become at least passingly familiar with its operation and uses. But according to John Youngquist, inventor of the GEM line of monitors, just measuring CHTs and EGTs is no longer enough. Enter the new G3, which takes engine monitors to a whole new level.Along with engine temperatures, the new G3 displays and records engine vibration level, fuel flow, manifold pressure, oil temp and pressure, takeoff G forces, turbulence levels in both vertical and yaw axis, and even has a diagnostic to measure the resistance of each individual lead of each temperature probe. Oh, yes, one more thing: It now features a color display.

The source for many of this expanded functionality is a small silver box that contains an accelerometer and fuel flow transducer and mounts to the spine of the engine. This allows the G3 to measure and record G forces and vibration, which are then duly displayed and recorded (along with the rest of the engine parameters) on a front-mounted, garden variety SD chip.If you’re wondering why you’d ever need this much info while in flight, consider being able to troubleshoot a faulty probe to confirm that out-of-limit indications are indeed valid. And being able to accurately measure and record an out-of-balance prop under the full range of flight conditions is huge compared to the data available from a ground run-up.Those who have rental aircraft have always wanted to know just how their planes are being flown by renter pilots, and now they can instantly look at the flight data from a particular flight by just popping the data card into a SD card reader. Suspect aerobatics in a non-aerobatic airplane? Or a hard landing? Or excessive G loadings? The G3 will let you know, and no additional software is necessary.

The full six-cylinder model of the G3 lists for $3200 (including probes), and the four-cylinder version is several hundred less. If you already have a GEM 602, 603 or 610 installation, the G3 will simply drop in using the old connector. However, a few new wires under the cowl will be required for fuel flow and accelerometer functions if these are to be added.More information can be found at Insight Avionics.