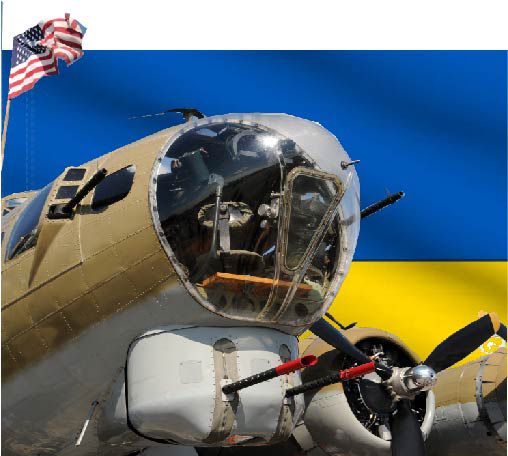 It’s spring here at 41 degrees north latitude, when, as Alfred Lord Tennyson (1809-92) mooned, “a young man’s fancy lightly turns to thoughts of love.” And with apologies to Lord T, I’ll add, “an old pilot’s fancy turns to thoughts of cutting tailwheel furrows in soft verdant earth.” Flight and the lusty quest thereof comprise the stuff of true aerial love, frequently inconvenienced by circumstance. You may quote me.

Oh, how I miss aviation’s raw pleasures without the attending guilt of daring to enjoy flight while a Russian dork rains Guernica-style wrath upon Ukraine. And yes, wars exist elsewhere, but Blue and Yellow gleans the most YouTube likes. It wasn’t always this way.

July 1988. Four Soviet citizens, touring the United States as part of a Glasnost Peace Walk, accidentally visited our small Iowa airport (6Z6). Their handler mistook the airfield for the fairgrounds where a kumbaya barbecue was scheduled, featuring reporters and camera-mugging politicians. Always alert for airport security violations, we pilots met the threat, surrounded the invaders, and stuffed each into Champs, Cubs, and Cessnas to fly them until sunset by which time, one guy from Leningrad was ready to solo, having mastered the phrase, “Right rudder, right rudder…” With detente achieved, the Cold War ended, not with a bang but with beer and brats, thanks to citizen action at a small American airport (Sousa music up). True story. Don’t Google it; CIA gave all credit to Reagan, who wasn’t even a pilot, could barely play one on screen.

But guilt intensifies as Ukraine repels our former Russian guests, and I, like Scarlett O’Hara in her 1861 spring of discontent, block unpleasantness with, “War, war, war. This war talk is spoiling the fun at every party this spring.” Selfishly I fly and wonder how general aviation will gavotte through summer’s gaieties. Is it time for gloom or to fly as before and whistle past freshly turned graveyards?

“War,” as Carl von Clausewitz (1780-1831) said, “is simply the continuation of political intercourse with the addition of other means.” Cold but quotable, which Ukrainians did when they told a Russian warship to go intercourse itself. By the 20th Century those other means inevitably embraced aviation, and today, safely distanced from incoming ordnance, we admire restored warbirds at airshows. I’ve previously gushed over First World War biplanes, specifically the SPAD XIII, and turn now to the Great War’s sequel, which produced a gallery of celebrities. Mustang, Hurricane—which I find more fetching than the glitzier Spitfire—plus Lightning, Corsair, Yak-3, Fiat G.50 Freccia, Grumman cats from Hell, and Mitsubishi’s lethal ballerina, the A6M Zero or Zeke to those who know her best. Splendid machines to the peacetime eye, none of which I’ll ever fly. While that accidentally rhymes, engineers weren’t composing poetry but, instead, producing aircraft for combat and not for Midwest fly-ins, 90 years hence. Luckily, that’s where we find them to admire and reflect.

Topping my list of World War II favorites is the Boeing B-17, an icon of 1930s design that effortlessly blends airframe symmetry with bodacious curves and four round engines to walk into any party. It’s pure art, especially once the E-model strutted runways with an enlarged vertical stabilizer proclaiming, “baby got back.” Its coquettish nose lures suitors with upturned insouciance. The 17’s Plexiglasy smile becomes slightly marred when the G and some F models added Bendix chin turrets, housing twin 50-caliber machine guns, reminders that this airplane wasn’t conceived for Oshkosh beauty pageants.

Compounding its allure, the B-17 is a swaggering taildragger, like the German’s four-engine Focke-Wulf FW-200 Condor, but unlike the boxier, if more capable, tricycle-gear Consolidated B-24. The Liberator, for all its muscle, impressive production numbers (18,500) and combat record, never achieved the Hollywood glam of the Flying Fortress, due in part to “Twelve O’Clock High,” a TV show (1964-67) that Quinn Martin spun from the 1949 movie with Gregory Peck, based on the novel by Sy Bartlett and Beirne Lay Jr.

I enjoy the movie but prefer the earlier television episodes with scenery-and-butt-chewing General Frank Savage (Robert Lansing) instead of the doughy Captain, later Colonel, Joe Gallagher (Paul Burke). Technical liberties might irritate purists. To their credit, Savage’s crew donned oxygen masks above 10,000 feet but quickly ditched them at lower altitudes so as not to interfere with smoking the sponsor’s cigarettes after ravaging stock footage FW-190s.

Lesser-known films outside hangar movie fandom is Steve McQueen as Captain “Buzz” Rickson (great name) in “The War Lover” (1962), a grittier look at B-17s on the job and pilots’ off-duty missions in British boudoirs.  I’ve never flown a B-17, been to war, or experienced Allied hospitality to the level these fictitious crews did, so I limit comment on authenticity. As a 10-year-old viewer, though, I loved the airplanes but couldn’t grasp what price B-17 beauty claimed in human casualties.

Graphic horror didn’t sell Chevies in the 1960s as well as gauzy makeovers of war. A tip of the marketing cap goes to the studio exec on a series about bombing the snot out of Germany, who courted Volkswagen to sponsor “Twelve O’Clock High.” Imagine that pitch: “OK, in this episode the 918th blasts the Klosenshaven U-boat pens, but as the smoke clears, what is revealed…? Yes, a Volkswagen floating unscathed!”

Today, yet another war showcasing aviation’s evolving role dominates screen time. Like passing a car wreck, I know it’s improper to stare but do. I’m unfamiliar with modern warbirds, don’t know a Sukhoi from a Subaru, except that whenever advanced aircraft go up, a comparably impressive weapon takes it down. UAVs (Unmanned Aerial Vehicles) play greater roles; inspired by Hollywood, which tends to overuse them as camera platforms.

There’s little doubting the importance of drones, but I’ll never find affection for their shape and whine, even though their purpose mimics classic warbirds. FedEx eVTOLs can’t upstage the 442nd Troop Carrier Group’s C-47s over France, Holland, and the Rhine. Nor will I find emotional connection with Space Force, whatever that is and however necessary it’s deemed.

Perhaps, as I lounge in the grass beside my airplane companion of 40 years after a purposeless spring flight during which no one tried to kill us, I’m willfully ignoring the deranged nature of this latest war, of all wars, far from where my tailwheel has cut s-curved furrows. Maybe that’s privileged hypocrisy while whistling past another graveyard. Don’t know, but I’ve whistled before.

Spring 1975, while stationed in Hawaii (tough duty), I passed my private pilot check ride. Six thousand miles away, Saigon fell, and Huey helicopters evacuated refugees who didn’t care about my achievement. Hueys were ubiquitous in Vietnam and unceremoniously dumped into the South China Sea when the curtain came down. Four years later, Francis Ford Coppola matched Wagner’s “Ride of the Valkyries” with rented Hueys to make them movie stars. Reality took another holiday with nostalgia, and “Fiddle dee,” I don’t whistle at the many graveyards that pass below.