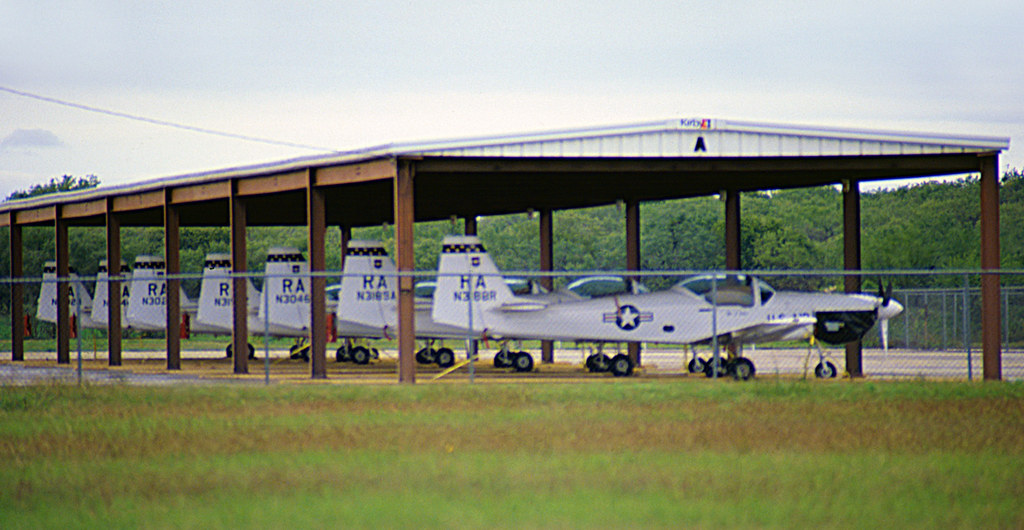 Hondo, Texas, is on the edge of the Texas Hill Country about 40 miles due west of San Antonio. This time of year, it bakes under a summer sun that reliably drives the highs to more than 100 degrees. It’s not a place for delicate constitutions.

I was in Hondo last week for reasons I’ll get to in a moment, but today’s news story on the Air Force’s latest pilot screening program using Pipistrel Alpha trainers reminded me of an earlier similar program that turned into an expensive disaster of the sort that only the military industrial complex can create.

The last time I was in Hondo—it was in 1998—the Air Force had a fleet of brand new Slingsby T3A Fireflies rotting in the summer sun, save for the shelter of minimal shade hangars. And there they sat—some with close to zero hours—until the Air Force declared them surplus and crushed them like so much scrap plastic.

The story is long and contorted, but the short version is that the Air Force wanted to screen zero-time would-be pilots by subjecting them to vomit-inducing aerobatic rides, the theory being that washing them out early would be more efficient than washing them out later. Using mostly civilian contractors, they got the vomit part right, but the screening was of dubious value.

In selecting the T3A, the Air Force wanted a cheap, off-the-shelf design so it went with a variant of Slingsby’s T67M Firefly, which the U.K. had used successfully as a primary pilot trainer. The T3A was to replace the T41 Mescalero—the military version of the Cessna 172. In short order, however, the T3A developed a reputation as a pilot killer, with nasty spin characteristics. In two years, three Air Force cadets and three instructors were killed in T3A accidents and at Hondo, a Firefly was damaged in a landing accident.

Spooked by these developments, the Air Force ended the screening program and grounded the airplanes until they were crushed—all $32 million worth—in 2006. Interestingly, when the Edwards test pilot school evaluated the T3A’s spin characteristics, the report found no significant issues with spins, stalls or any other part of the T3A’s envelope. It was pointed out that the Air Force instructors killed in the crashes were big airplane guys, not fighter pilots or light airplane drivers. However good or bad military flight training was then, it may have done little better than civil training to sensitize pilots to stalls and spins.

Shortly after the Firefly fiasco, the Air Force bought a small fleet of Diamond DA40s and redesigned the screening program. Continuing the circle and as described in this story, the Air Force has again hired a contractor to screen would-be Air Force pilots to solo, this time in an ultra-cheap-to-fly Pipistrel Alpha. Appropriately, it’s being done at storied Tuskegee, Alabama.

Meanwhile, like one of those old Soviet photos retouched to dematerialize the out-of-favor apparatchik, there’s little evidence at Hondo of the Firefly’s sad demise.

While I was at Hondo visiting Texas Aircraft last week, it occurred to me that you could make the argument that, despite the blundering hand of man, airplanes are inexorably getting better. That’s even true, I think, in the relatively stagnant performance envelope of light sport airplanes. After all, there’s only so much you can do with 100 HP and a 1320-pound weight limit.

Before plunging onward, a short concessionary: While the blundering hand of man has been mostly contained by the constraining glove of statistical systems analysis and computer-aided design, in the 737 MAX, no lesser a light than Boeing has shown us that blunder on a galactic scale is still possible, if not probable.

With that tidied up, back to the Hondo narrative. I was in town to fly Texas Aircraft’s new Colt LSA. I’ll have a detailed review and video later, but for now, the Colt is a new design from well-known Brazilian aircraft builder Caio Jordao. The company will be officially launching at AirVenture next week.

Because LSAs are all designed to the same formula, comparing them is sometimes like evaluating socks. What color do you want and over the calf or low cut? When flying these airplanes, I like to see how well the designer did with the airplane’s longitudinal stability. Real-world test pilots have a formal process for doing this, but my back-of-the-envelope method is to do a pitch displacement in one direction—sometimes called a singlet—and release the stick to see what the airplane does.

You know what it’s supposed to do. The pitch cycles through the phugoid oscillation before settling back to whatever trimmed airspeed it started at. That’s positive static stability and Part 23, which ASTM-approved airplanes are supposed to generally follow, lists this as a desirable trait. I am often surprised when the demo pilot in the right seat is either nervous about this benign exercise or professes to never having seen it done.

The Colt turns out to be aggressively damped. From a nose-up displacement, it was back to the trimmed speed in one cycle, something I’ve seen in all of the recent LSAs I’ve flown, although the  recovery period varies. Ten years ago, it wasn’t necessarily so. Several LSAs I tried were neutrally stable—displace the stick and nose stayed where you put it.

On one flight trial, I pointed the nose 15 degrees low and released the stick. We were aggressively heading for redline airspeed with not a hint that the nose would recover. That’s not good design, in my view, and could be due to manufacturing/maintenance issues as well. Also, the Colt doesn’t suffer from the feather light control forces so many LSAs have. It feels more like a Cessna 150. And that’s good.

It may be anecdotal, but I don’t think it’s an accident that I’m seeing fewer airplanes with undesirable handing. With nearly 15 years of experience, LSA designers have learned a few things both about what the market wants and how to deliver better products. I think they have better tools available, too, including sophisticated instrumentation that’s cheaper than ever, inexpensive rapid prototyping, CAD-CAM tools like SOLIDWORKS and affordable numerical control equipment on the shop side.

I wouldn’t call it a revolution as much as an evolution in the right direction. In the decades ahead, as distributed electric propulsion gains eventual traction, those tools will only evolve further and then things will get really interesting.