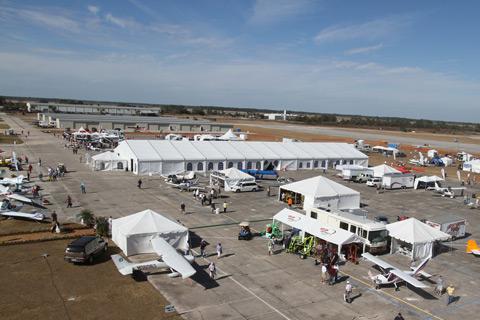 If concrete could emote, several dozen acres of it in Sebring, Florida, must be sighing in relief. Now that the U.S. Sport Aviation Expo has passed into history, there’s no further need to perforate that historical ramp with expansion bolts for temporary tiedowns.

Given the sparse attendance at this show, you could argue that its demise was inevitable, but I don’t agree. The Expo sustained for 15 years, a run that merits the Sebring Airport Authority and the city itself a respectful salute for hanging in against difficult market realities. Bystanders can carp about lack of promotion, thin exhibitor attendance and Sebring’s relative remoteness, but I don’t agree with any of that either. I think the city and show organizers, plus the on-field businesses, did well enough in supporting the show and if they could have done much more to affect the outcome, I just don’t see it.

The Expo’s retirement is a reflection of the light sport aircraft industry itself. Sales of these airplanes are modest at best, growth is elusive and the segment just never potentiated the way many of us hoped it would. The notion that the light sport rule would unleash torrents of low-cost, market-resetting airplanes persists and is the basis for the claim by some that light sport has been a failure.

That’s wrong, too. When I was in Slovenia last month visiting Pipistrel’s new factory across the border in Italy, I saw a modern facility with three active assembly lines. They’re building more than 200 airplanes a year, a handful of them electric. A few other factories are doing the same. Small production volumes don’t equate with failure. In aviation, we’re saddled with the memory of 1978, when 17,000-plus GA airplanes were built in an era when the village plumber could afford one. With that distorted benchmark of success, anything less is somehow unworthy.

A precise count of the light sport population in the U.S. has been difficult to come by, but my informed guess is about 3000 or about 200 airplanes a year since the rule emerged. Add in the rest of the world, and I’m sure it’s double that. Clearly, we’re not darkening the skies with light sport—or their world equivalent—airplanes. It’s a boutique market and likely to stay that way. So what? If companies can carve a profitable niche in this tiny little pond, we should all cheer.

In the world we all wish for, this would be sufficient to support an annual trade show like Sebring’s Expo. Sadly, it was not. That leaves the recently established Sport Aviation Showcase in Deland still standing. When it launched in 2016, I doubted the industry could support two shows, when the existing event was already struggling. Now we’ll find out.

When the Deland show opened, I canvassed exhibitors and heard two consistent complaints about Sebring: The January weather and the nearby racetrack. Until I moved here, I never realized how crappy the weather can be in Florida in January. The cold fronts that sweep through the northeast bring snow and wind, but here it’s rain and cold wind, which is precisely what people come to Florida to escape. It seemed every year, Sebring would get a gale sufficient to knock down tents, soak the grounds and keep people in their hotel rooms for at least a day.

For as much as I like loud engine noise, Sebring International Raceway’s proximity to the Expo grounds was an irritant. Every time I’d hear a car screaming out of a corner with an engine stumble, I’d want to rush over and urge the mechanics to adjust the fueling or something.

The Deland Showcase date is in mid-November when the weather in Florida is far more benign. Hurricane risk is lower, but the temperatures are more pleasant with fewer cold front gales. Show organizer Jana Filip told me the date could be moved to January, but I’m not sure I’d favor that or if it would even make a difference. January brings more visitors to Florida in general, but who can say if that would impact show attendance?

Neither of these shows proved a draw for people just gawking airplanes, but companies exhibiting often told me they had specific appointments with potential buyers and that made the expense and time of the show worth it.

If that’s enough to sustain the Deland Showcase, we should all be happy about it. If not, so be it. Either way, thanks to Sebring for a worthy effort.

Note to readers: As we debug our new platform, we’re tweaking the comment section to include reader names. Standby.