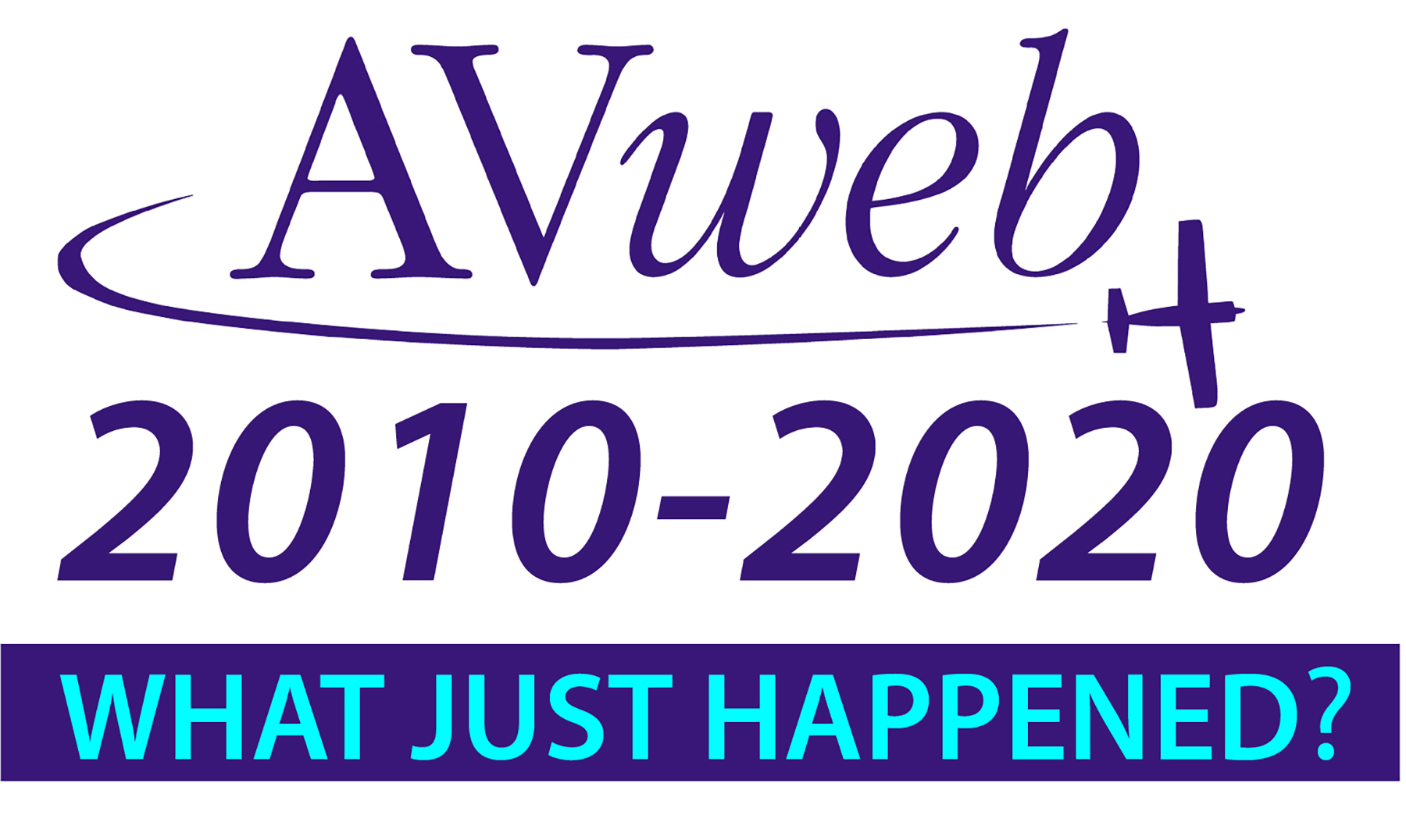 This is a chicken-egg thing. I don’t know whether people like to tie things up in 10-year bundles because they like bundles or we do that in the press because some long-dead editor proposed it and we could never stop. Or because some of us work on New Year’s day.

Nonetheless, as the decade closes, and a new one is afoot, I’m noting some general aviation milestones. Technically, I’m 364 days early, because the decade doesn’t officially end until December 31, 2020.

Here then, placed in order of actual and potential impact, is my list of general aviation milestones for the past decade.

Chinese cash infusion: This is more important than many are willing to admit. Without Chinese capital, Cirrus may have withered, Continental wouldn’t be getting a new factory and Mooney would have faltered, although it did anyway. For reasons mostly related to insufficient return on investment, western capital gave many of these companies a pass. That Chinese money did not has been a plus for U.S. GA so far. Prediction: Don’t be surprised to see some of these companies come back to U.S. ownership.

Basic Med: Another one I thought I’d never see. Eliminating the Third-Class medical requirement has knocked down a worrisome barrier for many would-be pilots and brought back quite a few into the fold. While I don’t think it’s the game changer some people claim, Basic Med is still a significant step forward.

Prediction: Driver’s license certification will be a reality for pilots flying other than for-hire by 2030.

Autoland: This one sneaks in just under the deadline, having been announced just two months ago. Its short-term significance is trivial, because it’s unlikely to find much use in the seldom-needed emergency backup role for an incapacitated pilot. It will be a nice sales lever for the airplanes that have it available, such as the Cirrus VisionJet, the Piper M600 SLS and, soon, the TBM.

The larger impact is in the distance because autoland portends autonomous flight and that’s the next major evolutionary step. It’s not that the industry—Garmin—has done it, but that it made the commitment to do it. Prediction: The market will clamor for routine-use autoland.

Simulators: In the airline and bizjet worlds, simulators have been standard equipment for decades. It’s getting that way in light general aviation and it bodes well for better, more effective and less expensive training. Airplanes have always been terrible classrooms and now even the smallest flight schools can afford capable simulators. Prediction: More competition and ever more sophisticated visuals and displays plus a major breakthrough in feedback and fidelity.

Affordable avionics: This is one I never would have predicted. But in 2016, when EAA approached Dynon about approvals in certified aircraft for its D10 electronic gyro, the FAA got on board. That unleashed the hounds and before long, Garmin was investing in approvals for its own line of experimental avionics—including autopilots—and developing new products to fill the pipeline. Judging by what we’re pretty sure is coming, the process continues. Prediction: Five years hence, both avionics and airframe approval will follow ASTM-style consensus standards.

ADS-B: You knew I had to mention it and midway on the list seems appropriate. Forced into buying what they did not want and insisted they couldn’t afford, many owners have come to loathe the very idea of ADS-B. But for not that much investment, it returns real benefits in datalinked weather and traffic information, something that was a pipe dream two decades ago. Prediction: Equipage rates will continue to increase, but the FAA’s NextGen will be mired in delays and performance shortfalls.

Tablets and apps: Early in the decade, when tablet apps first appeared, we sniped “some cool apps, but mostly hype.” By now, however, tablets have evolutionized the way some pilots fly, blurring what used to be lines between preflight planning, flight management and navigation. For many pilots, lack of a tablet is a no-go. Tablet technology seems to have plateaued so the next development may be price breaks.

Prediction: Through cellphone and onboard networks, apps will become ever more integrated with the airplane, especially new aircraft. But aftermarket hardware and apps will update even older airplanes.

Diesel engines: This milestone applies mostly to one company: Diamond Aircraft. Through vision and sheer determination, Diamond has a full line of predominantly diesel aircraft powered by the exceptionally smooth Austro engines. Judging by my recent visit to the company’s London, Ontario plant, sales are strong.

Predication: Diesel will remain a one-trick pony ridden by Diamond.

Cirrus VisionJet: This airplane merits special mention because of what it represents: Survivor status of a would-be swarm of airplanes called very light jets. But the VisionJet is the only aircraft that truly fits the definition and as we’ve noted in our coverage, this airplane uniquely matches the requirements of its customers, while remaining accessible for a reasonably skilled pilot to fly safely.

Prediction: Before 2025, two competitors in the small VLJ class will emerge. Cirrus will introduce a new engine option.

Electric airplanes: As a market presence, electric airplanes have still failed to launch. Battery limitations are only part of it. The airplanes remain minimally capable and are quite expensive to build, but attractively cheap to operate. So far, only one company, Slovenia-based Pipistrel, has anything approaching volume you could call market share.

But the technology continues to improve and the much-discussed urban air mobility idea will generate breakthroughs, even if the market itself doesn’t gel quite the way Uber thinks.

Prediction: By 2030, electric airplanes will be a major player in the training fleet and some commercial electrics will be in service. But gasoline engines will still rule.

Worthy of mention are some also-rans. Although not a huge seller, CubCrafter’s XCub is the ultimate iteration of the rag-and-tube taildragger. It’s luxuriously appointed and if a pleasanter flying taildragger exists, I haven’t seen it.

Three safety items of note. Angle-of-attack indicators, TKS and synthetic vision. None of these are new to the last decade, but all three have become more widely fielded. Of the three, TKS may be the most potent safety enhancer. It’s effective and practical and owners who have it swear by it. While I like AoA, I remain skeptical that it’s been properly ingrained into training doctrine to have had much effect.

Two more honorable mentions apply to the powerplant development field, which is, due to weak demand and the cost of certification, somewhat moribund. Nonetheless, Rotax has stepped up with two engines, the 912 iS and the 915 iS. Both are state-of-the-art FADEC-driven engines that are finding buyers in the light sport market. Lycoming quietly continued work on the IE2 electronic engine and it’s now entering service in the Tecnam 2012 Traveler commuter aircraft. Engine progress is slow, but it’s not invisible.

Misfires? I can think of a few. Mooney’s attractive M10 trainer failed to ignite after the company put a sharp pencil on market potential. Cessna killed both the high-performance TTx and the hapless Skycatcher, after neither got much love from the marketing department. The decade also saw Cessna announce then cancel two diesel projects, one for the 172 and one for the 182.

BendixKing struggled to compete with Garmin not just in the past decade, but the one before it, too, culminating in the demise of the KSN 770. If I do more than mention NavWorx, I’ll provoke too much collective heartburn so … I won’t.