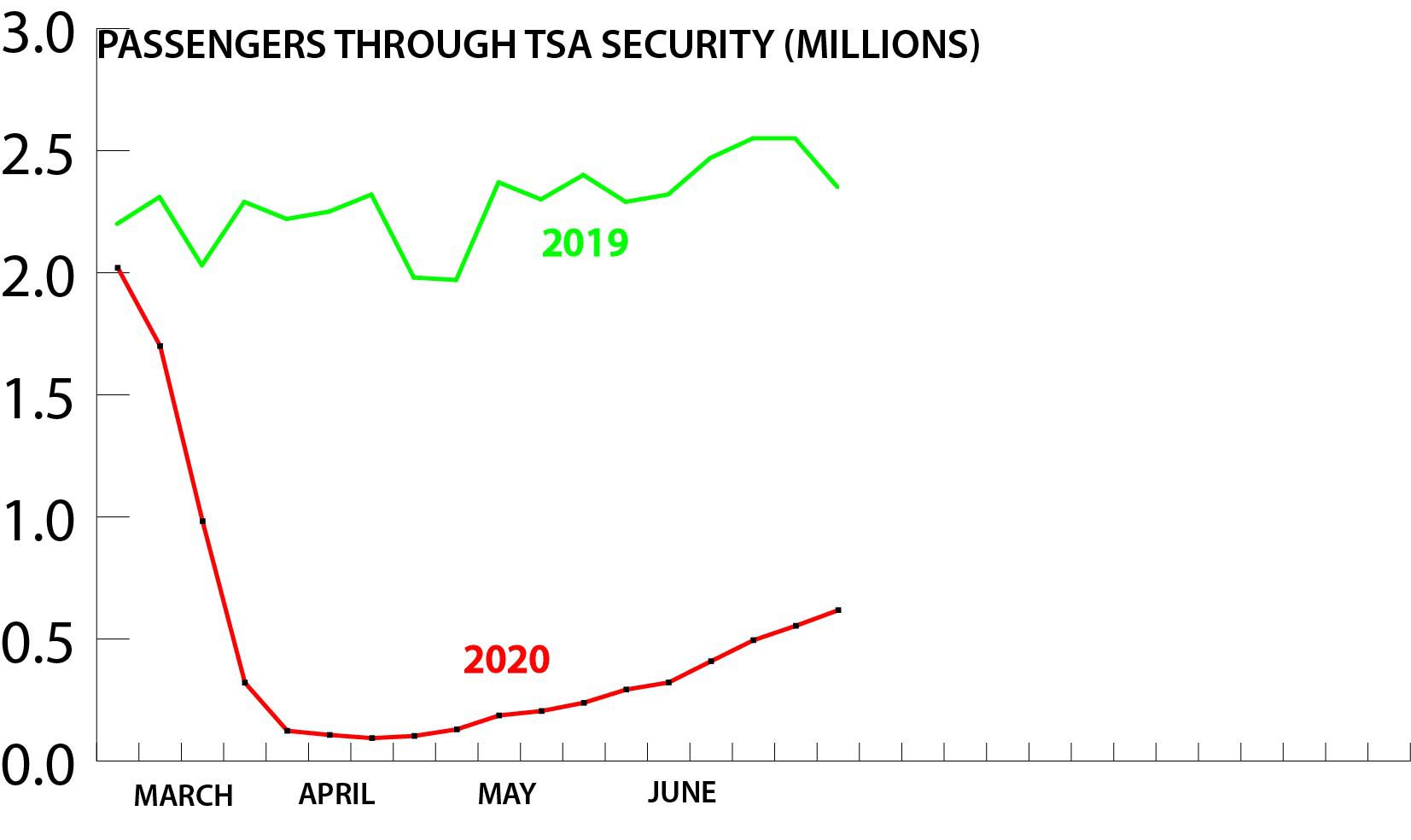 I learned a valuable lesson last week. My dentist called and asked if I wanted to schedule a routine cleaning. There was a long pause while I considered that offer. I was recalling an article I read that described the COVID-19 risk of various professions. The scatterplot showed that dentists were nearly off-scale high. But I accepted the offer, figuring the hygienist would have the personal protective equipment all squared away.

She didn’t. She appeared with a vented N95 mask—an industrial model with the outflow valve that spews the wearer’s breath back into the air. When I queried, she professed unfamiliarity and said this was the mask they had been given. I declined the cleaning and as I walked out the door, it dawned on me that people who should know about this stuff may know less than I do and the only advocate for me is me.

I wonder if airline passengers are making a similar calculation. The chart here shows four months of COVID-impacted airline travel and the data is dismal. Those are weekly averages of passengers through TSA checkpoints. The volume fell off a cliff in early March, but the worst week of all was in mid-April, when the average daily take dropped below 100,000.

That’s just 4 percent of what it was during the same week in 2019. In our wildest fever dreams, I don’t think anyone would have predicted such a thing would be possible. It is an utter almost overnight obliteration of an entire industry. And it wasn’t due to stay-at-home orders because these were applied unevenly and there was no such national order. This reaction was purely fear driven. People looked at the numbers and the news and fled from airports and airliners in droves.

It’s pointless to argue whether the fear was justified—I think it was not—but consider instead what the airlines are going to do about it. The passenger volume is slowly trickling back, with the latest data showing volume has recovered steadily since about early May. It’s now about 25 percent compared to the same period last year. If this is good news, it’s good news in the way that a train wreck is not so bad if only one train is involved.

American and United have decided to test their customers’ resolve by announcing that distancing is over and they’re packing airplanes again. Masks are supposedly required, but an American captain told me skippers are given a list of things to do when a passenger refuses; throwing the person off the airplane isn’t on it. In other words, if you insist, masks are optional. This is good to know going in in order not to book American if you deem masks important. It makes me wonder if American will by design become the airline of the mask-nots; people who see no benefit in masks and are resentful about being asked to wear them. (Recent polling shows that almost 90 percent of people are using masks, up from 69 percent in mid-April.)

The airlines are trying to change the subject by showing how diligently they clean their cabins. For United, it’s United CleanPlus provided by Clorox. Even I will admit this is slightly reassuring, but it’s ultimately a sleight of hand. You can walk onto a sterilized airplane and be seated next to sneezy Sam in sardine-can seat pitch and be in far more jeopardy than from bacteria hiding on the tray table.

Anyone who’s paying attention knows that increasingly, virologists are finding that fomites (surfaces) are a minor infection path. Exhaled droplets and aerosols are the real worry and the physical distancing that airliner cabins simply can’t provide is the best defense against that, with masks as a distant second. The airlines may be catching on to this, too. I saw an in-depth story on how cabin air is cleaned through HEPA filters in the air packs. JetBlue did a short video on it. All good stuff, of course, but still ignores that a person coughing or sneezing nearby represents some level of unknown risk and it overlooks the crowd on the jet bridge, in the boarding area and when deplaning.

Business travelers have always been a big profit center for the airlines because such travelers don’t shop on price and are less likely to postpone or cancel trips. They aren’t fickle like the Stooldrears taking the kids to Disney. They also aren’t coming back in nearly the volume the airlines want. A survey in April by Global Business Travel Association found members had canceled or suspended 92 percent of domestic business travel. Some of these travelers will inevitably come back, but my guess is it will be a long time before they recover to 2019 volumes, if they ever do.

Consider that a medium to large business will have liability worries over ordering employees to travel when the risks are simply unknown. They could just as well be trivial as substantial. We have too little data to make a judgment. I don’t see much reporting on infections traced to airplanes but no news is not necessarily good news. An announcement from Delta last week said 500 employees were diagnosed with COVID-19 and 10 died. Delta didn’t say if any or all were flightcrew or office staff. Hawaiian Airlines just announced 14 flight attendants have contracted COVID, but it appears to have been related to training, not flight operations.

When considering such stories as a means of assessing risk, there’s a natural tendency to think things looks bad. But let’s insert some perspective. Such reports have to be considered in the larger context of infection rates among the entire universe. Delta, for instance, has nearly 90,000 employees. Five hundred is a half percent of that. Without all the data, we’re as blind as the bats that caused this disaster.

I also wonder if airline travel deemed too risky will cause structural changes in the business economy. We’re all tired of Zoom conferences, but they get the job done and if businesses realize they’re 90 percent as good as physical travel at zero cost, they make think twice about returning to high volumes of expensive business travel.

AVweb readers are in tune with the general public on returning to airline flying. A recent poll we conducted found that 23 percent already have flown, but nearly as many—21 percent—said give it a year and 36 percent said no chance for now. More than half of the general public is unwilling to fly now, according to polls.

I’m not sure what more the airlines can do to restore confidence. But I’m pretty sure filling the airplanes up is not gonna do it. Personally, I hunger for accurate, timely data on transportation-related infection trends. This seems as impossible to get as a $5 haircut. Or any haircut.