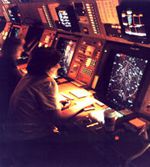 You could almost hear the sigh in the approach controller’s voice as he called the VFR Piper for the third time. “Cherokee Six Papa Kilo (not the real callsign), how do you hear?” The response, in a Georgie Tirebiter falsetto: “Was that for Six Papa Kilo?”

It’s been decades since I’ve issued air traffic control instructions, but whenever I’m loitering on an ATC frequency, I instinctively form an evolving 3-D image of the controller’s traffic. Radar bolsters situational awareness inside the controller’s head, but without that mind movie, radar is just, per Edward R. Murrow, “a box with lights.” He was referring to television but similar concept.

On this day, the controller was moderately busy, snaking airline departures through IFR arrivals; two requested practice approaches requiring more attention than, “Cleared visual approach …” Like a former ball player relegated to the bleachers, I wondered if, despite the expanding time warp since my last government paycheck, I could slip unnoticed into the radar room and pick up where I’d left off in 1997. The terse Hemingwayesque reply for this old man in the sky was: Perhaps, but many would die.

Skills don’t hone themselves because ego wills it so, but unable to set back the clock, I appreciated the sterling job the radar controller was doing. This was reinforced when he told Six Papa Kilo, “traffic two o’clock, five miles …”

So, he repeated with an updated “three miles.”

As targets must’ve merged, he added, “altitude indicates (same as yours, Buster!)” but still no response. Finally, the controller’s voice extruded a frustrated, “How do you hear?” Then, when the pilot replied in sleepwalking innocence, “Was that for Six Papa Kilo?” the controller answered, “Why do I bother?”

He really said “traffic no factor” and showed immense restraint by not firing an ATC Stemwinder Missile that pierces a nonresponsive pilot’s thought-canceling headset and bonks him/her with a cartoon boxing glove labeled, Listen Up!  (ATC secret; don’t share.)

This comm story should’ve died there, but more traffic calls went unanswered. I guess some pilots assume that upon hearing “radar contact,” a forcefield enshrouds the aircraft, and Obi-Wan FAA protects the flight until “radar service terminated” unleashes the muted aviator onto CTAF to blather useless position reports with the excitement of a six-year-old after consuming eight Twinkies with a Red Bull chaser.

I admired the controller who never lost his cool. ATC’s primary tool is voice. Pilots talk to one controller, while ATC engages everyone on the frequency. Layers of cyber wizardry convey a sense of modernity, but largely, it’s 1957 as one human talks while another listens before responding. The Cherokee pilot violated that primal ATC/pilot audio bond and should be denied services for at least a fortnight, yet another fantasy that won’t come true.

But this might. Earlier I mentioned a time warp, so let’s do the time warp again and consider Daylight Saving Time (DST). I’m writing this after cashing in the daylight I’d saved since spring, plunging me headlong into Midwest winter of discontent. Adjusting clocks merely gives the illusion of change. And I’m not alone in discontent. Famed 1930s aviation passenger Will Rogers once remarked to Charles Dudley Warner, “Everyone complains about Daylight Saving Time, but no one does anything about it.”

Consider the privately owned Village Oaks Airpark (60IA), located north of the Mississippi River in eastern Iowa. Here, the river swings east to west to confuse fliers like me utilizing the lost art of pilotage for primary navigation, and it might be this alluvion quirk that clouds time in the minds of pilots who refuse to submit to time’s pretensions. According to AirNav, 60IA “does not observe DST (Daylight Saving Time).” A bold stance, reminiscent of when Marlon Brando in “The Wild One” (1953) was asked, “What are you rebelling against?” and he famously mumbled, “Whaddya got … other than Daylight Saving Time?”

I was an airport kid when President Johnson signed the Uniform Time Act into law to “promote the observance of a uniform system of time throughout the United States.” Pilots, being rebels often without causes, revolted by stubbornly clinging to Universal Time Coordinated (UTC), aka Zulu Time, named for the 1964 film “Zulu,” in which the British Empire’s finest thespians came to near grief defending Greenwich Mean Time (GMT). *

Some missions, though, are doomed from inception, and forcing pilots to comply with mandated time parameters is one. Therefore, I would say, “Bully!” to the atemporal rebels at 60IA for defying LBJ’s clock-watching police, except deeper research disclosed the defiant posture to be a typo. DST still applies. Wars have been declared for less, but for an instant I believed in, and longed to inhabit, this bastion of DST-deniers, but revolution would have to wait.

Meanwhile, to the uncommunicative Cherokee pilot I say, you shall remain anonymous but not alone. Fifty years ago, age 18, I was standing “at ease” in formation with 200 other trainees on a sunny, cold day at Fort Dix, NJ. Basic training was—probably still is—an incomprehensible rush of commanding voices with frightening consequences for those who screwed up; comparison to first impressions of ATC is apt but misleading. As with air traffic control, I learned to block out the Army noise but didn’t remain vigilant for threats.

Out of nowhere, a drill sergeant the size of a deuce-and-a-half leaned his smokey-the-bear hat into my face and screamed something about my birth legitimacy and imminent death if I didn’t—and I’m paraphrasing—“Listen up!” Apparently, in my “at ease” mindset, watching a C-141 Starlifter descend overhead for nearby McGuire AFB, the company had been called to “attention.” I’d missed that call and stood out like an unresponsive Cherokee in a skyful of attentive radar targets. Of course, controllers are not drill sergeants there to intimidate. Controllers exist to help by separating those who pay attention from … well, daydreamers like me.

* Too many facts to footnote