Home AVWeb Insider Trade-A-Plane: It Told Us We Could All Do This
Print
Email
Facebook
Twitter
Linkedin 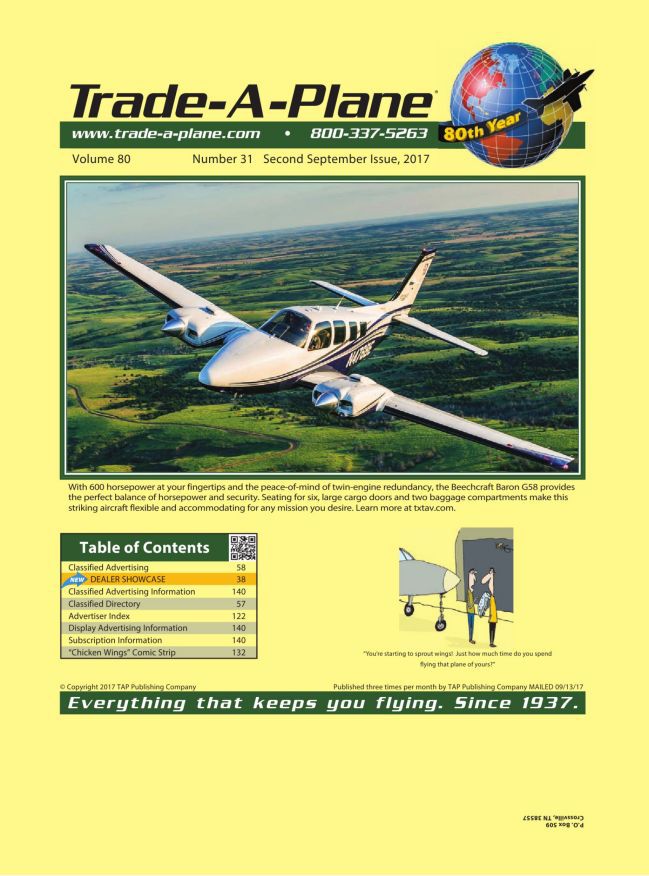 The smell of Varsol—a petroleum-based solvent that’s essentially paint thinner—all but makes me nostalgically woozy. It’s cheaper than drugs and probably healthier, too. It’s the smell I remember when I walked through the pressroom every morning at my first newspaper job. A decade later, when I became a magazine editor, the job changed but the smell of printing didn’t. The pressmen use Varsol to clean the rollers and plates between runs.

Maybe if we just hang on for a few more years, this digital thing will blow over and we’ll return to the wondrous roar of a multi-gang press in full throat. Sure, and maybe slide rules and the Narco Omnigator will emerge from the crypt, too. Obviously, neither is going to happen which is why the news of Trade-A-Plane ending its print edition has such a sad finality. Cue the predictable blather about the end of an era.

But it is the end of an era and not having that thick yellow tabloid to spread out on the kitchen table with a cup of coffee diminishes the world. If the face of Helen launched a thousand ships, Trade-A-Plane must have certainly launched thousands of aviation careers, not to mention hundreds of thousands of happy airplane buyers and maybe no-so-happy sellers.

I’m pretty sure it launched mine, because Trade-A-Plane is my earliest memory of a publication that conveyed this message: Yeah, you can do this. My memory of the details is hazy, but I think I first encountered TAP in the office where I worked at Fort Bragg, probably brought in by the battalion XO, who was an Army aviator. Seeing me browse it, he said something like, “You know, you can do this.” He revealed the existence of the Fort Bragg Flying Club where I’m sure I found yet more issues of Trade-A-Plane in the dilapidated shack that served as a clubhouse.

Trade-A-Plane’s unique position in the aviation universe was due partly to timing and, as is so often true of startup businesses, partly to a market gap between established players picking the easy fruit. Cosby Harrison started it in 1937 and it soon flowered because he discovered—and ignited—a market of thousands of disparate buyers and sellers with no outlet for their commercial interests.

Like the daily newspaper upon which it was loosely modeled, Trade-A-Plane had a place for every advertiser, from manufacturers selling new airplanes to a private owner trying to sell a surplus heater muff for a post-war Cub. And that unrestricted range is what made Trade-A-Plane more than just an ordinary shopper.

It never had any editorial, other than the cover photo and the cartoon. But the astonishing variety and number of ads made TAP a reliable indicator of the aviation economy and a bellwether for what was new, what people were buying and what market trends were lurking beneath the surface that the slick aviation magazines hadn’t noticed yet.

Once a month, I’d page through Trade-A-Plane to sense the trends on used aircraft sales. That’s where I first noticed there were good buys to be found in used Cessna 172s equipped with the early G1000s and where the same trends dumped a lot of perfectly serviceable GNS 430s on the market at bargain prices until owners—probably reading TAP—noticed the same thing and started snapping them up.

Trade-A-Plane was one-stop shopping for what was going on in the maintenance shops along Tulsa’s Sheridan Road. Those businesses remain intensely competitive and even as down-in-the-weeds as we get at AVweb, we wouldn’t necessarily have noticed market shifts that Trade-A-Plane would telegraph through its advertising. That’s how I found out that the refurbished cylinder market was exploding due to price hikes by Lycoming and Continental. And that a company called Superior was building its own cylinders.

The advent of digital publishing has proven disruptive but in slow motion. Industry wide, revenue from digital has increased over print at a glacial pace and for some publications, it hasn’t at all. The advertising market has just become less concentrated and more diverse, impacted heavily by Google and Amazon.

I have an indelible soft spot for print, but I’m hardly a Luddite about it. I no longer read print books because I always like to carry something to read and that’s an e-reader. I get most of my news from digital sources, for the timeliness and the convenience.

But Trade-A-Plane was and is different. Spreading that tabloid out on the desk allowed you to browse and both find things you were looking for and discover things you weren’t. That changes with the digital-only version and is further impacted by there being no deliverable. Gone is the three-times a month paper arriving in your inbox. While many businesses have found a home in digital-only advertising and its evil cousin, social media, I wonder how many have not and how the demise of TAP’s paper will impact them. Also, the company used to hand out free issues at the major shows, stuffed into a brand-touting yellow shopping bag. I thought that was brilliant promotion and I will miss it. We all will.

I’ll go all schmaltzy romantic here for a sentence and concede the dream-sheet quality of Trade-A-Plane. You could always peruse those classifieds and wonder, if only. Then, before you know it, you’ve written a big check and if only has become, I did it. TAP proved that, yeah, you could do this. And many of us did.

But like it or not, we’re moving on. The march of time and the progress that goes with it is relentless. My only hope is that the local Ace Hardware can still order Varsol.