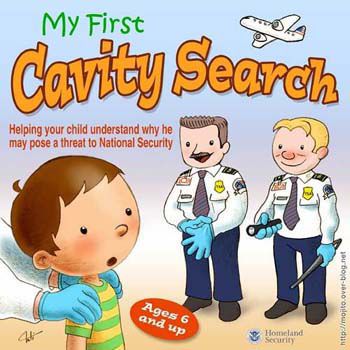 TSA now boasts that it has its controversial full body scanners in every major U.S. airport, which it seems to think is quite the accomplishment.Unfortunately, as Homeland Security Secretary Janet Napolitano tours the country trying to sell this turd of an idea, she’s navigating a PR disaster. But she’s not giving ground, insisting that the scanners are safe, necessary and asking for the public to “be patient.” That’s government speak for “drop dead if you don’t like it.” If I’m patient while a stranger is fondling my private parts, will I eventually get used to it?With no effort on my part, my inbox has filled with quite a few messages on this topic and several Web sites have blossomed in support of an organized protest. The general gist of these is that the searches may or may not be violations of the Fourth Amendment, but they are in any case, abusive, intrusive, ineffective and unnecessary. In principle, the courts have supported such searches under administrative search doctrine. But they have not yet reviewed the scanner/aggressive pat down procedures in detail. Moreover, did you know that if you refuse the scanner and the pat down and decide not to fly, you are subject to civil penalties? If that’s not government overreach, I don’t know what is. There are cases headed for the docket.Apart from the absurdity of the security argument, Napolitano has claimed two things that I predict will prove her undoing. First, that the radiation exposure from the scanners is too low to be a worry and second that the images are deleted after viewing. Because people in government have a tendency to say things to soothe the masses that bear no resemblance to reality, I’ll bet there’s a study out there somewhere raising real questions about radiation exposure, TSA will be shown to be aware of it and it will eventually surface. Two airline unions have already advised their pilots to avoid the scanners for this reason.

Although TSA claims the imagery is deleted after viewing, somewhere, somehow a collection of these images is going to make it onto the Web, the result of some fun-loving TSA employees not having gotten the memo. This embarrassment will come at some politically inopportune time. That’s just the way things seem to work in the modern world. And just to show how wacky and crazy those TSA guys and gals really are, Gizmodo reported that the image shown here was used as a screen saver on a TSA computer in Indianapolis. Cute.What do about this? A recent poll by CBS news revealed that 80 percent of respondents support the scanner idea, 15 percent don’t. I suspect the 15 percent are the ones actually doing most of the traveling. Some of those 80 percenters may change their minds after getting groped. But if you like the direction TSA is going, you can send a fan letter toTSA here. A number of Web sites have been erected to challenge TSA. This one proposes an on-airport protest movement. The ACLU is organizing court challenges on privacy and Fourth Amendment grounds. (Full disclosure: I sent them a contribution in support of the cause.) Two other organizations, The Association of Airline Passenger Rights and Flyers Rights, are also active in this area.Another group wants a contribution to organize a FedEx-delivered letter campaign to every member of the new Congress. I find this site a little too far out there for my sensibilities, but you can take it for what it’s worth. They have the right idea, which is to convince Congress to establish limits on what TSA can do. They could find fertile ground in the Tea Party crowd.And by the way, what would you do if you were in charge of TSA? The comment section is open. I would yank or limit the scanners and eliminate the wide use of pat downs. I’d keep the current baggage scanners and metal detectors and use them to set a threshold for probable cause that would be a gateway for an interview, as El Al now does with every passenger. It has proven successful. This would allow TSA to stop treating us all as common criminals.None of this guarantees that an airliner won’t be blown up. Nothing will do that. As a civilization, we just have to accept that. But I think the tradeoff is worth not being abused every time you fly, since the abuse isn’t effective security anyway.P.M. addition: Two hours after I posted this blog, this story broke, proving that while not everyone in government is an idiot, there are enough of them out there to make even modest predictions come true.