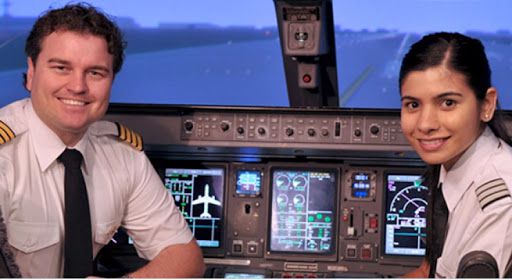 I kind of got it when I was looking for photos to accompany last Monday’s story on an FAA committee’s recommendation that the agency adopt gender-neutral terminology for its reams of printed and digital material, trading terms like airman for aviator, cockpit for flight deck and unmanned for drone.

As a relatively privileged white male, I admit that I’m prone to eye glazing on such issues. I’m sympathetic enough to the cause to be empathetic to those fighting the fight, but we view the world through a lens shaped by personal experience and I simply haven’t experienced prejudice, sexism or social injustice. That likely means that I am guilty, hopefully unwittingly, of perpetrating those things against others but it sure doesn’t mean that I condone, or worse, support it. But it does mean that I really (I mean really) don’t care what they call the place with the flight controls or what we call the people trained to manipulate those controls.

At the same time, I don’t see a communist hiding behind every thesaurus at FAA HQ as the agency decides what to do with the recommendations of the committee, which was co-chaired by AOPA President Mark Baker. So even though I’m more exposed to the issue than most by virtue of this job, I didn’t think I had any skin in the game so I didn’t spend much time thinking about it unless I was being paid to think about it.

The committee’s rationale for recommending the rewrite is as pragmatic as it is socially responsible. It’s not firebrand stuff. We simply need to get together on how to describe an industry that was once accurately depicted by the words and terms but is no longer. It seems ironic to me that the marginal gains in gender equality in aviation in recent years are now used as justification by those who puzzlingly oppose the wording changes. The logic is that since there have been some successes in diversifying the aviation workforce, we no longer need to work at it and that doing so is somehow offensive.

For years, I’ve gone about my business in a blissful state of limbo between these oddly adversarial forces. My attitude defined ambivalence but I hope not intolerance. That changed a bit on Sunday evening as I hunted down a photo to illustrate the rather dry and bureaucracy-heavy story. I thought it would be nice to have a photo with a male and female pilot in the flight deck and with the female in the left seat. There were hundreds of photos of male-female flight decks but not one with a female captain and male FO. The only pictures of female captains had female FOs, often mother-daughter teams and publicity photos for all-female crews. I ended up going with an embarrassingly cliché man-woman pilot pic that I’ve also included with this blog.

I found it glaring and illuminating at the same time. Some of those involved in trying to make flight decks more inclusive have taken the view that the reason women are so underrepresented in aviation is that the overwhelming public perception of aviation is that it’s dominated by men. Women, despite what we men say, don’t feel welcome. Many men argue that there is nothing stopping women from becoming pilots, mechanics, engineers and whatever else they want to be, but a woman looking around at career opportunities couldn’t miss the testosterone levels in most workplaces.

We can finger point and say that women should just suck it up and get past that vague discomfort. Indeed, thousands have done so but many also have war stories from the battle of the sexes. So we can waste energy debating what is and what isn’t a waste of time or we can see if making some changes might help. Taking all the male bias out of the regs and correspondence at the agency that has influence over every aspect of the industry seems like a reasonable thing to do in that context.