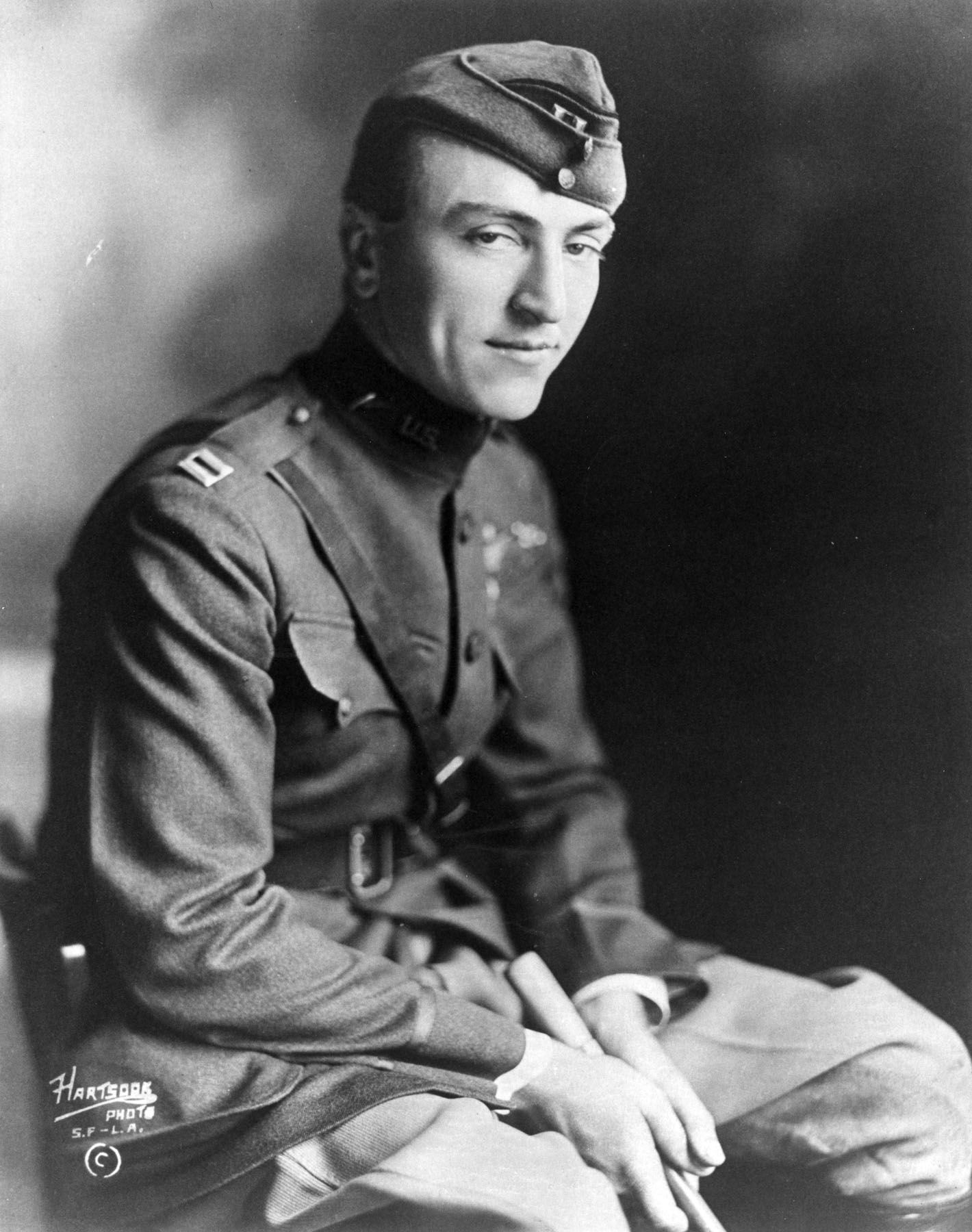 The photo hanging above the old Victrola, old even for 1960, always intrigued me. Born illiterate and having made little effort to remedy that, I couldn’t read the inscription, but being six, I decided this man in the picture, wearing a military aviator’s uniform and an I’ve-seen-some-crazy-crap smirk, was my hero. I’d walked past that picture in my grandfather’s house countless times, but on this day the movers were clearing out memories, making this a poignant moment, even though I’d yet to learn the word.

My grandfather, Joe Berge, had died, and as my Uncle Mart lifted the picture from its hook, leaving a faint rectangular ghost on the wallpaper, I asked, “Who is that?” My uncle replied without disturbing the White Owl cigar permanently clenched in his teeth, “Eddie Rickenbacker. Captain Eddie. America’s top ace during the First World War. Won the Medal of Honor. Your granddad knew him,” and he read the inscription: “To Joe—from Your Friend, Captain Eddie,” then packed America’s ace of aces into a crate and loaded into a 56 Plymouth wagon, there like a hearse to remove my thin connection to this aviation legend.

Edward Vernon Rickenbacker, distant cousin to Adolph Rickenbacker of Rickenbacker guitar fame, is why I think the 1918 SPAD XIII is the most beautiful single-engine airplane ever made. I suspect I’ve ruffled Nieuport and Spitfire feathers and probably shouldn’t let my Aeronca Champ, an aerial companion for 40 years, learn that I harbor a crush on a much older airplane.

SPAD is an acronym for Société Pour L’Aviation et ses Dérivés or Société de Production des Aéroplanes Deperdussin. Confused? So were French investors when company founder, Armond Deperdussin, a silk merchant eager to sell boatloads of fabric to the growing aviation market, was charged with fraud in 1913. With his name expunged from company stationary all agreed to call a SPAD a SPAD.

Back to aeromantic lust. Who could view two wings, a slender fuselage with an adorable pug nose around a Hispano-Suiza V-8, and oh-so-francais tail feathers waving from saucy repose in the grass, and think of the SPAD as merely a machine? The military, perhaps since this beauty’s primary mission was to haul machine guns aloft so 20-year-olds on paths of glory could blast hell out of other sky knights in Fokkers. All because some teenager in 1914 shot an Austrian Archduke in Bosnia, back when Eddie Rickenbacker was a 24-year-old race car driver who’d never flown and might’ve been hard-pressed to find Sarajevo on a map.

But the duke was dead. Millions would die avenging fancy costumed Habsburgs, while aviation went from Farman biplanes over Brooklands, U.K., to seriously beautiful creations of increasing utility and lethality. And Rickenbacker became America’s top fighter ace, leading to postwar celebrity and eventually president and part owner of Eastern Airlines. Yeah, it’s as dead as the Archduke, but in its day was as prestigious as TWA, Pan Am, Braniff … Lesson being that nothing lasts forever. Except my memory of Captain Eddie’s portrait.

Rickenbacker parlayed his prewar racing fame and wartime hero status into postwar marketing success and some failure. During World War II, he barely survived both a DC-3 crash in Georgia and 24 days on a raft after ditching in a B-17 in the Pacific. The latter inspired the best seller, “Seven Came Through,” which included tips for preparing seabird sushi. And, oh yeah, he even started a car company: The Rickenbacker Motor Company.

With visions of being the next Edsel Ford, entrepreneurs in the 1920s stampeded into the automobile industry; like high-tech firms in the 1990s with many failing just as ingloriously. WebVan anyone? Captain Eddie was a hot commodity with solid motorhead credentials, so it was natural to link the racecar driver turned fighter pilot to automobiles. He recruited a squadron of engineers to determine where all the bolts and hoses should go, and that’s where Joe Berge came in. An engineer, he’d worked in the early auto industry and held a string of patents that are completely worthless today. Dang. His specialty was instrumentation, speedometers and such, and Rickenbacker cars needed gauges.

More than a pretty face on promotional material, Eddie Rickenbacker embraced the technology of building his car, and Joe spent enough hours with him to glean the signed portrait when his contract expired. The Rickenbacker debuted to some acclaim in 1921 and six years later went the way of the Hupmobile. The what? Find an old $10 bill from 1928 to 2006. The square car on the reverse parked in front of the Treasury building is commonly identified as a Hupmobile but could be a Model A Ford. Personally, I believe a Ford Trimotor would’ve been more appropriate.

Rickenbacker died in 1973, still a hero. Joe Berge died in 1960, a hero to me, unknown to most. Later, I saw my Uncle Mart at a family reunion. He was a pilot and I asked if he had the Captain Eddie portrait. “Yeah, in my garage,” he answered past what I’d swear was the same cigar from decades earlier. “You want it? I’ll send it to you.” Before it could reach the post office, though, Mart died.

More years passed, and I asked Mart’s son if he knew of the portrait. “Yeah,” he answered, sounding remarkably like is father. “It’s in my shed in California. You want it?”

I should’ve immediately flown to Los Angeles to claim it, but as with others who’ve touched the jinxed portrait, my cousin died. Estate pickers carted his household junk away. He had no heirs, no siblings, no one I could pester about that Captain Eddie Rickenbacker image, autographed for my grandfather. It’s gone. Perhaps burned like Rosebud in an incinerator. Or, and I can only hope, it’s on a Flabob, California, hangar wall, the owner still proud of the two-dollar purchase from an estate auction and clueless who Rickenbacker’s friend, Joe, was. If so, I’m willing to pay up to $10 to get it back in the family.