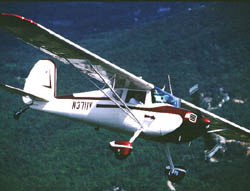 The FAA has turned down a request by the International Cessna 120/140 Association to allow certain modified versions of the singles to be flown under the rules governing light sport aircraft (LSA). The popular taildraggers, in normal configuration, have a gross weight of 1450 pounds, 130 pounds heavier than the maximum of 1320 pounds allowed under LSA designation. It’s the only limitation they don’t naturally meet. A couple of years ago, the owners group applied for, and received, a Supplementary Type Certificate that would allow owners to reduce the gross weight to 1320 pounds in hopes that the FAA would then allow the aircraft to be flown by those with Sport Pilot certificates, which have much less stringent medical requirements. The FAA saw it another way, however, according to a report in Sport Pilot magazine. Earlier this month, the agency rejected the owners group’s logic that since the planes have such a good safety record they should be natural candidates for LSA status. The FAA countered that the safety record is due, in large part, to the training and skill required of pilots who fly certified aircraft. The agency also said the STC application backfired on the owners because it led to the inclusion of a clause in the LSA final rule that prohibits modification of existing designs to meet LSA limitations. In the end, the FAA determined that lightened-up 120s and 140s simply don’t qualify. “Granting the petitioner’s request would not be consistent with the intent of the rule,” the FAA said. Several types of certified aircraft do qualify as LSAs, however, including certain Aeroncas, Cubs, Taylorcrafts and Ercoupes.

Find all of today’s stories in AVweb‘s: NewsWire