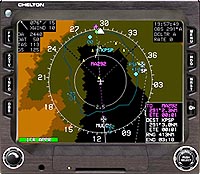 When Direct To Avionics (D2A) closed its doors last month, buyers who had paid up front for Chelton Flight Systems avionics they never received were left hanging. This week, Chelton released a statement saying it will help out those customers by offering replacement Chelton and Pinpoint Inertial components at prices significantly below their own manufacturing cost: $10,300 for a dual Integrated Display Units (IDU) and a single Pinpoint Inertial ADAHRS/GADAHRS system, or $4,000 for a Pinpoint Inertial ADAHRS/GADAHRS. Chelton’s statement also says that all orders it had received from D2A before it closed were fulfilled, although some D2A customers reportedly paid for, but did not receive, all or part of the products ordered. “Chelton Flight Systems will continue to sell its synthetic vision components into the experimental market through existing Chelton dealers,” the statement says, and will also continue to provide customer technical support and warranty service to all existing dealers and aircraft builders. For more details about Chelton’s discount offer, go to their Web site.

Chelton Vice President of Sales Bruce Bunevich told AVweb on Tuesday that the company doesn’t yet know for sure just how many customers have been affected. “We are in active contact with our dealers; each of the individuals who have contacted Chelton Flight Systems has been requested to contact their Chelton Experimental Dealer,” he said. To help deal with the situation, the company has named Greg Schmidt, who was Chelton’s Western region sales manager, as sales manager for experimentals. Schmidt has built several experimental aircraft, currently flies his own experimental aircraft, is a licensed A&P mechanic and is an instrument-rated flight instructor.