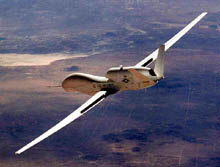 The FAA and the Air Force have reached a preliminary agreement on procedures that would allow unmanned aerial vehicles (UAVs) to be deployed in civilian airspace during emergencies, InsideDefense.com reported last week. “If a national disaster is declared, we will be able to use unmanned aerial systems such as Predator and Global Hawk over a disaster area,” said Maj. Gen. Scott Mayes. The UAVs would likely be used to provide real-time images and data to first responders and relief efforts. The FAA has softened its stand that UAVs must have “see and avoid” capability before being allowed to share the civilian airspace, according to Inside Defense. The military said that during a disaster, the airspace would probably be closed to commercial traffic anyway, lessening the chance of a collision. However, during the aftermath of Katrina last year, the skies were buzzing with helicopters and relief flights, so how that separation will be maintained was not clear. UAVs were tested during recent emergency drills conducted by the military, and that performance helped to get the FAA on board, according to Inside Defense. Meanwhile, however, Congress has shown some concern about the deployment of the aircraft on the Mexican border. A disbursement of $6.8 million for the Border Patrol to buy another UAV in fiscal 2007 is on hold until the agency reports findings of an investigation into the crash of a Predator near the border in April, govexec.com reported last Friday.