GA deliveries are down … surprise, surprise. The General Aviation Manufacturers Association (GAMA) reports that shipments of general aviation airplanes manufactured throughout the world totaled 1,766 units in the first nine months of 2002, down 16.6 percent from last year’s same-period number. The total dollar value of those airplanes was $8.4 billion. Shipments of airplanes manufactured just in the United States have fallen 16.9 percent this year to 1,551 units. The total dollar value of U.S.-manufactured airplanes was $6.4 billion. “These numbers reflect the reality of a weak economy not just in the U.S. but around the world,” said GAMA President and CEO Ed Bolen.

Breaking down the shipments by category, total piston-engine airplane shipments this year are down 13.4 percent to 1,099 units. Business-jet shipments saw a similar decrease and totaled 497 units in the first nine months of 2002, down 12.0 percent from the 565 units delivered during the same period last year. Total turboprop shipments took a beating, dropping from 284 units in the first three-quarters of last year to 170 units this year.

…And Cessna Trying To Drum Up Business…

With the news about lower delivery numbers, it is not surprising to hear of manufacturers coming up with new ways to bring in new business. Case in point: Cessna Aircraft Company is now offering zero-percent interest for 12 months on 2002 Skylanes and Turbo Skylanes purchased between now and December 31, 2002. “We are introducing this program to help stimulate the single-engine market,” disclosed Mark Patterson, Cessna Director of Single-Engine Sales. “Although we have begun to see some encouraging signs of economic growth in our sales, we are confident that the financial savings our customers will receive with this new program will make it economically attractive for some to purchase a new aircraft this year,” he added. Cessna will celebrate the delivery of the 5000th single-engine aircraft in 2003. 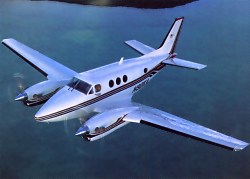 Not all is bad in the industry, as Raytheon reported some positive figures last quarter. The company reported an improved third quarter with higher sales and operating income than a year ago. Aircraft deliveries totaled 64 in the third quarter, down from 73 a year ago. They were nine Hawkers, three Premier I’s, four Beechjets, 16 King Airs, three 1900D commuter aircraft, 16 piston-engine airplanes and 13 T-6A trainers. Although the number of aircraft delivered in the third quarter declined, Raytheon said its results reflected more deliveries of higher-priced aircraft and higher sales of used aircraft. “We have been successful in reducing costs and improving operating efficiencies, particularly at Raytheon Aircraft, in response to a weak and increasingly competitive commercial environment,” Raytheon Co. Chairman and Chief Executive Daniel Burnham said in a statement. However, with its successes this year, Raytheon projects it will deliver fewer planes next year. Unfortunately, that could translate into a loss of jobs. Raytheon Aircraft President Jim Schuster said the company is still assessing the situation and has made no decisions on future employment. “We will let our employees know first the minute any important decision is made,” Schuster said in a statement.