Just Reach Out And Touch It? 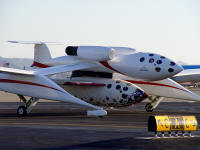 Make space for EAA AirVenture on your calendar if you want to touch a real spaceship. EAA and Scaled Composites are promising unprecedented access to SpaceShipOne and its mother ship White Knight as the Ansari X-Prize winning combination settles in for the full week of the annual convention in Oshkosh starting July 25. “We want the public to be able to come up and touch it,” said Mike Melvill, who became the world’s first private astronaut in SpaceShipOne last year. Melvill said it will not only be the first such opportunity, it will be the last. “It will be the first, only and last appearance,” he said in a teleconference held with reporters Wednesday. There appear to be tentative plans to fly the aircraft directly to Washington, D.C., where they’ll go on permanent display at the Air and Space Museum, but EAA President Tom Poberezny said those plans haven’t been worked out yet. And although the Scaled team made getting into space look easy, getting the two aircraft from their home base in Mojave, Calif., to Oshkosh is a logistical challenge. Melvill said the relatively short-legged White Knight will make at least two refueling stops (Albuquerque and Tulsa look like the favorites) but they’ll need start carts to get the old T-38 engines that power the mother ship started.