Both Engines Out In CRJ? 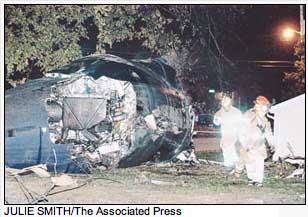 They almost made it. Pilots of a Pinnacle Airlines CRJ2 apparently glided their powerless regional jet for 20 minutes and almost 100 miles before it crashed two miles short of the Jefferson City, Mo., airport late Thursday. Now, the NTSB is trying to figure out why both engines apparently stopped, possibly while the plane was at cruise. The plane was on a repositioning flight from Little Rock, Ark., to Minneapolis. Only the pilots, Captain Jesse Rhodes, of Palm Harbor, Fla., and First Officer Peter Cesarz, of Helotes, Texas, were on board when the regional jet went down in a residential area of the city, narrowly missing several houses. Both pilots were killed but no one on the ground was hurt. NTSB spokeswoman Carol Carmody said flight data recorder information showed the plane was at 41,000 feet, about 100 miles south of Jefferson City, at 9:51 p.m. Four minutes later, both engines quit. Other reports suggest one engine quit at cruise and the other during the emergency descent. The plane crashed at 10:15 p.m. Carmody said 41,000 feet is the maximum altitude for the CRJ2 and told reporters that exceeding that altitude could cause engine failure. She also said there was no clear indication of the cause of engine stoppage and investigators don’t know why the plane was flying so high. “That’s the most interesting thing,” she said. Carmody said the plane had been pulled from a scheduled flight earlier Thursday when an indicator light went on for its bleed air system. Unspecified maintenance was performed before the plane took off later that evening.