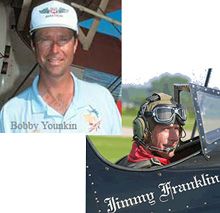 A complex maneuver that required accurate timing and at least some visual contact between the pilots for safe execution lacked both and resulted in the deaths of two of the air show world’s most respected pilots last July. The Canadian Transportation Safety Board says that Jimmy Franklin and Bobby Younkin didn’t have a clear idea of where each other was right up until the moment their two biplanes collided belly first at an air show in Moose Jaw, Sask. The board’s final report says the Masters of Disaster aerobatic team, which also included Jim LeRoy, executed a modified version of a maneuver called the Dairy Turn, which not only introduced two potential points of collision, it also made it possible for them to lose visual contact just before the cross was to occur. Franklin’s jet-powered Waco and Younkin’s Wolf-Samson collided in a ball of fire near show center near the end of the Saskatchewan Air Show. Because the maneuver was designed so that the aircraft’s energy was directed away from the crowd, there were no injuries on the ground. The debris fields stretched 1,200 feet.